Home for the Holidays

Image Credit: Home for the Holidays, 1995

After a stressful month at work, I am VERY ready to relax with a bounty of food and a pile of movies. I always look forward to Thanksgiving because it means I get to stay home, in the city I love, with my husband and my dog and do absolutely nothing. Christmas can get a little crazy, but Thanksgiving- that’s just for me. Of course it wasn’t always like that. I’ve had my share of awkward relatives and inedible meals, which is why I have such an appreciation for this week’s film Home for the Holidays (DVD). When you find yourself laughing and nodding along, saying, “YES! This is what it’s like!!” you know you’ve found a great movie.

Home for the Holidays was directed by Jodie Foster and tells the story of the Larson family as they come together for one grand Thanksgiving meal. Holly Hunter is as charming as I’ve ever seen her, fleeing her recent unemployment and sexually active teenage daughter to go get criticized by her mother in a big puffy coat. Robert Downey Jr. shines as her younger gay brother Tommy, and together they team up against their bigoted uptight sister Joanna. Anne Bancroft is amazing as the matriarch, and the scenes of her flirting and arguing with her onscreen husband played by the late, great Charles Durning are forever endearing (see my earlier post about 5 Times Anne Bancroft was EVERYTHING). Of course I’m a sucker for a spinster aunt, and it doesn’t get better than Geraldine Chaplin’s Aunt Glady. She hates orange lipstick, she likes to get drunk and tell inappropriate stories, and she keeps her bathroom as clean as a whistle. In short, she’s me in 40 years. Dylan McDermott pops up as a dreamy love interest for Holly Hunter, but really it’s the family dynamics that make this such a joy to watch. As Hunter’s Claudia says, “We’re family- we don’t have to like each other”.

If you want to be as toasted as Aunt Glady on the big T-Day, you’re going to need a tasty cocktail. This year I’ll be making a drink the same color as Claudia’s stylish puffy coat. It pairs nicely with stuffing, mashed potatoes, and snarky comments at the dinner table. While watching Home for the Holidays, I recommend drinking a Cranberry Mule.

Lime and fresh cranberries for garnish

Build drink in a glass over ice.  Garnish with a lime slice and fresh cranberries. 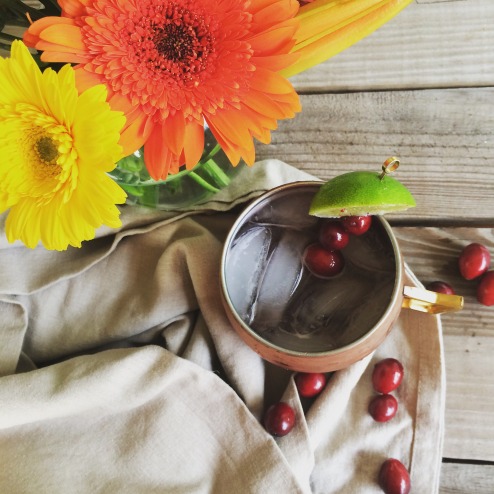 I don’t want to sound like I don’t look forward to seeing my family. I do, of course. But often people get so tied up in making the holiday great that they forget what’s really important. By important, I of course mean Pillsbury crescent rolls, and the relief one feels at realizing your life isn’t as bad as sad sack Russell Terziak’s. That’s always something I’m thankful for. Cheers!

Five Times Anne Bancroft was EVERYTHING

I’ve featured Anne Bancroft films a couple of times on Cinema Sips recently, and it’s made me realize that the woman is just amazing. Her style, her sense of humor, her way of elevating even the worst script- she’s a legend for a reason. In my 20’s I idolized Audrey Hepburn (doesn’t every girl have an Audrey phase?) but now that I’m a little older, I’m all about Anne Bancroft. Here are my five picks for when she was EVERYTHING.

Leopard print for days. Those tanned, toned legs. That withering stare. How could Benjamin Braddock ever resist?

Image credit: Home for the Holidays, 1995

Sure she wears unflattering winter coats and chain smokes in the pantry, but she’s still the mom that makes us want to come home for the holidays. And the bunion sneakers! I die. 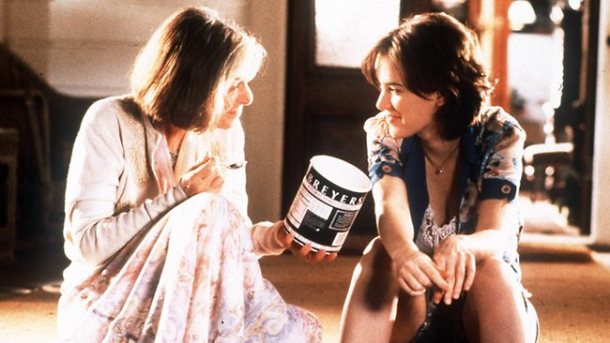 Image Credit: How to Make an American Quilt, 1995

In the grand tradition of Anne Bancroft being the best thing about literally every crappy movie she’s in, Aunt Glady makes me smile as she sings along to Neil Diamond and gets high on the porch. And eats an astonishing amount of ice cream. 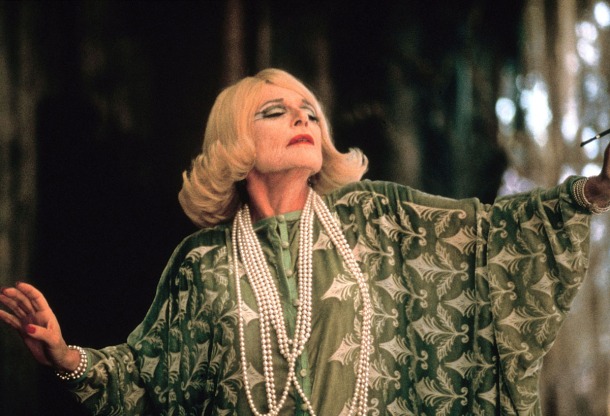 She had me with the crazy eye liner and predilection for martinis. And then she went red. Even though her bedroom smells like cat piss, I still want to move in.

Iconic and chic right up until the end, it seems fitting that one of Anne Bancroft’s final performances was alongside her devoted husband Mel Brooks. Because love and laughter are the best accessories a woman can have. Although her pink gloves are pretty fabulous….

Posted in Top 5 Lists and tagged Anne Bancroft, Curb Your Enthusiasm, Great Expectations, Home for the Holidays, How to Make an American Quilt, movies and cocktails, The Graduate. Bookmark the permalink. 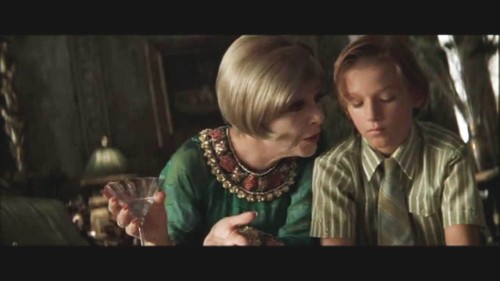 I’ve thus far featured a couple of films during Literary Adaptation Month that have stayed pretty close to the source material.  This week however, I’ll be watching an adaptation that uses the original book as inspiration, but then veers wildly, excitingly off course.  A long-time favorite film of mine is Alfonso Cuarón’s 1998 version of Great Expectations (DVD/Download). Based on the novel by Charles Dickens, this film captures the classic Dickensian struggles of wealth vs. poverty and good vs. evil, while updating it for the modern era.

In the Cuarón version of Great Expectations, Pip is renamed Finn, and played by Ethan Hawke. A very bored Gwyneth Paltrow plays Estella, the focus of his unrequited love. Robert DeNiro’s portrayal of convict Lustig (Magwitch) is still a career highlight to me, and Anne Bancroft shines as Ms. Dinsmoor (aka Miss Havisham). I absolutely want to be Ms. Dinsmoor when I get old, sitting in a Florida mansion, drinking martinis, wearing crazy wigs and listening to Bossa Nova records. Strike that- can I just start that life now?? In this version, Finn becomes an artist (side note: I’m madly in love with the Francesco Clemente paintings and drawings done for the film), and Lustig’s secret patronage lures him to New York, and Estella. Great Expectations relies on visuals a great deal, and it’s this beauty (and the lovely words written by David Mamet in the voiceover narrations) that keep me coming back time and again.

A common visual motif in several of Alfonso Cuarón’s films is the color green. It’s been characterized as the color of hope, and in this film that could not be more true. Finn is always hopeful, even when he shouldn’t be. Cuarón seamlessly weaves the color into nearly every scene, through the lush tropical backdrops, Finn’s paintings, the costumes, and most notably in Gwyneth Paltrow’s TO DIE FOR Donna Karan dress. It’s so fabulous, I just have to share:

For my drink this week, I’m picking up on that green motif and mixing up a martini that Ms. Dinsmore would surely be sipping in her gilded bedroom. While watching Great Expectations, I recommend drinking a Paradiso Perduto.

Mix all ingredients in a cocktail shaker filled with ice. Shake until chilled. Strain into a chilled martini glass. 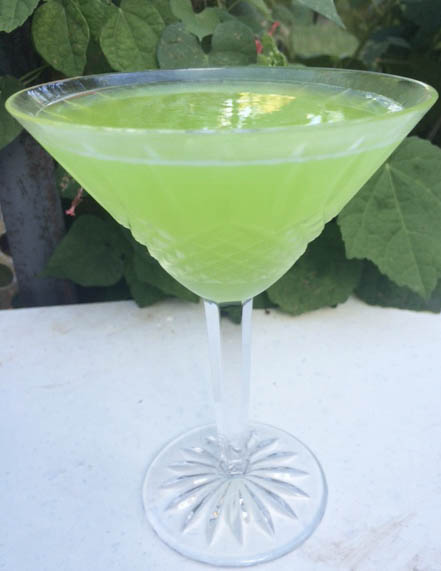 I’m not usually one for radioactive-looking cocktails, but this one is actually quite tasty.  And with such a visually-focused film, why not match it?  There have been other Great Expectations adaptations, and I expect there will be several more in the future, but this one will always be special to me.  Modern art, martinis, and Donna Karan-  what’s not to love?  Chicka-boom!

One of my favorite movies to watch in the summer is Mike Nichols’ classic The Graduate (DVD/Download). The image of Dustin Hoffman floating aimlessly in a turquoise pool while his dad harasses him about his plans for the future makes me long for hot summer days free from responsibility. Now there’s work, and blogging, and writing, and all the normal things that come with being an adult. But for a typical 21-22 year old, the biggest thing that’s expected of you is remembering to put on sunblock. Those were the days.

The Graduate is essentially a film about relationships. Dustin Hoffman’s character Benjamin Braddock begins an affair with the older Mrs. Robinson, then later falls for her daughter Elaine. A weird, disturbing love triangle ensues, and I’m not even sure I want him to end up with the age-appropriate but fickle Elaine. By the end of the movie, I just want Benjamin to leave Pasadena and finally start that career in plastics. As a recent college graduate, he wanders through life looking perpetually depressed, even when lying next to sexy Anne Bancroft in a hotel bed. She’s absolutely the best thing in this movie, and I’m still stunned that she was only 36 when she was cast.  Frankly, I might have been better off not knowing this little piece of trivia (since that’s currently only 4 years older than me.  Yikes.).  The other thing that draws me into this film is the Simon & Garfunkel soundtrack. It always reminds me of the summer when I was 11 or 12 years old, waiting all day for the Pittsburgh oldies radio station to play “Mrs. Robinson”. If I was really lucky, I’d get to hear it more than once over the span of the afternoon. (Kids today- they have no idea what it was like before iTunes.)

For a sophisticated, mature, fashion-forward woman like Mrs. Robinson, who makes even leopard print seem classy, I’m mixing up a drink that fits her lifestyle. Bold and refined, this cocktail recipe was something I found in the fabulous book Death & Co: Modern Classic Cocktails (a true must-read for any cocktail aficionado). While watching The Graduate, I recommend drinking an Elder Fashion.

Stir all ingredients over ice, then strain into a glass containing 1 large ice cube. Garnish with a grapefruit twist.

My favorite scenes take place in Mrs. Robinson’s swanky living room bar. I have no words to describe how much I love the décor. If I could decorate my whole house in her Palm Springs/vintage style, I totally would (as it is, I settled for just my living room). She may be kind of a crazy mess, but Mrs. Robinson will always be an icon of sophistication. Cheers!