As part of my New Year’s resolution this year, I decided to stop procrastinating and actually start (and maintain) a Cinema Sips Twitter page. Something I said I’d NEVER do, but Facebook’s commercialization and subsequent ransoming of business pages has forced my hand. Plus, Twitter has jokes. Lots of jokes. Being the newly tech savvy person that I am, I got to thinking of those halcyon early days of Facebook. Back when it was like a secret club, invite only, with nary an ad in sight. If you weren’t between the ages of 18-25 in 2004, and don’t believe me, just check out this week’s film, The Social Network (DVD/Download).

Fun fact: Mark Zuckerberg and I went to college at the same time, and we’re nearly the same age. Except he’s, well, Mark Zuckerberg and I’m just some girl writing this little blog and spending too much money at the liquor store. While he was writing code and inventing Facebook, I was sitting in a dorm room watching Christopher Guest films on repeat. I find The Social Network to be mildly depressing, in an “oh my God, I’ve done NOTHING with my life” kind of way, but I also consider it to be an exhilarating, entertaining film about the early days of a huge digital revolution. Jesse Eisenberg’s Aspberger’s-meets-asshole performance is quite skilled, and I particularly love Justin Timberlake as Sean Parker. And the Winklevoss twins! I totally think there should be a remake of Rope starring Armie Hammer and Armie Hammer as the Leopold and Loeb characters. How creepy would that be?

Apparently these Silicon Valley bigwigs like their girly drinks. Far too many appletinis get consumed in the road to Facebook world domination. Thus while watching The Social Network, I recommend drinking a classic millennial cocktail, the Appletini. Normally I’d never advocate for a pre-made mix, but A) it’s pretty tasty, and B) I’m too busy on Twitter to deal with anything else this week.

Combine appletini mix together with vodka in a cocktail shaker filled with ice. Shake until chilled, then strain into a cocktail glass with a maraschino cherry at the bottom. 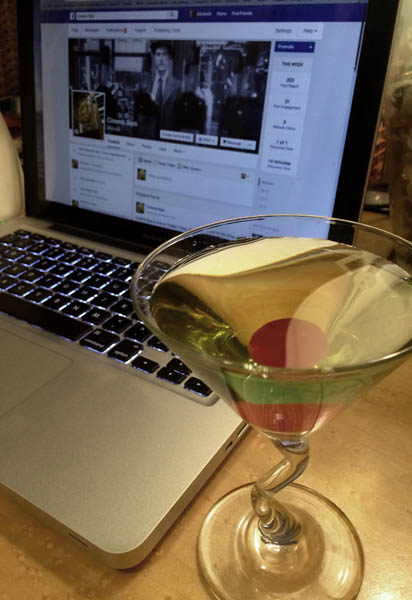 Everyone likes to talk about how Facebook has gone downhill, and in a lot of ways it has. I hate the ads, and the sponsored posts, and having to see what all of my friends are “liking” and commenting on at any given moment. For the most part, I just don’t care. But I admit, Facebook has made the world a pretty great place to be. Now I can connect with friends that I would have lost touch with ages ago had I been dependent on just a phone or email address. Sure, I’ve got some geriatric relatives trolling my posts, but you take the bad with the good. And if you’re a fan of the Cinema Sips Facebook page, you’ve got a place to interact with other like-minded movie and cocktail aficionados. So go ahead- Facebook me. Cheers!