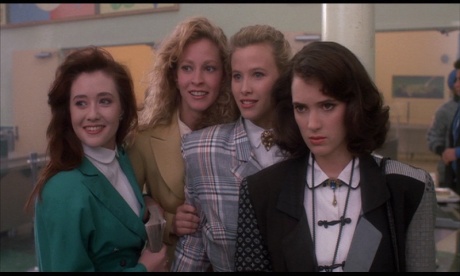 I’m concluding High School Month on Cinema Sips with a classic dark comedy. 1989’s cult hit Heathers (DVD/Download) was a pretty big departure from the heartwarming teen romances seen in John Hughes films from that decade. In this film, Winona Ryder and Christian Slater romance each other over dead bodies and games of strip croquet. As a whole, the film is disturbing, hilarious, and absurd- kinda like high school, right? Plus, it’s even funnier with a cocktail, and how excited am I to finally be using some of that Blue Curaçao I bought for a Breaking Bad party?? We’ll get to the mug of blue liquid in a minute.

For those who haven’t seen it, Heathers is sort of a twisted version of Mean Girls. Winona Ryder plays Veronica, a smart, pretty girl who is invited to be part of the Heathers clique (and by “Heathers clique” I mean that all the girls in it are named Heather). In the 90’s my school was filled with Jennifer/Jen/Jennie’s, so it’s pretty easy to see how this clique could happen. I’m currently waiting for a remake of this movie called Emmas, or Madisons. But I digress. In Heathers, Winona Ryder meets Christian Slater’s character JD, and together they accidentally (then on purpose) start murdering the popular kids, while making the murders look like suicides. Pretty soon the whole school is caught up in suicide fever, which causes some truly so-awful-but-so-funny moments (ie. Martha Dumptruck hurling herself in front of traffic with a suicide note taped to her Big Fun t-shirt). My favorite part is definitely when the two homophobic football players meet their doom at the hands of “ich lüge” bullets, and Christian Slater sets it up to look like a gay suicide pact, placing bottles of mineral water and Joan Crawford postcards on the bodies. As I said before- disturbing, hilarious, and absurd.

My drink this week references the demise of queen bee Heather Chandler, who drinks a mug full of drain cleaner and face plants into a glass coffee table. Obviously, my drink has to be blue, and served in a coffee mug. Some great blue drinks come out of the world of tiki cocktails, and I am very excited this week to be sharing one. When watching Heathers, I recommend drinking a Big Blue Freeze.

Combine all ingredients in a shaker filled with ice and shake until chilled.  Fill a mug 3/4 full with crushed ice, and pour mixture over top.

Although Heathers was a pretty big box office bomb, I am so thrilled that generations of teenagers are now seeing and loving this movie. It was definitely ahead of its time, and I credit it with being the foundation upon which great movies like Mean Girls and The Virgin Suicides were built. I read an article recently about the sudden nostalgia for Heathers, which has even spawned an off-Broadway musical. I’m not sure how I feel about a theatrical adaptation of this amazing film. Honestly, I think I’d rather sit at home watching the original and popping popcorn with Martha Dumptruck. How very. Cheers!