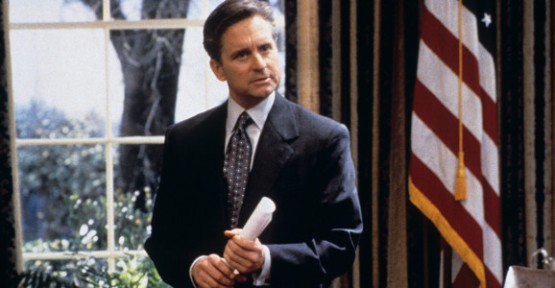 One more day. One more day and what has been the most contentious presidential election that I can ever remember will finally be over. Whoever wins, whatever side you’re on, I think we all can agree on one thing- politics is a lot more pleasant in Hollywood.

Perhaps the best example of this is The American President (DVD/Download), starring Michael Douglas as a widowed POTUS and Annette Benning as his feisty lobbyist girlfriend. Written by West Wing creator Aaron Sorkin and directed by Rob Reiner, this 90’s era romantic comedy just sparkles in its idealism. A president wooing his lady with a Virginia ham and glamorous state dinners? Taking dating tips from his pre-teen daughter? Adorable. And what’s also great is that Annette Benning is no pushover. She stands by her environmentalist beliefs, is unafraid to tell the president that his crime bill is too soft, and does it all wearing some killer pantsuits. Her only enemy? Dupont Circle. And Republicans.

Despite the attacks from political opponents, the President still manages to find time to spirit his girlfriend away to Camp David. A night in front of the fire in a secluded cabin?  Sounds like heaven.  The only thing that would improve it?  A cocktail of course! While watching The American President, I recommend drinking a Sparkling Maple Whiskey Cider.

Combine all ingredients in a glass filled with ice and stir gently to combine.

I try not to get too political on social media or on this blog, because of course I respect the opinions of others and I never want to sound like I’m belittling anyone who thinks differently than I do. We all have our reasons for supporting a particular candidate. But isn’t it great that cocktails are completely non-partisan?  Republicans and Democrats alike enjoy unwinding with a tasty beverage.  If you’re looking for an escape on election night, I proudly endorse this Hollywood political fantasy, and a strong cocktail (or three).  Cheers!