Living in Austin, it’s hard to escape the name Matthew McConaughey. Our local celebrity keeps popping up everywhere from University of Texas classrooms to the New York Times Bestseller list, and now there’s even talk about seeing him on the ballot one day. This former Dazed & Confused burnout has come a long way, but there is one particular stop along his long and winding journey that was truly unforgettable: the role of Dallas in Magic Mike (Disc/Download).

Say what you want about this crazy Texan, but it takes guts to strut around onstage in nothing but a g-string and cowboy hat. This Steven Soderbergh film about a Tampa male revue club could have easily been swallowed up by campy dance numbers and too many penis jokes (See: Magic Mike XXL). Don’t get me wrong, it still has those. But it also shows us the gritty underbelly of this sex and drug-fueled world. The odd thing about Magic Mike is that for a movie about sexual desire, there’s very little about it that’s sexy to me. So what are we left with? Raw performances, surprisingly beautiful cinematography, and the magnetic screen presence of McConaughey. Like a greasier version of Cabaret‘s Joel Grey, the Master of Ceremonies keeps us engaged, even when we think we’ve reached our limit of screaming women and wet one-dollar bills. Sure, there’s a lot to make fun of in this movie (Channing Tatum’s “furniture line” comes to mind), but this flashy scene-stealer is not one of them.

Now, I have a theory that Dallas is the original “Florida Man”, giving rise to a whole subgenre of trashy urban legends. Can’t you just see him pulling a gun on a McDonald’s employee because the McFlurry machine was broken? Let’s channel some of that Florida energy with a cocktail fit for your girlfriend’s bachelorette party at Xquisite, the Strawberry Mojito.

Muddle strawberries and mint with simple syrup and lime juice. Add Rum and ice to the shaker, and shake until chilled. Double strain into a glass filled with ice, and top with club soda. Stir gently to combine, and garnish with mint and lime twist.

As someone who has been to an all-male revue exactly one time (shout out to Thunder From Down Under!!!), I can say that the real thing is every bit as cringe-inducing as it looks in this movie. If your friends try and convince you it’ll be fun, just politely sit them down and suggest watching Magic Mike instead. You’ll save your eardrums, and your dignity. Cheers! 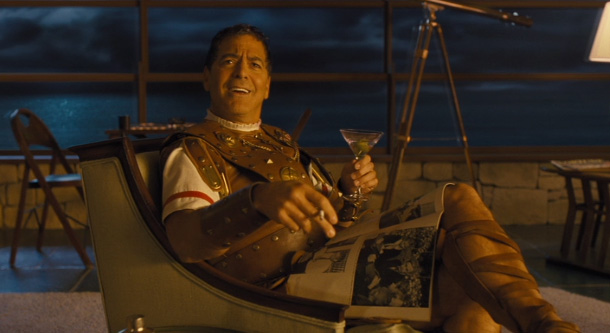 It was with a heavy heart that I had to exclude this week’s film from my Top 5 Films of 2016 list last month. If it had been the Top 6 films, Hail,Caesar! (DVD/Download) would have certainly been included. My only hesitation? That I might be among a small minority of people who think this film was hilarious and brilliant. Thankfully, the Coen Bros. are doing their part to keep classic film buffs like me happy. Trendiness be damned.

Hail, Caesar! is a screwball satire of the 1950’s Hollywood studio system, where genre films were churned out at an alarming rate, and the scandals of the stars got handled by the studio’s “fixer”.  Eddie Mannix (that name!!!) has his work cut out for him as he deals with blockhead matinee idols, kidnapping plots, pregnant mermaids, communist musical stars, not to mention threats from competing gossip columnists (both played splendidly by Tilda Swinton). And you thought Hollywood in the 50’s was idyllic? Would that it were so simple.

I knew I loved this picture when the Frank Lloyd Wright house from A Summer Place came on the screen. Situated on the beach in Carmel-by-the-Sea, it has a classy, retro, Bond-villain appeal to it. Perfect for a bunch of intellectual communist sympathizers, and the kind of house that begs you to sit back and relax with a cocktail. While watching Hail, Caesar! , I recommend drinking a Red Scare Martini.

Combine ingredients in a cocktail shaker over ice, and shake until chilled. Strain into a chilled martini glass, then garnish with a twist of lemon.

One of the true delights of watching this film is seeing Channing Tatum channel Gene Kelly in his musical dance number. I haven’t seen such joyous, athletic grace in a musical since, well, Kelly himself. Maybe Hail, Caesar! wasn’t the biggest box office success, but it felt like a special gift to fans like me. My message to Joel & Ethan Coen: you keep making your films, and I’ll keep championing them. Cheers!