After 3 years of choosing Christmas films for Cinema Sips, I’ve reached my limit on festive family-friendly fare. If you’re looking for It’s a Wonderful Life or Love, Actually, you may want to scroll back a year or two. Since many of us currently feel like we’re living in a bizarre reality of “alternative facts” and a bleak future where The Day After Tomorrow is suddenly not so far-fetched…. Dystopian Christmas seems right. Kicking things off is Stanley Kubrick’s final film Eyes Wide Shut (DVD/Download).

I think Stanley Kubrick himself must have been positioning Eyes Wide Shut as an unconventional Christmas movie. Why else would such a master of visual style put a garish Christmas tree in LITERALLY EVERY SCENE? Maybe that’s a good drinking game- take a sip every time you spot a tree with colored lights.  Too often, the dialogue between Cruise and Kidman seems to drag, like that fight you’ve had with your spouse that lasted about two hours longer than it should have. You know you’ve been saying the same thing for the last forty-five minutes, but you just can’t stop. Maybe that’s both the problem, and point of this movie. Tom Cruise’s character stumbles onto a hidden Manhattan sex ring, tempting him away from his beautiful wife and child, but even after things turn sour, even after it becomes dangerous, he can’t quit his obsession. Kubrick was notorious for being a slowpoke auteur, and one wonders what changes he might have continued to make to the final cut of this film had he not died before its release. In the end we’re left with a powerful, beautiful, flawed product that’s just weird enough to be brilliant.

The true star of this film (in my opinion) is Nicole Kidman. Her character Alice is a complicated mess, torn between her desire for a stable family life and her illicit desires. Only when she becomes drunk or stoned do we see the real Alice emerge. Lit from behind in Kubrick’s indigo blue light, her pale skin seems otherworldly. While watching Eyes Wide Shut, I recommend drinking a Midnight Kiss.

Combine first three ingredients in a shaker filled with ice.  Stir until chilled, then strain into a champagne flute.  Top with chilled champagne, and garnish with a lemon twist. 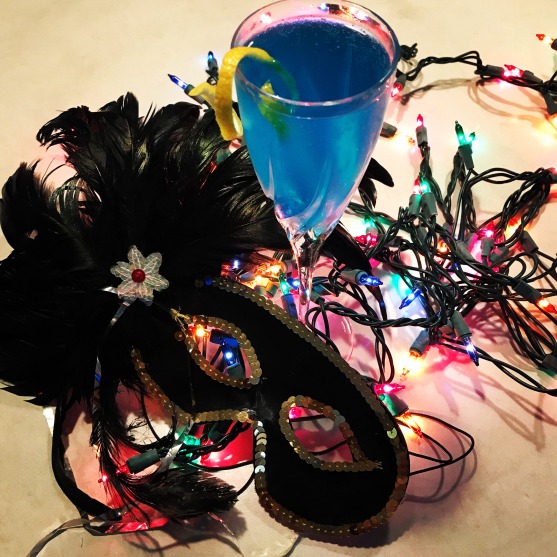 During this movie, Tom Cruise has quite possibly the longest night in the history of nights. He goes from fighting with his wife, to comforting a dead man’s family, to flirting with a beautiful prostitute, to having a drink in a jazz club, to buying a costume, to crashing an orgy, to hiding the evidence back home- all before sunrise. After awhile, you wonder how far past midnight, and normalcy, he’s ventured. Whether you view it as a dream or a nightmare, Eyes Wide Shut will make you realize that there are many things in life we’ll never fully understand.  The fun, and the frustration, is in the trying. Cheers!