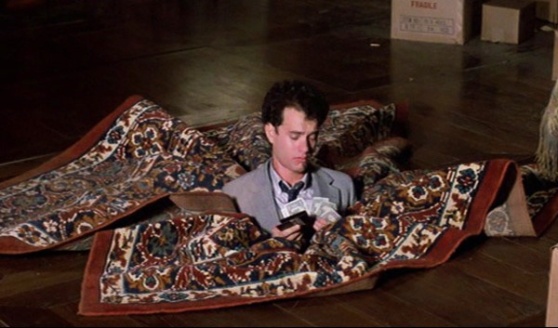 As I embark on my first major home renovation, one image keeps streaming through my head- Tom Hanks, clinging desperately to a staircase, as his house collapses around him. Granted, my project is just a simple kitchen, but it’s still shocking how quickly even the smallest project can become like The Money Pit (DVD/Download). Budget? Double it. Time? Double it. Sanity? Kiss it goodbye.

I was lucky to find a house that didn’t need a lot of initial work when I moved in eight years ago, unlike Tom Hanks and Shelley Long in The Money Pit. They land a bargain on an enormous mansion, only to find that it needs a staggering amount of renovation. Costs spiral as their relationship implodes, and this funny 80’s slapstick comedy becomes a cautionary tale of home ownership. It’s no wonder Shelley Long is basically drunk throughout this process -my own bar is also heavily stocked! Maybe then I won’t care when workers show up late (if at all), or when my house is enveloped in a cloud of dust, or when my savings account dwindles before my eyes. Enough martinis and you can survive anything.

As anyone who’s ever done a home renovation can tell you, the contractor is king.  Actually, he’s like a mythical creature who you pay enormous sums of money to, before waiting around hopelessly for an encore appearance.  The Shirk Bros. embody this archetype perfectly, and that name- spot on.  In ode to their musical tastes, while watching The Money Pit I recommend drinking an I Gotta Bee Me Martini.

I Gotta Bee Me Martini

Combine honey and warm water in a cocktail shaker and stir it until the honey is dissolved. Add vodka, lemon juice, and ice and shake vigorously until chilled. Strain into a cocktail glass.

This cocktail seems easy enough for me to make while I’m held hostage in another part of the house for a week (or two, or three- we’ll see). Luckily I have a partner who’s in this all the way with me; someone who won’t accuse me of seducing an ex to pay for a new oven. After all, he knows I hate to cook. Cheers!