I recently discovered a great web series on YouTube called Yacht Rock, a fictional account of 70’s and 80’s-era easy listening titans (yes it came out 10 years ago, and yes I am severely behind the times). If you haven’t seen it yet, check it out- I died laughing. One of the soft-rockers featured is Christopher Cross, who had a major hit singing “Arthur’s Theme” from the Dudley Moore classic film Arthur (DVD/Download). I’ve featured this movie once before on my Top 5 Drunken Movie Performances list, but I think it deserves a mention again, along with a cocktail pairing.

Arthur is the story of millionaire playboy Arthur Bach, who spends most of his days and nights intoxicated, verbally sparring with his deliciously sarcastic butler Hobson. He is pressured by his family to propose to the beautiful but boring Susan, however just before he does, he meets a firecracker from the wrong side of the tracks, played by a very young Liza Minnelli. Even setting aside my excitement at seeing “Lucille 2”, this movie delights me to no end with its witty script, and superb drunk acting by Dudley Moore. He’s just the right amounts of happy and pathetic, and I find myself rooting for him to continue living his carefree, liquor-tinged life, only with the right girl by his side. And by “right girl”, I do not mean the hooker with the Olivia Newton John spandex pants.

Now, when you get caught between the moon and New York City, the best that you can do (in my opinion) is pour a drink! This week I’m adding a new bottle to my liquor cabinet in the form of moonshine. Specifically Texas Moonshine, as a nod to the cowboy hat that Liza Minnelli inexplicably sports on the streets of Manhattan. While watching Arthur, I recommend drinking a White Manhattan.

Add liquid ingredients to a cocktail shaker over ice and shake until chilled. Strain into a martini glass and garnish with an orange twist. 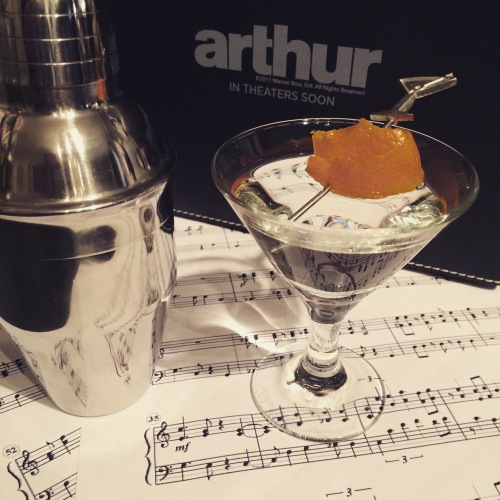 If I met Arthur in real life, I’d probably be annoyed-slash-jealous at his life situation. But as a movie character, he’s my hero. Someone who can drink that much and still come up with hilarious, brilliant one-liners deserves to be applauded. And as for the Christopher Cross song- well, good luck getting that out of your head for the next week. Cheers!