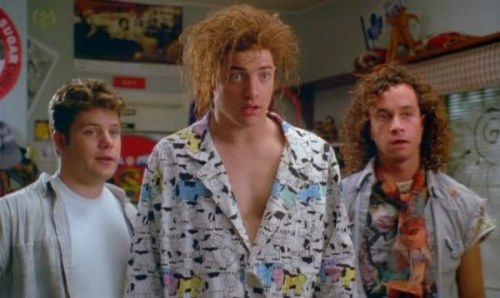 As Cher Horowitz once so wisely said, “Searching for a boy in high school is like searching for meaning in a Pauly Shore movie.” With that in mind, please know that I find absolutely no deep meaning in this week’s film Encino Man (DVD/Download). It’s simply a funny 90’s time-capsule, where high school students were played by 25-year olds, going to 7-Eleven for a Slurpee and a microwave burrito was still a thing, and even with WAY too much hair product and baggy surfer clothes, Brendan Fraser was hot.

Encino Man is about two high school seniors (played by Sean Astin and Pauly Shore) who uncover a caveman frozen in ice while digging for a swimming pool. They thaw the ice, and a muddy Brendan Fraser emerges. Somehow, a mute, dreadlocked caveman is considered cool in high school, and “Link” (as in Missing) manages to elevate the popularity of the dorks who dug him up. They go up against the resident jock bully, and Sean Astin tries to win the heart of the most popular girl in school. Also, we get an introductory lesson into Pauly Shore-speak. I still don’t know what “weezing the juice” means exactly, and I’m not sure I want to. However, his assertion that Sweet Tarts are part of the fruit group is something I strongly agree with.

The catastrophic event that caused Link’s burial was a massive earthquake, followed by a mudslide. I don’t know about you, but I’m officially ready for frozen drink season to begin. While watching Encino Man, I recommend drinking a Frozen Mudslide.

Blend alcohol with ice cream. Swirl chocolate syrup around inner edges of a glass. Pour frozen drink into the glass and top with whipped cream and more chocolate syrup. 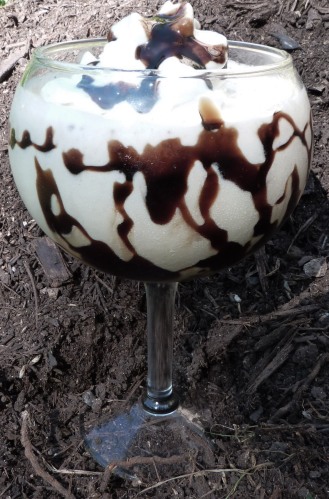 This movie brings back so many childhood memories of lazy Saturday afternoons in front of the TV. I’m a little annoyed that I’m still able to quote certain scenes word for word. What other useless trivia is my mind storing? Is that why I can’t remember genuinely important things now like my bank account number or the proper ratio of Cointreau to tequila in a margarita? Too many crap movies as a kid? Oh well, the damage is done I suppose. Cheers!