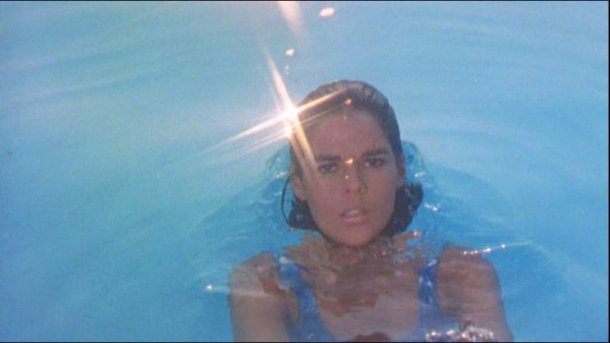 For many years, I’ve been slightly obsessed with photography and paintings depicting beautiful people in swimming pools (Slim Aarons and his society poolside photos are definite favorites of mine). How thrilled I was then, to discover a film that captured this beauty on celluloid. No longer were these subjects frozen in time, but finally, swimming through crystalline waters surrounded by concrete and sunbathers. The film I’m excited about this week is Goodbye, Columbus (DVD/Download). Based on the novella by Philip Roth, it stars Ali MacGraw as a college-aged Jewish-American-Princess, who is very attached to her wealthy family. She begins dating Richard Benjamin’s character, who is a lower class Jew working as a librarian in the Bronx. Class differences and parental interference create conflict in their relationship, but nevertheless they spend a glorious summer playing tennis, lounging poolside, and attending parties.

Released in 1969, Goodbye, Columbus was an early film in Ali MacGraw’s frustratingly short career, made even before she did Love Story. It’s sometimes difficult for me to watch her in this, just because she’s SO beautiful. Truly, she has that kind of naturally perfect skin and hair that makes you think she must just wake up looking camera-ready. Her clothes in this film are also stunning. Cute 60’s bikinis, tennis whites, and later, pleated skirts and pea coats after the summer ends- they’re all just fabulous. The film is a frank look at relationships between college-aged young adults, and in many ways reminds me of The Graduate. Richard Benjamin’s character is searching for something, and he stupidly thinks he’s found it in a smart, beautiful girl whose affections run hot and cold like tap water.

My drink this week was inspired by one of my favorite scenes in the book. It was given short shrift in the film adaptation, but I still think about it every time I see cherries suddenly appear in my grocery store’s produce section. In the novel, Roth describes the sheer opulence of a wealthy family’s refrigerator. Filled with a bounty of delicious fresh fruit, it’s a sight that the main character would never have experienced in his own home. He takes a cherry from a bowl, but is then immediately caught by his girlfriend’s annoying little sister. It’s ridiculous, of course the cherries are there for all to enjoy, but it’s such a foreign concept to him that he becomes embarrassed. Therefore, I’m urging my readers to go crazy this week- buy cherries and actually eat them with abandon! This week, I’m serving up a Cherry Gin Sling.

In an empty highball glass, muddle one cherry. Fill the glass with ice. Then, in an ice-filled cocktail shaker, add gin, Cointreau, and lime juice. Shake to chill. Pour into ice filled glasses, then top with cherry soda, to taste. Garnish with cherries and lime wheels.

This is a great summertime drink that can be served up at backyard parties. Cherries are my absolute favorite fruit, and if I had been confronted with a giant bowl of gleaming cherries like this character, I would have dove in head first. Plus, I love using seasonal ingredients in my cocktails whenever I can. So mix up your gin sling, and get ready to enjoy watching Ali MacGraw frolic through summer while poor Richard Benjamin just tries to keep up. Cheers!