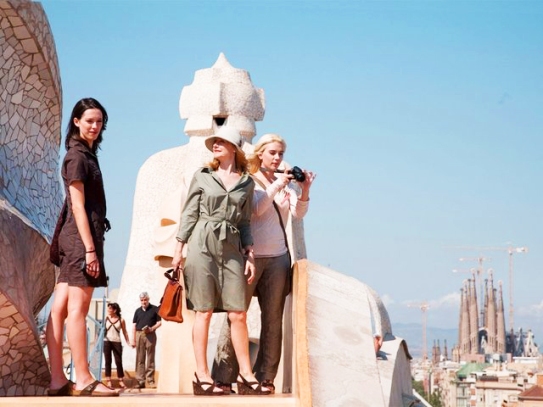 Yes, yes, I know, Woody Allen is cancelled.  But you know what isn’t cancelled?  My trip to Barcelona!  That’s right, Cinema Sips is headed to España this week, where I intend to drink all the cava in the city before flying off to a Menorcan cheese farm (because wine + cheese is YES).  To give all you readers a taste of my getaway, I’m featuring a movie steeped in Gaudí, glasses of Rioja, and strong female performances—Vicky Cristina Barcelona (Disc/Download).

Starring Scarlett Johanssen and Rebecca Hall, this film about two American students and their romantic entanglements with a Spanish artist (Javier Bardem) feels like a step back in time. It’s the sort of dialogue-heavy, sexually freewheeling, location-specific movie that would have gotten made in the early 1970s, before focus groups and big budgets sucked the life out of everything. Shot in Barcelona and the small city of Oviedo, the country of Spain is its own character within the story—costumed in sun-drenched days, mosaic-covered buildings, and red wine-stained tablecloths.   I love films where the setting is key, and truly I don’t think this story could happen anywhere else.  You need the passion and fiery history of this place to make sense of Penélope Cruz’s crazy ex-wife character Maria-Elena, who goes toe-to-toe with her real life husband Bardem in an Oscar-winning performance. It just wouldn’t have the same impact if the film was shot in, say, London.  The viewer needs Spain to understand that sometimes, women go a little crazy.  I blame the absurdly low price-point of wine.

Speaking of booze, I may have gone over my weekly quota at this point.  But when it’s cheaper than Diet Coke, AND I’m on vacation, what’s a girl to do? While watching Vicky Cristina Barcelona, I recommend drinking a glass (or three) of Red Wine Sangria.

Combine wine, brandy, orange juice, and sugar in a pot over heat until sugar dissolves.  Add the fruit, and refrigerate until chilled, about 1 hour.  Once chilled, add the club soda.  Serve in glasses over ice. 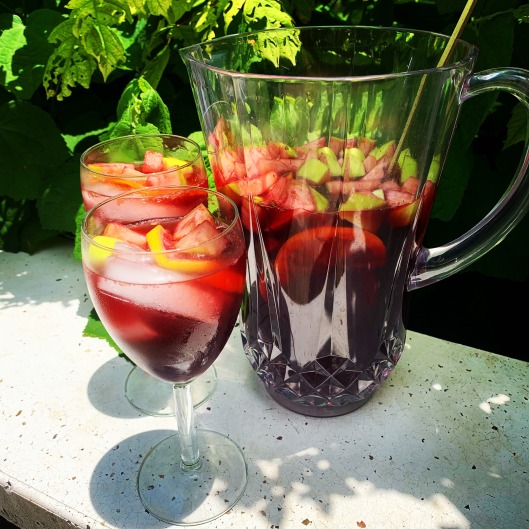 The thing about Vicky Cristina Barcelona is that none of the characters are likeable.  They’re all incredibly self-indulgent, make terrible choices, and betray one another left and right.  And yet, I really enjoy it.  Maybe I want to live vicariously, to imagine what it would be like to run off for the weekend with a sexy Spanish artist.  But when it comes down to it, I think I prefer running off for a whole lifetime with a sexy American artist.  Cheers!