I have absolutely no idea what’s happening in the world of professional sports right now, but I’m guessing things are not normal. If you’re missing your peanuts and CrackerJack, and starting to wonder if you’ll ever get back, then allow Cinema Sips to tide you over with a classic baseball flick, The Bad News Bears (Disc/Download). Featuring an alcoholic coach, a feminist pitcher, and a ton of salty language, this 1976 ode to Little League and Southern California will have you experiencing all the flavors of summer.

In this perfect time capsule of a movie, Walter Matthau plays Buttermaker, a retired Minor League pitcher and current pool cleaner of the San Fernando Valley. He accepts a gig coaching a team of all the kids who weren’t good enough to play on the existing Little League teams, thinking it’ll be an easy day in the dugout with a cooler full of beer. As the misfits and all their schoolyard problems start to get under his skin, he realizes he has an opportunity to give these kids a badly needed confidence boost. He recruits the talented Amanda (Tatum O’Neal) for her golden arm, motorcycle-riding delinquent Kelly Leak (Jackie Earle Haley) for his stellar batting average, and brainy Ogilvie (Alfred Lutter) to help him Moneyball the heck out of this league. Buttermaker’s strategy works, and eventually the Bears start winning games. The script is genius, but it’s the realistic performances that make me come back to this film year after year. I feel like I get to journey back to an era where people went inside a Pizza Hut to have dinner without irony, and a towheaded kid named Lupus could mix you the perfect martini.

Speaking of alcohol, it’s kind of amazing that Coach Buttermaker could hand out brewskies to a group of eleven-year-olds after the game and it wasn’t all over social media the next morning. I’m sure he still got to keep his job, and I bet those kids didn’t even care that they lost. While watching The Bad News Bears, join in the fun with this Honey-Bear Shandy.

Combine vodka, honey syrup, orange juice, and lemon juice in a shaker filled with ice. Shake well until chilled, then strain into a glass filled with crushed ice. Add beer, stirring to combine. Garnish with an orange slice.

It’s Halloween this week, and perhaps you were expecting a monster movie—the kind with Boris Karloff in heavy makeup, maybe some weird lighting and a spooky soundtrack.  But I’ve got something even scarier for you: Charlize Theron, sans eyebrows, in a film about a woman on the edge.  Monster (Disc/Download) isn’t for the faint of heart, but if you can handle the intense drama, it offers a rare glimpse into the fear and violence of life on the streets.

Newscasters love to talk about how rare the female serial killer is, like a strange unicorn in a world of Dahmer’s and Gacy’s.  But similar to some of these higher-profile men, Aileen Wuornos has been abused most of her life, driven to a kind of madness that makes her actions almost inevitable. Her first killing is in self-defense, but the rest are portrayed by Theron as a sort of PTSD.  Like the collective trauma of being a woman in a world dominated by depraved men is simply too much to handle.  In contrast to all the other films of prostitute-as-“Party Girl/Model/Call Girl”, with their impeccable grooming and charming romantic subplots, Monster takes a hard look at the reality of prostitution.   Maybe she was always a cold-blooded killer, maybe she became one out of necessity. But when Aileen snaps, she SNAPS. Honestly, I wish she’d snapped a little more and killed her annoying, lazy girlfriend (played by Christina Ricci), but that’s a complaint for another day.

Before the blood spatter, the film showcases the tender romance between Aileen and Selby, two women both looking for a little comfort in a cold, hard world.  All they want is some beer, maybe a little whiskey, and a warm place to sleep that’s free of judgement.  While you’re watching Monster, pretend it’s ladies night at the local dive bar and cozy up with this Blood Orange Shandy.

Combine ingredients in a chilled glass.  Stir gently to combine, and garnish with an orange twist. 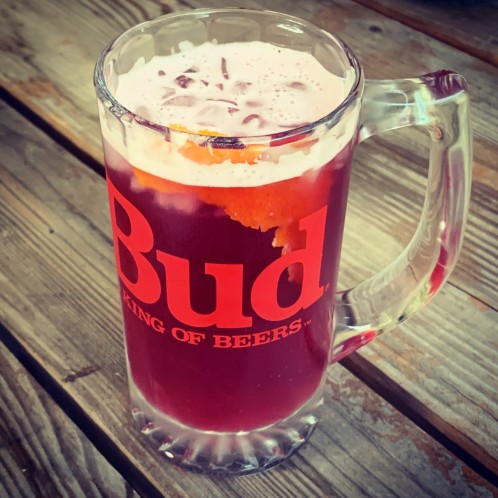 The thing that makes Monster so scary is that this story could conceivably happen to anyone.  Maybe I have some devastating medical expenses, my husband dies, parents are gone, I lose my house, my job, my skin cream, and I’m on the streets.  What would I do to survive?  It’s this thought sending shivers up my spine because the simple answer is: I don’t know (cue spooky music).  Cheers! 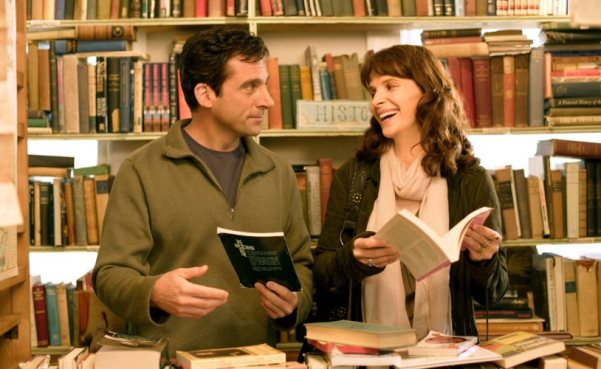 Fall is my favorite time of year, and not just because we’re finally entering Oscar-bait season at the multiplex. Rather, it’s a time I get to sit around my fire pit, drink spiced cocktails, and read a good book. If you’re looking for this feeling in cinema form, look no further than this week’s film Dan in Real Life (DVD/Download). Well-acted, well-written, and with enough charm to rival my favorite pair of fuzzy socks, it’ll put you in a seasonal mood in no time.

Dan in Real Life stars Steve Carell as a widowed advice columnist with three lovely, slightly resentful daughters. He takes his brood up to the family compound in Rhode Island for a weekend of crossword puzzles, pancakes, and chilly walks on the beach, only to be met with glares from his kids, pity from his siblings, and mild reproach from his parents. But then he encounters Juliette Binoche in a charming bookstore meet-cute and they hit it off like gangbusters…. until he realizes she’s already dating his brother. With a wonderful supporting cast including Dianne Wiest, John Mahoney, Alison Pill, and even Dane Cook in a surprisingly good performance, the movie sparkles with a rare combo of intelligence and sentimentality. I find myself wanting to be a long-lost cousin, visiting their lovely New England home for just a day. Even if it means I have to sleep in the laundry room.

A movie this sweet deserves a perfect Fall cocktail to go with it. There’s nothing that says Autumn quite like spiced apples, so while watching Dan in Real Life, I recommend drinking an Autumn Apple Sipper.

Combine ingredients in a mug over ice, stirring gently to combine. Garnish with a pinch of cinnamon. 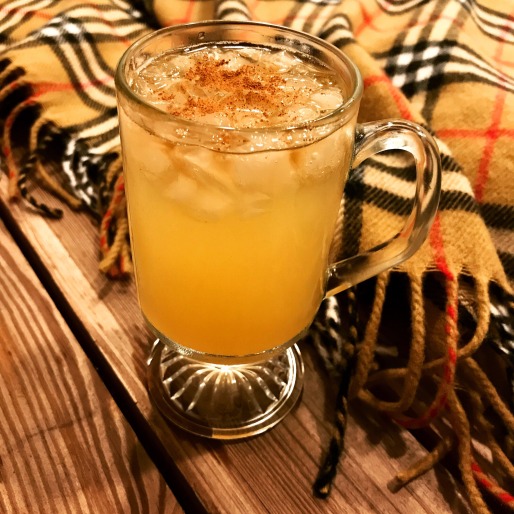 Steve Carell is the rare comic actor who is equally talented in dramatic roles, and Dan in Real Life is the perfect showcase for both sides of this coin- he’s at once charming and morose, funny and forlorn. I guarantee his rendition of “Let My Love Open the Door” will break your heart, just a little. If you think by now you’ve seen everything this guy can do, plan to be surprised. Cheers!

If you’re a frequent reader of this blog, then you’re probably a person who enjoys Hollywood awards shows as much as I do. The gowns, the terrible jokes, the uncomfortably awkward political acceptance speeches- I love it all. I’m not sure what or who the Hollywood Foreign Press Association is, but I do know that they put on one hell of an awards ceremony. It’s great to see film and television personalities drinking together in one room because my third love after films and cocktails is television. This is truly the trifecta for me.

My tradition when it comes to awards shows is to make a pot of fondue, a great cocktail, and lure my husband to the couch so we can make snarky comments about famous actresses together. This year, I’m using hard cider in both the fondue and the cocktail.

Muddle the lime and ginger together in a pitcher or large container. Top with beer, hard cider, and soda, and let sit for a few minutes to allow the flavors to combine. Pour over ice in a collins glass, and garnish with lime.

This drink is great for a crowd, or just for yourself. If you’ve got any non-drinkers in the group, substitute non-alcoholic sparkling cider for the hard stuff and leave out the beer. This is light enough that you can drink it all through the pre-show and the ceremony itself, and it goes very well with the fondue recipe.

Place the Camembert in the freezer for 30 minutes to firm the cheese. Using a sharp knife, carefully cut away and discard the rind, then coarsely chop the cheese. Toss the Camembert and Havarti cheese with the cornstarch and set aside.

In a large frying pan, melt the butter and saute the shallot until soft and translucent, about 3 minutes. Add 1 cup of the cider, and the lemon juice and bring to a low simmer. Gradually add the cheeses, a handful at a time, and stir gently until the mixture is creamy and the cheeses are completely melted. If it’s too thick, stir in more cider as needed. Transfer to fondue pot and enjoy!

I’m really looking forward to this year’s ceremony because I actually did see a staggering number of the nominated movies. In case you were interested, my favorite film of 2013 was Enough Said, but Inside Llewyn Davis was a close runner up. Regardless of who wins and loses, I know I can at least count on a great evening full of cheese, bread, and a golden, sparkling cocktail. Cheers!