If you like Cary Grant, whiskey, and WWII-era naval intrigue, you’re in luck this week. Father Goose (DVD/Download) is that rare movie that will please every member of the family.  Men, women, young, old- no matter what your situation is, it’s enjoyable to watch Cary Grant be awkward around small children.  Plus, booze in the jungle! LOTS of booze.

One of Cary Grant’s final films, Father Goose is a delightful romantic comedy that showcases the full spectrum of this iconic actor’s charm. As the salty expatriate Walter Eckland (who for some reason thinks that the South Pacific is a good place to retire in the 1940’s), Grant spends the majority of the movie sporting a 5 o’clock shadow and beach bum couture (think captain’s hat, topsiders, wrinkled oxford shirt). After the British navy destroys his boat, he’s forced to live on a remote island to watch for Japanese planes.  But fear not Cinema Sippers- the navy has hidden whiskey bottles all over the island like a fun easter egg hunt. He eventually ends up rescuing a beautiful French schoolmistresses from a nearby island, along with her female pupils. They bicker like they’re in an episode of Moonlighting, then eventually decide that marriage is a good idea. Hey, he’s a man with a boat and a history degree.  She could do worse.

Given the time period and setting of this film, I think a tiki drink is in order.  While most cocktails of this ilk use rum, I’ve just got to sub in whiskey here.  After all, provisions are limited in times of war.  While watching Father Goose, I recommend drinking a Filthy Beast.

Combine all ingredients except the lemon wheel in a shaker filled with ice. Shake until chilled, then strain into a tiki glass filled with crushed ice. Garnish with a lemon wheel. 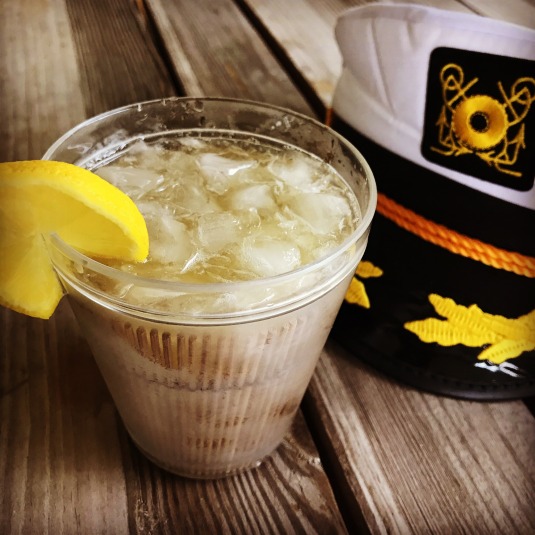 Mr. Eckland and I share a very similar view toward children. They’re annoying, and needy, and anybody in their right mind wouldn’t sign up to have one, but if you happen to be stuck with one (or ten), at least you can put them to work. And by work, I mean bringing you the whiskey bottle. Cheers!