I’m sure I’ve previously mentioned that I adore movies about old Hollywood. The glamour, the scandals- I can’t get enough. This week I’ll be watching Scorsese’s The Aviator (DVD/Download), one of the best films to feature re-imagined classic film stars. Cate Blanchett as Katherine Hepburn; Gwen Stefani as Jean Harlow; Kate Beckinsale as Ava Gardner- the list goes on and on. And yes, there is Leonardo DiCaprio as mogul Howard Hughes, but who are we kidding here- the ladies are the stars of this show.

The Aviator follows Howard Hughes’ career as a movie producer and aviation pioneer, his success overshadowed by a raging case of OCD. Hughes’ money and charm attract a cavalcade of beautiful starlets, but it’s Hepburn who really connects with him. I know, I know, she was meant to be with Spencer Tracy, but a part of me wanted her to end up with Howard Hughes. Cate Blanchett does Hepburn like nobody’s business, completely nailing the WASP-y New England accent and athletic stride. I was less impressed by Kate Beckinsale’s breathy portrayal of Ava Gardner, though of course I loved her costumes! Really though, the best part for me is the fabulous wallpaper in the bathroom of the Beverly Hills Hotel. That iconic giant palm-leaf design is a welcome distraction from DiCaprio’s sweaty overacting mess below it.

The 1930’s must have been an amazing time to be in Hollywood. Not just for the films (though those were good too), but also for the cocktails! Imagine sipping a gin cocktail at the Cocoanut Grove, a drunken Errol Flynn at the next table over, hitting on starlets left and right. Paying tribute to classic drinks and Hughes’ obsession with flying, while watching The Aviator I recommend drinking an Aviation cocktail.

Add all ingredients to a shaker filled with ice, shake until chilled, then strain into a coupe glass. Garnish with a maraschino cherry (optional). 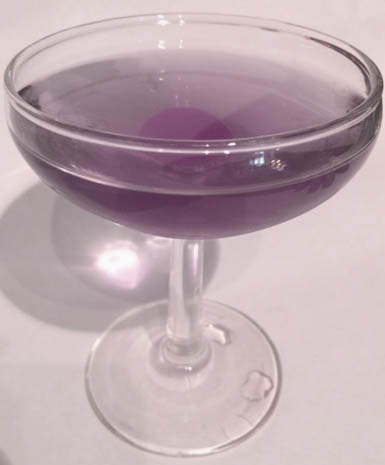 Obviously, The Aviator focuses a great deal on Hughes’ aviation experience (including one harrowing plane crash over Beverly Hills), but it’s also a love letter to cinema. Watching the filming of Hell’s Angels is pure fun, and I love seeing how the coloration and technology of cinema changes over time. In short, come for the glitz and action, but continue watching for the style and history. Cheers!