RSS Feed
← Joe Versus the Volcano
You’ve Got Mail → 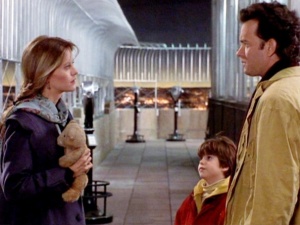 Today, I’m helping my mother celebrate her birthday by providing a cocktail pairing for one of her favorite movies, Sleepless in Seattle. It really doesn’t get much more romantic, or much more 90’s than this movie. What I love about this particular Tom Hanks/Meg Ryan combo is that we get to see the two sides of Tom Hanks- the dramatic (lonely, grieving widower) and the comedic (a single father trying to re-enter the dating scene). After this film, Hanks would begin his string of dramatic roles that would win him his much-deserved Oscars (Philadelphia, Forrest Gump, etc.), so it’s with that in mind that I relish the opportunity to see him debate drinks vs. dinner with his young son, get misty over the end of The Dirty Dozen, and fidget helplessly on a first date. And yet, his speech to “Dr. Marcia” about coping with the loss of his wife, and remembering to “breathe in and out every morning” always makes me a little misty.

Sleepless in Seattle tells the story of Annie (played by Meg Ryan) and Sam (played by Tom Hanks). Sam is recently widowed, and Annie is engaged to be married to dorky, allergic-to-everything Walter (hilariously portrayed by Bill Pullman). She hears Sam telling his story to a call-in radio psychiatrist one night, and is inexplicably drawn to him. She writes a letter, throws it out, her friend sends it anyway, asking Sam to meet her at the top of the Empire State Building on Valentine’s Day. The film borrows heavily from An Affair to Remember, and really it turns into a celebration of all romance movies, so-called “chick flicks”.  Sleepless in Seattle can get a little cheesy at times, but it’s got heart.

Midway through the film, Tom Hanks is schooled in the ways of modern dating by his friend, played by Rob Reiner. He’s told that his future date will want tiramisu. In reference to this, and to Seattle’s booming coffee culture, I’m preparing a coffee-inspired drink.

Mix alcohol ingredients in a cocktail shaker over ice. Swirl chocolate syrup around a martini glass. Pour cocktail into prepped glass, and sprinkle cocoa powder and espresso powder on top.

Sleepless in Seattle is really the comfort food of movies. I know many people will be sitting down to eat their mashed potatoes and stuffing on Thanksgiving (myself included), and I suggest popping in this film after you’ve gorged yourself and need to rest on the couch. Instead of coffee with your pie, pour yourself this tiramisu martini and watch the magic happen. Because if you haven’t figured it out by now, when Tom Hanks and Meg Ryan get together, it is definitely magic. Cheers!