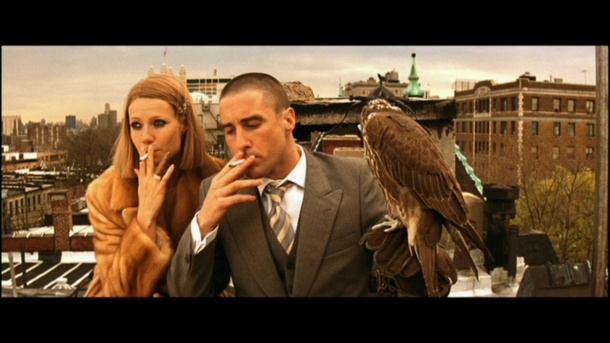 A recent screening of The Grand Budapest Hotel has inspired me this week to revisit my favorite Wes Anderson film, The Royal Tenenbaums (DVD/Download). Of course I love any film by this director who has such a keen eye for style, but my personal favorite is still this 2001 ode to dysfunctional families and Nico. It’s quirky, it’s stylish, and it’s heartfelt (I dare anyone not to feel saddened to their core as Elliott Smith’s ‘Needle in the Hay’ frames a character’s suicide attempt), but it’s also delightfully funny in other moments. With The Royal Tenenbaums, Wes Anderson has created a world that seems so real that I feel like I could just put on a Lacoste polo dress and aviator sunglasses and step right in.

This film tells the story of the wealthy Tenenbaum family and the struggle of the patriarch Royal to bring them back together. Gene Hackman does a phenomenal job of playing the hilarious and conniving Royal, and Anjelica Huston brings an unexpected softness to the part of his estranged wife Etheline. Their three children are played by Gwyneth Paltrow, Luke Wilson, and Ben Stiller, and all three are former child prodigies who have grown up to be adult messes. Anderson regulars Bill Murray and Owen Wilson round out the cast, along with the sadly now-deceased Kumar Pallana (or Pagoda as I’ll always think of him). Of course the sets and costumes are phenomenal, like a 1970’s dollhouse come to life. There are the typical Wes Anderson quirks, like a pet hawk named Mordecai, and Dalmatian mice, and of course the soundtrack is perfect in every way. A mix of The Rolling Stones, Velvet Underground, Paul Simon, and a plucky orchestral score, the music of The Royal Tenenbaums always makes me feel like I’ve just raided the record collection of a very cool relative.

For my cocktail pairing, I wanted to find something that seemed classic yet eccentric, sort of like the characters in this film. I scoured my bar to come up with a list of ingredients that would be off-putting on their own, yet when brought together would make a wonderful union. I call this week’s concoction the Tenenbaum Toast.

Fill a champagne flute or small glass (the more unusual the better!) with crushed ice. Combine first three ingredients in a cocktail shaker with ice, and shake until chilled. Strain into prepared glass and top with club soda and grenadine. Dalmatian straw optional.

The pink color of this drink is meant to match that beautiful “Wes Anderson Pink” (as I like to call it) that covers the walls of the Tenenbaum house, as well as much of The Grand Budapest Hotel. I like to think that Margot Tenenbaum would enjoy one of these in the bathtub with her clandestine vintage cigarettes, as her old television teeters perilously close to the water. So as Wes Anderson is showered with accolades for his latest film, I urge you to take the time to re-discover one of his older works with a strange and wonderful cocktail. If you want to go all out, layer on the eye liner and watch with a bored expression. Cheers!