If you haven’t begun your holiday shopping yet, what in the world are you waiting for?? Smart folks like me start in November, but if you still need a little incentive, I suggest watching this week’s film Miracle on 34th Street (DVD/Download) to put you in the gifting mood.

Recently deceased acting legend Maureen O’Hara stars in this classic holiday film about a Macy’s department store Santa Claus who just might be the real deal. O’Hara plays an unlucky-in-love divorcee raising her daughter (played by a very young Natalie Wood) to be skeptical of all things intangible- including holiday miracles. Then Kris K. comes along (that’s Kringle, not Kardashian), and he seems like more than just a kind-hearted old man. Claiming to be Santa Claus, he attracts psych evaluators and small children alike. I love that this film from the 1940’s features a strong independent woman like O’Hara, her character an event director at the flagship store. Heck, that’s an impressive job even now. And the sappy message of the movie (Santa is real if you believe!) gets a much needed boost by terrific acting performances and sharp dialogue. At times, I feel like I’m watching a classic Howard Hawkes film, instead of one of the most beloved Christmas movies ever made.

One of my favorite scenes involves Kris Kringle showing off his impressive Santa skills while talking to a Dutch girl. He speaks to her in Dutch because, of course, Santa speaks the language of all children. This inspired my cocktail this week, using the Dutch spirit Genever, a stronger, early version of the typical gin we know today. While watching Miracle on 34th Street, I recommend drinking a Sinterklaas.

Combine ingredients in a small saucepan, and heat on the stove until it just barely simmers. Pour into a heat-safe glass or mug, and garnish with a cinnamon stick. 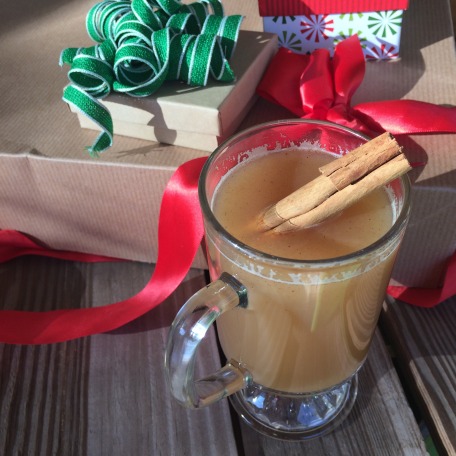 Your current thoughts about Santa Claus are probably dependent on your age (and I doubt I have many 6 year old readers of this blog), but this movie is so great that it makes me want to believe in Santa Claus. At the very least, it makes me long for the days when department stores were classy and sophisticated, instead of overrun with cheap merchandise and bad lighting. Best of luck with your holiday shopping, and if you find yourself in a Macy’s this Christmas, plan on having a cocktail afterwards- you’ll need it. Cheers!