Man, they don’t make ‘em like they used to. I never thought I’d see the day where I long for a movie like Face/Off (DVD/Download), but I’m officially there. Big-name stars making a high octane thriller with an ORIGINAL script, that’s not a sequel to or reboot of something else? Just doesn’t happen too often in mainstream Hollywood these days. Nicolas Cage keeps throwing stuff at the wall to see what sticks, but will there ever be another film that showcases his talent for lunacy (and, I admit, pretty good acting) quite like Face/Off? God I hope so.

This movie might not work so well if it weren’t for the combined performances of John Travolta and Nicholas Cage. As the Joker-like domestic terrorist Castor Troy (remember when terrorists were angry American white males?), Nicholas Cage is batsh*t crazy. Parading around in a priest costume, groping choir girls, waving around his golden guns- this is a part Nicholas Cage was born for. But then, THEN he falls into a coma, and family-man FBI agent John Travolta is compelled to have Cage’s face put on his body to foil a bomb plot. AND THEN- Cage wakes up, sees that he has no face, and puts the iced Travolta face on HIS body. I swear, even the best soap opera scribes couldn’t make this stuff up. Now Travolta is forced to turn up the creepy, and Cage has to act like John Travolta doing a bad Nicolas Cage impression. Mistaken identities and slow-motion shootouts ensue.

One little gem that’s always stayed with me from Face/Off is Caster Troy’s claim that he could eat a “peach” for hours. Damn if that line doesn’t run through my head every summer when peach season hits central Texas. Welcome to my nightmare. While watching Face/Off, I recommend drinking a Peach Shandy.

Build drink in a pint glass, stirring gently to combine. Garnish with a peach slice. 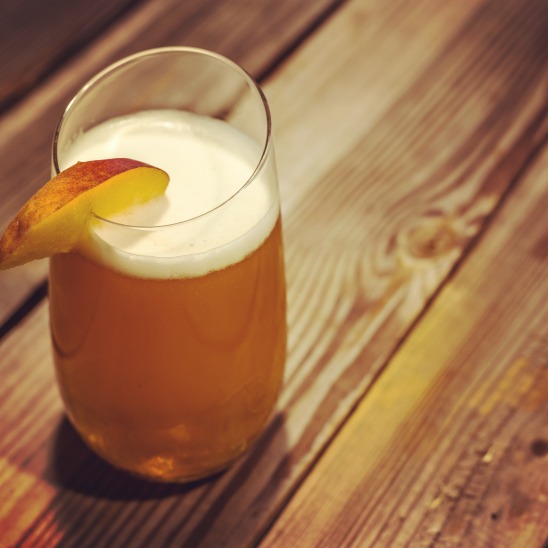 Where Face/Off falls short for me is the flimsy explanation of how the voices and bodies of the two actors could be manipulated so easily to match the new faces. Sucking the skin off of someone’s head and transplanting it seamlessly with no scarring? Yeah, OK. Lasers. But the idea of Nicholas Cage’s consumption-ridden Leaving Las Vegas body suddenly being able to pass as a beefed up Travolta? Now that’s Hollywood magic. Cheers!