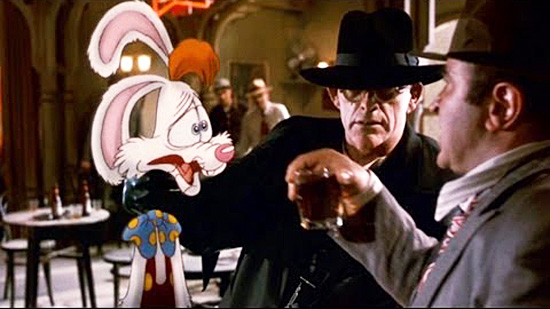 Cartoons have all the fun. At least, that’s the impression I get from this week’s film Who Framed Roger Rabbit (DVD/Download). While the human citizens of Los Angeles are busy drinking themselves to death and designing freeways, their animated neighbors get to play patty cake and dance in a Silly Symphony. Who needs Hollywoodland when you’ve got Toontown?

Who Framed Roger Rabbit ushered in a lot of firsts for me. It was the first time I saw Bugs Bunny and Mickey Mouse in a movie TOGETHER, the first time I learned what “sexy” was supposed to look like (thanks for that impossible bar, Jessica Rabbit), and the first time I had cinema-induced nightmares (again, thanks for that re-inflated, waxy Christopher Lloyd). At 5 years old, my young mind soaked up this picture like a slapstick-starved sponge, delighting in Roger Rabbit and his fellow ‘toons’ antics. As an adult, I gravitate toward gumshoe Eddie Valiant (played by Bob Hoskins), who’s too old for this crap but needs a distraction to keep himself out of the whiskey bottle.   Nevertheless, the kid in me still can’t resist a good “Shave and a Haircut” joke.

If I were an entertainment mogul, the first thing on my agenda would be to build a real life Ink & Paint Club. Seriously- a speakeasy filled with dueling pianos and Betty Boop? Genius. My drink of choice? Something lethal. While watching Who Framed Roger Rabbit, I recommend drinking Dip.

Stir together first three ingredients in a cocktail shaker filled with ice until well chilled. Strain into a martini glass, and garnish with a lemon twist.

Side note: I have been waiting YEARS to feel justified in keeping this ugly martini glass in my house. Roger Rabbit just gave me my excuse.

Who Framed Roger Rabbit is such a love letter to classic Hollywood and the golden age of animation, that I just want to wrap it up in a bear hug until its eyes pop out. The great thing about this movie is that by mixing cartoons and live actors, the fantastic becomes real. Suddenly, you start to believe that you could get ferried around town in a potty-mouthed taxi, or that the bullets in a gun are actually slow-moving dum-dums with the voice of Yosemite Sam. I know it’s not true, but isn’t it fun to pretend, just for a little bit? Cheers!