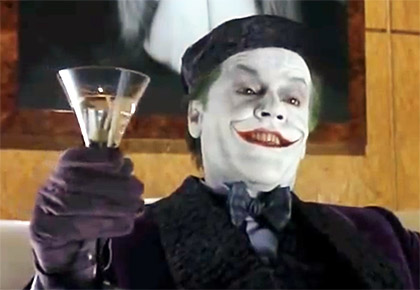 If we’re still looking at gender as being a binary concept, then I guess Cinema Sips has always had a bit of a female bias (yes, yes, I like pink drinks and rom-coms- what a crime). However this month, I’ll be shaking things up by watching movies with “man” in the title.  They may include films I’ve rolled my eyes at, checked my phone during, and thought, God there needs to be more women in this. But maybe with a cocktail, I’ll feel more generous. Kicking things off is the classic superhero film Batman (DVD/Download).

Although my heart actually belongs to Batman Returns (don’t get me started on how much I adore Michelle Pfeiffer’s Catwoman), I think it’s important to go back to where the modern superhero film began. Sure, there were some cheesy caped crusader films and TV shows of the 60’s and 70’s, but Tim Burton’s Batman ushered in a new era of artistry. Suddenly, the audience was seeing dark, mesmerizing cinematography, lavish production design, and genuinely good acting in place of all the onomatopoeias. Michael Keaton brings a level of humanity to an iconic character that has never been matched since, and Jack Nicholson’s manic Joker performance manages to be fun and frightening all at once. And by frightening, I’m referring of course to his purple satin chef’s hat.

Speaking of the Joker, his nefarious plot to poison the citizens of Gotham through make-up and hairstyling products is pretty genius. Funniest scene: news anchors, afraid to use any products, showing up on the air looking like they were just on a 3-day bender. In tribute to the Joker and his crazy style, I recommend drinking a Smilex Surprise.

I’ve always found Batman to be the most fascinating of superheroes because at the end of the day, he’s simply a rich guy with gadgets and extensive martial arts training. He’s a human being who struggles with the same dichotomy that most of us feel from time to time, like we’re one person to the world at large, and someone totally different to ourselves and those close to us.  Michael Keaton really makes you feel this struggle, with nary a nipple in sight.  Many Batmen have come and gone, but if you’re like me, you never forget your first. Cheers!