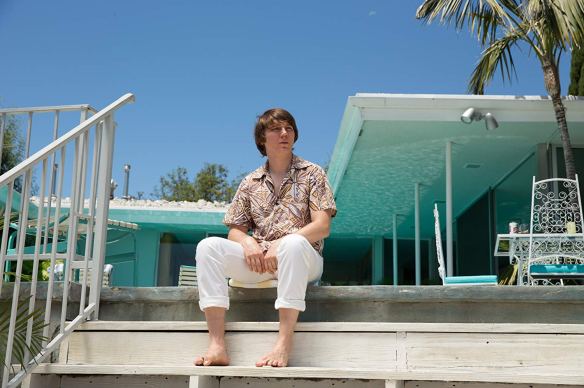 The above photo says it all. I cannot resist 1960’s California modern architecture and will watch literally any movie that features it. Lucky for me, Brian Wilson apparently owned a seriously cool house, straight out of Blake Edward’s The Party. Wilson also wrote some great songs with The Beach Boys, but let’s be clear- I’m here for his swimming pool. Grab your sunblock and antidepressants—we’re watching Love & Mercy (Disc/Download).

As far as music biopics go, this one doesn’t follow the standard formula. Switching back and forth between 1960’s and 1980’s Brian Wilson, the film stars Paul Dano and John Cusack as two versions of the same complicated man. In the heyday of The Beach Boys, he was the mad genius behind so many of their hits, crying out for help in his lyrics, with a family unwilling and/or unable to see that he needed serious medical attention. By the time the 1980’s hit, he’d lost a brother, spent a decade in bed, and hooked up with crooked doctor Eugene Landy (played by a villainous Paul Giamatti). Shuffling through life like a sad, lonely child, he’s trapped in a haze of pharmaceuticals until he meets Cadillac saleswoman Melinda Ledbetter (played by Elizabeth Banks), who helps him find a way out from under Landy’s control. While Paul Dano gets the splashier role of young Brian, mixing it up in the studio and harmonizing over Pet Sounds, John Cusack’s performance is so quiet and lovely you almost miss it. The romance he shares with Melinda makes you feel like this is what he’d been singing about all that time– he just didn’t know it yet. God only knows what he’d be without her.

Although I love the ‘60s aesthetic in half of the movie, I also adore Elizabeth Banks going full-on ‘80s with her hot-rolled hair and pastel sweaters. If this lady were a cocktail, she would be something light, refreshing, and sweet. She would be a Sea Breeze.

Combine vodka, cranberry, and grapefruit juices in a shaker with ice.  Shake until well mixed, then dump entire contents of shaker into a glass. Garnish with a lime wedge.

The real Brian Wilson is still touring the country, packing venues full of middle-aged men in Hawaiian shirts and one very nostalgic Liz Locke. And good for him! Between this film, his records, and those concerts, I’m left with nothing but Good Vibrations, and a Smile. Cheers!