RSS Feed
← Back to the Future
Victor/Victoria → 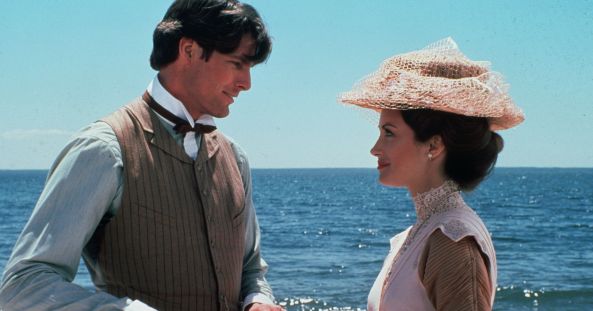 Of all the movies I was supposed to see at TCMFF2020, I was most excited for Somewhere in Time (Disc/Download). An underappreciated romance starring Christopher Reeve and Jane Seymour, it can best be described as Outlander-meets-Anne of Green Gables, with a dash of Moulin Rouge. Set in Mackinac Island’s Grand Hotel, watching this makes me feel like I just took a trip somewhere fabulous without having to leave my living room.

More often than not, cinema time travel happens through some sort of gadget or external magic. But in Somewhere in Time, time travel is a mental state. Christopher Reeve’s character Richard Collier hypnotizes himself into believing he’s going from 1980 back to 1912. Why does he do this? Because he knows he’s been there before. When he sees a picture of a radiant Jane Seymour’s Elise McKenna, he can’t shake the feeling that this once-famous actress was someone special to him. Then he realizes she’s the same old woman who gave him a pocket watch in 1972; a watch that he would give back to her in 1912. This sets off a chicken-and-egg paradox in my mind of who actually had the watch first, for it can’t exist in the past without first existing in the present (and round and round we go). In many ways it’s a reflection of their love, traveling through time, unchanged and constant.

As mentioned, the Grand Hotel of Mackinac Island plays a central role. Because the island allows no motor vehicles even to this day, it’s the perfect location to set a story from the past. I can almost imagine myself in a wicker chair on the hotel’s wide veranda; sipping cocktails and watching the horse-drawn carriages go by. Hypnotize yourself into thinking you’re relaxing at a luxury hotel with this Grand Tonic. (hey, it’s worth a shot!)

Fill a glass with ice, and pour in a shot of Grand Marnier. Top with tonic syrup and club soda, and stir gently to combine. Garnish with orange and strawberry slices. 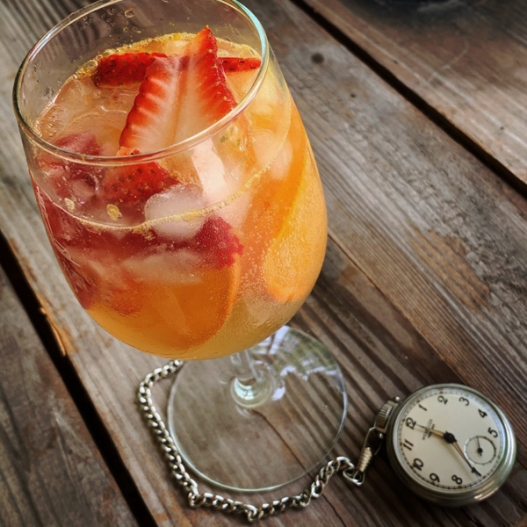 Christopher Reeve plays a dashing hero who puts himself through hell to reach the love of his life, and it makes me a little sad that he didn’t have the chance for a lengthy career of roles like this. Knowing what we do now about his tragic injury, it makes Somewhere in Time feel even more urgent. Richard, and Christopher, are both running out of time. It’s up to us movie fans to give them more of it. Cheers!