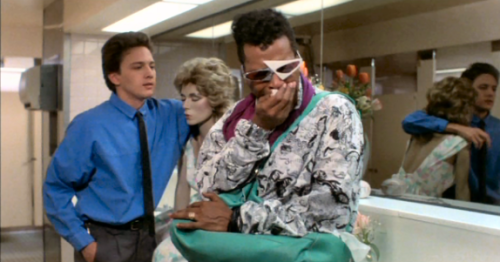 How I’ve gone over a year on Cinema Sips without discussing one of the best things to come out of the 1980’s, I have NO IDEA. Sure, Roger Ebert declared this week’s film Mannequin (DVD) “dead” and full of clichés, but clearly he didn’t understand the brilliance that is Hollywood (the gay black window dresser, not the place). I was so excited to see the title song from this movie, ‘Nothing’s Gonna Stop Us Now’ referenced in the surprisingly good film The Skeleton Twins recently, and it just reinforced my opinion that this gem deserves a comeback.

Mannequin stars Andrew McCarthy as starving artist Jonathan Switcher, who creates a mannequin at one of his short-lived jobs, only to see it come to life later on in the form of Emmy, played by a young Kim Cattrall. However, he’s the only one who can see her in human form, and there are some unintentionally funny scenes of Andrew McCarthy riding a motorcycle around Philadelphia with a mannequin draped around him. The supporting cast makes this even better, with Golden Girl Estelle Getty as the owner of Prince & Company department store (where the mannequin resides), and a nearly unrecognizable James Spader as the creepy manager. It’s been years since I’ve set foot in a department store, but as a child I totally wanted to spend the night in one- raiding the make-up counter, trying on whatever I wanted, and falling asleep in the bedding department. As an adult, this dream has been amended to include relaxing in a fur-lined hammock with Andrew McCarthy and discussing cellulite with Hollywood.

Throughout the film, Jonathan and Emmy enjoy role-playing in the store’s various vignettes. Ooh they’re punk rockers! Now a mob boss and his wife! Now tennis fans! Now just naked under their fur coats! My favorite look is the cruise-wear. To that end, I’ll be making a tropical rum drink that’s totally appropriate for sipping on a fake cruise ship, with a fake sky, while Andrew McCarthy rubs Coppertone on your back, even though there is no sunshine. While watching Mannequin, I recommend drinking a Man Overboard.

Muddle mint leaves and lime juice in the bottom of a glass. Add rum and crushed ice. Top with club soda.  Stir gently to mix. Add a sprig of mint and lime slice to garnish.

It’s refreshing to see Kim Cattrell before Sex and the City turned her into an oversexed caricature, and she does the best she can in a pretty ridiculous role. I love the flashy 80’s sets, the shoulder pads, and Hollywood’s amazing sunglasses (which Kanye West totally stole). Come prepared with a sense of humor and a strong cocktail when you watch this, and you can’t go wrong. Cheers!

While the nation enters its second week of 50 Shades of Grey fever, I’m revisiting a movie similar in theme, though far better in execution. Secretary (DVD/Download) has been mentioned in a lot of articles recently, and while I can’t exactly call 50 Shades great cinema, I’m glad that this sub-par movie has brought a really great one back into the spotlight.

After seeing both films, the similarities are striking. Both feature male lead characters with the last name of Grey, and both are essentially about a shy, average girl discovering her true self after meeting a man who introduces her to some pretty kinky sex. The difference between the two films is that while 50 Shades of Grey takes itself SO SERIOUSLY, Secretary is more of a dark comedy. Yes, the sex scenes can be graphic and serious in tone, but the supporting elements are quite funny (Maggie Gyllenhaal on all fours with a saddle and a carrot in her mouth spring to mind). James Spader plays lawyer E. Edward Grey, an oddball employer who has a penchant for S&M in the office, and Maggie Gyllenhaal plays his new secretary Lee Holloway. What I love (and found so romantic that I actually saw this film twice in the theater when it was released) is the way these two damaged people formed an unusual but powerful bond. Mr. Grey understands Lee in a way that nobody else does, and vice versa. He saves her from a life of boredom and mediocrity, and she in return gives him the love he never knew he needed.

My drink this week is an homage to Lee Holloway, who is maybe the hardest working secretary on the planet.  Who else would dive into a dumpster in search of a lost file, coming out covered in dirt and old coffee grounds?  Ms. Holloway, that’s who. While watching Secretary, I recommend drinking a Dirty Martini.

½ oz olive brine (from the jar of olives)

Shake liquid ingredients together in a cocktail shaker filled with ice until chilled. Strain into a martini glass and garnish with an olive. 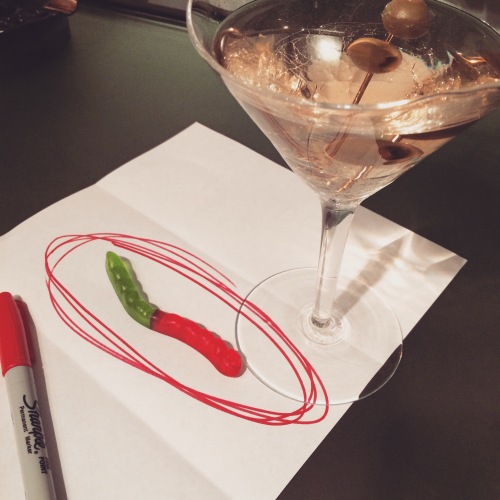 I love that Secretary started a career renaissance for James Spader, and just plain started a career in Maggie Gyllenhaal’s case. It’s such a quirky, odd movie, and I can’t explain why I love it so much, but I do. Sometimes movies are like that. Maybe I just like the idea of someone telling me that I can eat 4 peas and then as much ice cream as I want. Or perhaps I like a man with a keen eye for grammar and spelling mistakes. That must be it. Cheers!

This May on Cinema Sips, I’m excited to highlight a few of my favorite high school movies. I figured, what better time to do so, what with prom season coming up, graduation, etc. As we all know, the reigning king of high school movies is of course John Hughes. It’s difficult to pick my favorite among his 80’s teen classics, but if pressed, I have to choose Pretty in Pink (DVD/Download). It’s the perfect blend of romance, social commentary, humor, and New Wave music, and I never get tired of watching it.

Pretty in Pink is the story of Andie (played by Molly Ringwald), the creative, pretty girl from the wrong side of the tracks, who falls for rich, sweet, and spineless Blane (played by Andrew McCarthy). Duckie (played by Jon Cryer, in a fantastic role that thankfully makes me forget about ‘Two and a Half Men’) is Andie’s best friend, who is also in love with her. Rounding out the cast are the brilliant Harry Dean Stanton as Andie’s kinda pathetic but well-meaning father, and Annie Potts as the hilarious and hip owner of the record store where Andie works. James Spader also has a great role as preppy sleaze Steff (seriously- Blane? Steff? What country club directory did Hughes consult for these names??), and his feathered hair is truly a masterpiece. Of course, anybody that’s seen this movie also knows that it features maybe the ugliest prom dress in the history of prom dresses. What makes it particularly bad is that all the characters say how beautiful and stunning Molly Ringwald looks in it. Are they blind? Drunk? We’ll never know. Yes, it was the 80’s, but still, there is no excuse for someone making this dress happen.

My cocktail tonight is obviously pink, and obviously kinda girly. I’m using gin as the base because Steff and Blane seem like the kind of guys to get loaded on gin & tonics at the country club pool. It’s also a bit on the sweet side, just like Duckie. Generations of women have argued over whether Andie should have chosen Blane or Duckie in the end, so I’m happy to feature a cocktail that celebrates both of them. I stumbled upon a great recipe on The Kitchn blog last week, and with a little tweaking, I’m serving up a Cats Club Cocktail.

Combine the gin, lemon juice, raspberry syrup, and egg white in a cocktail shaker without ice. Shake vigorously for 10-20 seconds. Then add ice, and continue shaking for another 10-20 seconds. Strain into a coupe glass and garnish with raspberries.

Recipe Note: To make raspberry syrup, heat ½ cup sugar, ¼ cup water, and ¼ cup fresh raspberries on the stove until the berries break down and the mixture thickens (about 5 minutes). Strain out the solids and chill before using. 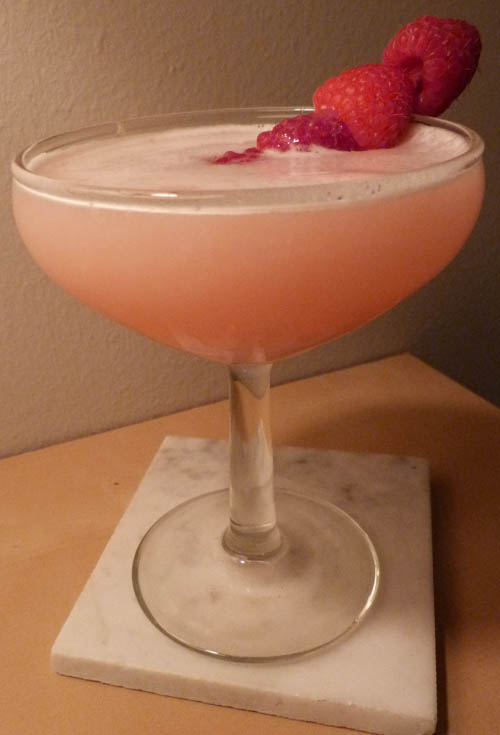 Full disclosure- I never actually went to my prom in high school. Frankly, I’d seen so many proms in movies that I knew the real thing would never measure up. Without a cute guy in a bolo tie and alligator shoes calling me stunning, what’s the point? I’d much rather experience high school vicariously through Molly Ringwald, as I’m sure many girls out there would. So what if most of her classmates appear to be in their early 30’s? That just means they have no problem getting carded at the liquor store. While I have zero desire to relive my high school days, I always look forward to watching Pretty in Pink. And I always look forward to drinking while I do so- beer, scotch, juice box, cocktail, whatever. Cheers!