If you’re like me, the pandemic years really messed with your sleep. Watching the film Insomnia (Disc / Download), I can relate to Al Pacino with his glassy stares and confused expressions because they’re mine. What day is it? Did I wash the conditioner out of my hair? Did I leave too many loose ends hanging on a crime I committed while delirious from lack of rest? Things I ask myself on a daily basis now.

A tight psychological thriller directed by Christopher Nolan, Insomnia stars Al Pacino as Will Dormer, a hot shot LA detective sent to Alaska to work a teenage girl’s homicide case. He’s got his own internal affairs investigation percolating back in California, but for now, he’s focused on the task at hand: find the murderer. Things get muddled when he accidentally shoots his partner, and the only witness is the killer he’s searching for. Thus begins a cat and mouse game of trying to nail the bad guy while still protecting his own secrets. Robin Williams turns in an elegant, terrifying performance as pulp novelist Walter Finch, whose real-life crimes are even more twisted than those in his books, and seeing Pacino and Williams together is akin to watching Michelangelo and DaVinci working side-by-side. Hilary Swank does her best to not get lost in their shadows, playing a local detective trying to solve crimes while magnanimously shaking off Dormer’s misogynist language. Her name isn’t “honey”—it’s Detective Burr. Learn it, Dormer.

Although there are a lot of tense scenes in this film, one of the best is set in a remote Alaskan fishing cabin shrouded in fog. As police officers chase the murderer through soupy air, visibility is about as low as the chances of making it out there alive. While watching Insomnia, I recommend drinking a Fog Cutter cocktail.

Combine orange juice, lemon juice, orgeat, rum, gin, and brandy in a shaker with ice. Shake until chilled, then strain into a tiki mug filled with ice. Float sherry on top, and garnish with a citrus wheel and/or mint.

Part of Dormer’s problem throughout this movie is that the summer sun never sets on this northern town. He can try to block the light out in his motel room as best he can, but like truth, it always manages to seep in. Thus when sleep comes, and it does finally come, it’s a hard won relief. Cheers!

If nothing else, the horror-show that is 2020 has proven once and for all that teachers are goddamn heroes. Often putting their lives and personal sanity at risk, they’ve had to work three times as hard this year to ensure that kids are not only educated, but comforted during these unprecedented, uncertain times. Even when faced with a laptop screen full of tiny faces, it’s up to them to make every child feel safe, and above all, seen. No movie has communicated the truth of this better than Dead Poet’s Society (Disc/Download).

A perfect pick for Fall viewing, Peter Weir’s film opens on a bucolic New England boarding school just as the leaves are starting to change. The boys who inhabit these drafty buildings want so badly to be men, and it isn’t until they meet their new English professor Mr. Keating (Robin Williams) that they start to learn what that truly means. You see, Mr. Keating doesn’t just teach them poetry. He teaches them to be brave, to inhabit the world with honor, and that feelings and emotions matter. To me, this shows what an important role a great teacher can play in one’s life. At the end of it all, you might not remember what a quadratic equation is, or who wrote the words, “O Captain! My Captain!” but you’re damn sure going to remember the person who encouraged you to be curious about the world, and fearless in the face of adversity.

Because this movie gives me all the cozy New England vibes, I’ll be drinking a nice, warming apple brandy cocktail, perfect for poetry readings in caves. While watching Dead Poet’s Society, I recommend drinking this Captain’s Mule.

Place first three ingredients in a shaker with ice. Shake until chilled, then strain into a copper mug filled with fresh ice. Top with ginger beer, and garnish with dried apple.

There have been a lot of great teachers in cinema, but out of all of them, John Keating is the one I most wish I’d had the pleasure of knowing. Someone to tell me that words are important, and to not be so afraid that my thoughts are worthless or embarrassing. If Cinema Sips is my barbaric YAWP!, then let it be heard. Cheers! 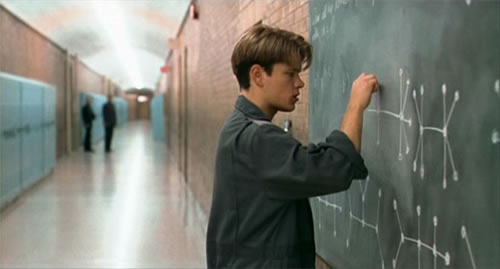 It FINALLY feels like fall outside, and I’m surrounded by apple spice/pumpkin spice everything. This time of year always makes me nostalgic for crunchy leaves underfoot and college co-eds in sweaters. I can think of no better movie to watch in autumn than Good Will Hunting (DVD/Download). So curl up with a plaid blanket, fix a drink, and prepare to be lulled in by a soothing Danny Elfman score and the timid songs of Elliott Smith. I feel like skipping class all over again!

Good Will Hunting will always be known as the film that made Matt Damon and Ben Affleck famous, as BFFs, actors, and screenwriters. It’s the Hollywood story everyone loves to hear- two childhood best friends write a script, Robin Williams decides he wants to be in it, Harvey Weinstein decides he wants to produce it, the film is made, released, it’s a big success, and the two best friends bask in Oscar glory. Of course, there’s probably a lot more to the story than that, but that PR-approved legend is just as heartwarming as the movie itself. I know this film about a young mathematical prodigy overcoming childhood trauma to find love gets criticized for being too saccharine at times (It’s Not Your Fault) but no one can deny the brilliant performance by Robin Williams as a down-to-earth psychologist, the charming Southie accents of Matt Damon and his crew of friends, or the perfect, weepy Elliott Smith soundtrack. It still kills me that “Miss Misery” lost out on the Oscar to Celine Dion and “My Heart Will Go On”. I demand a recount.

One of the best, and most oft-quoted lines of the film is when Matt Damon’s Will Hunting announces he got the number of a girl in a bar and, well, “how do you like them apples?” I’ve recently fallen in love with Argus Cidery’s Ciderkin hard apple cider, and I’ve been dying to use it in a cocktail. So while watching Good Will Hunting, I suggest drinking Them Apples. 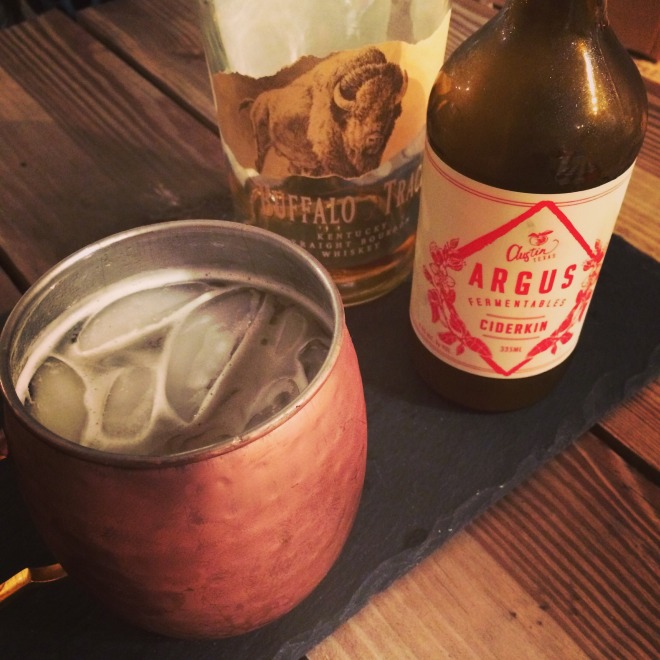 It’s still fun to watch this movie and see how incredibly young Matt Damon and Ben Affleck look. They’re major blockbuster stars now (in fact I just caught Matt Damon in the stellar film The Martian over the weekend), but back then they were just a couple of kids with some Kevin Smith film credits. And of course, my heart aches for all the Robin Williams performances we’ll never get to see in the future. This one is just so damn good. So bundle up, settle in, and if you need me- sorry guys, I gotta go see about a drink. Cheers! 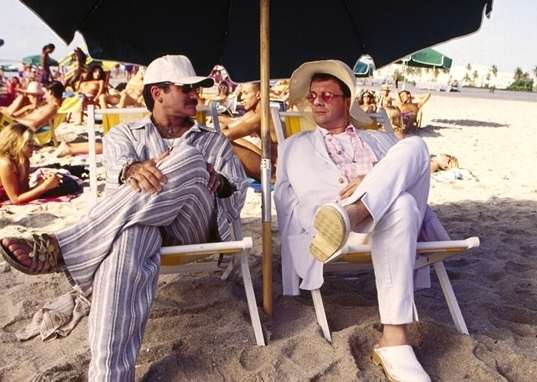 As we all know, last week the world lost one of the great comedic icons of cinema, Robin Williams. Some took the loss harder than others, but personally I was saddened to think that I wouldn’t get a chance to see what sort of role he would take on next. As an actor, he always had a way of surprising me. Just when I thought he was the zany, manic comedian whose brain worked just a bit faster than anyone else’s, he would throw a curveball in the form of a great drama like Insomnia and completely change the way I viewed him. When I heard the news last Monday, my neighbor mentioned having just watched him in The Birdcage (DVD/Download). Hearing that, a lightbulb went on over my head. YES! This was the way I would celebrate him, by watching Robin Williams in one of his greatest roles, yucking it up with Nathan Lane, while being equally heartbreaking as a man trying to defend his sexuality. Plus, with the buzzy Miami setting, this movie just screams for a cocktail pairing.

The Birdcage stars Robin Williams and Nathan Lane as two lovers who run a Miami drag nightclub. Nathan Lane is the star of their revue, and Robin Williams is the director. They have also raised Robin William’s son together, and now said son is coming home as an adult with the announcement that he’s engaged. Unfortunately the girl he’s engaged to is the daughter of a staunch republican senator. Soon, the conservative family comes down to Miami to meet the future in-laws, and Williams and Lane have to pretend to be a married couple, with Nathan Lane in drag. The cast in this film is stellar, with Gene Hackman and Dianne Wiest playing the senator and his wife, respectively, and Hank Azaria steals just about every scene he’s in as the flamboyant houseboy “Agador Spartacus”. Williams and Lane are so brilliant together that I find myself wanting them to actually be a married couple in real life. They spar, they bicker, but they love each other deeply. Anybody questioning marriage equality need look no further than these two characters to see why it’s worth the fight.

Fans of the Cinema Sips Facebook page already know what my cocktail pairing is, but I am now sharing the actual recipe. For The Birdcage, I wanted to find a drink that was appropriate for the tropical Miami climate, but also sweet and strong like Robin Williams’ character. Immediately, I thought of the Hemingway Daiquiri I recently enjoyed at a local bar. It was cool and refreshing on a hot day, and not sticky like many bastardized versions of the daiquiri often are. I inwardly cringe when I see a frozen daiquiri on a menu (mainly because I know in that instance I’m probably sitting at a TGI Friday’s, and how on earth did that happen?!).  So please, do me a favor, and serve your daiquiri’s shaken, not blended or frozen, the way God and drunk writers intended.

Add all liquid ingredients to a cocktail shaker filled with ice. Shake vigorously, and strain into a chilled coupe glass.

This is called the Hemingway Daiquiri because Ernest Hemingway is rumored to have drunk quite a lot of these in his day, starting at the El Floridita bar in Havana. I think it’s fitting for The Birdcage because I can almost picture Robin Williams mixing one of these up for his enchanting Starina, which she will drink pinky-up of course. I urge you to watch this movie, and try not to be sad that Robin Williams is no longer with us. Instead, think about how lucky we are that great films like this one will live on forever. He will always be funny, he will always be a bit heartbreaking, and he will always make me smile. Cheers!