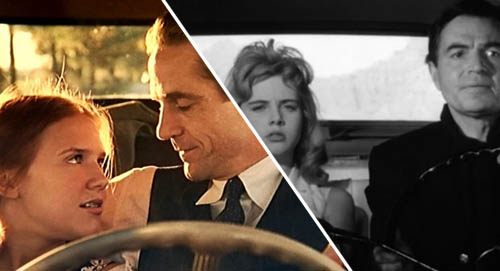 Although it probably won’t ever make the required reading lists of any high school, I’m going to go out on a limb and say that Lolita by Vladimir Nabokov is one of the best books ever written. There, I said it. It was my favorite book as an adolescent, still my favorite in my 20’s, and even upon a recent re-reading, it remains a superb example of English prose. The sexual deviancy of the narrator (a man who preys upon teenage girls) would probably turn many people off, but they’d be missing the gorgeous linguistic skills of the author. “She was Lo, plain Lo, in the morning, standing four feet ten in one sock. She was Lola in slacks. She was Dolly at school. She was Dolores on the dotted line. But in my arms she was always Lolita.” Sentences like this are what have kept me championing this book for decades, and what keep me going as a writer. I’ll never be Nabokov, but one should always have a distant level of genius to aspire toward.

This book is so great in fact, that it took two film adaptations to really tell the story. Most people know of Stanley Kubrick’s 1962 Lolita (DVD/Download) with James Mason as the sophisticated, depraved Humbert Humbert, and I’m certainly a fan. I think it’s beautifully shot, with symbolic close-ups standing in for more gruesome scenes (I’m thinking particularly of the final showdown with Quilty) but it isn’t exactly an accurate adaptation of the book. It’s playful and light, almost a comedy. It captures the spirit of America that I think Nabokov was striving for, but it leaves out most of the emotion and depravity of the book. In contrast, Adrian Lyne’s 1997 version of Lolita (DVD/Download), was a very accurate adaptation plot-wise, nearly to the point of being too much to handle. I’m thinking again of the final showdown with Quilty, which in this version becomes a bloody, gory, gruesome mess- think Tarantino without the humor. However, Jeremy Irons is AMAZING as Humbert. Unfortunately I don’t think either Sue Lyons or Dominique Swain were altogether fantastic as Lolita, but both versions have wonderful Quilty’s, played by Peter Sellers and Frank Langella, respectively.

Whichever version of Lolita you prefer (and I really do suggest watching them both), I recommend harkening back to the novel for cocktail inspiration.  Humbert mentions his preferred drink, the Pin (pineapple juice and gin), so I’ll be enjoying that combination, with an added flirtation of champagne. While watching Lolita, I recommend drinking a Nymphette.

Rim a coupe glass with lemon sugar.  Combine Gin and Pineapple Juice over ice in a shaker.  Shake until chilled, then strain into prepared glass.  Top with Champagne.

You may notice in the above photo that I’ve got a copy of the Lolita audio book as read by Jeremy Irons.  If you’ve never heard it, go find it today (don’t worry if you already threw out your Walkman- it’s available on Audible or CD too).  That velvet voice is a perfect complement to Nabokov’s words, and I find myself getting lost in the beautifully crafted sentences. As poor, tortured Humbert Humbert admits, “You can always count on a murderer for a fancy prose style.” Cheers!