RSS Feed
← Best in Show
Joe Versus the Volcano → 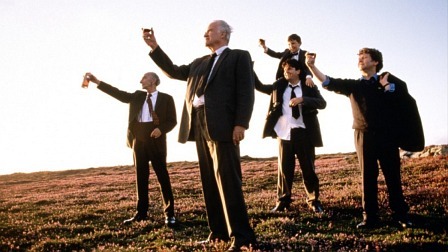 This week, I’m pleased to respond to Cinema Sips’ first reader film request. This one comes from my dad, so in celebration of his birthday today, I’m screening an old favorite of his, Waking Ned Devine. This is one of those little Irish/UK films that miraculously made it across the pond into US theaters and video stores back in the late 90’s. My dad and I both enjoyed this tremendously when it came out, him for the copious amounts of Jameson and beautiful rolling scenery of Ireland, and me for the charming accents and the scene of a skinny naked old man riding a motorcycle. It’s a quirky little movie, but very enjoyable. Particularly if you’re having a cocktail or two while you watch it.

The plot of Waking Ned Devine is slightly similar to the low-brow (but total guilty pleasure of mine) Weekend at Bernie’s. Essentially, the townspeople of a tiny village in Ireland have to make it seem as if the title character (Ned Devine) is still alive, so that they can collect his lottery winnings. It was perhaps the shock of winning the lottery that killed Ned in the first place, but the village decides that he would have wanted to share his fortune. Hilarity ensues when the village tries to fool the representative from the Lottery Commission, and while the film stops short of dressing up and toting around a cadaver (oh Bernie, how I miss you!), they do go to some pretty great lengths to pull it off.

Because the townspeople spend a lot of time in the local pub scheming, this film works well with a cocktail pairing. Of course, if you want to be authentic about it, just pour yourself a glass of Jameson Irish Whiskey and be done. However, I’ve always been a little more partial to that other great Irish alcohol export- Guinness. This week, I’m making a traditional Black Velvet cocktail:

Fill a flute halfway with the champagne. Turn a spoon upside down over the top of the glass, and pour the beer slowly over it so that the liquid runs gently down the sides of the spoon. The Guinness will initially layer nicely over the champagne, but as you sip the two will mix and turn the contents of the glass a golden amber color.

It definitely takes some practice to get this cocktail looking the way you want it to, but it’s not a terrible thing to have to drink your mistakes. I always feel transported to Ireland when I drink Guinness and watch this film. The scenery is beautiful, the people are, shall we say, different (it’s really saying something when the most attractive guy in the film is named Pig), and the laughter is genuine. This movie proves that if you have good friends, you don’t need to win the lottery to be rich in life. But the money doesn’t hurt. Cheers!