In 1960’s-era Beverly Hills, the hairdresser was king. Back then, women didn’t have all the handheld home gadgets we have today. No straightening irons, fancy ionic hairdryers, or texturizing sprays. It was aquanet and curlers, and if you were really brave, an actual clothes iron. So of course, any heterosexual man who could make a woman’s hair look like a million bucks would have been the natural recipient of a casual sex buffet. In Shampoo (DVD/Download), that man was Warren Beatty. Outside of Shampoo, that man was still Warren Beatty.

I like to think of this Hal Ashby-directed gem as American Graffiti meets Dazed and Confused meets the French New Wave. The story unfolds slowly, letting the audience experience a typical day in the crazy life of a popular, promiscuous hairstylist. Warren Beatty’s character George doesn’t end the film much further than where he started, but our own perception has shifted. His metamorphosis from sexy cad to sad hustler occurs once  Julie Christie and Goldie Hawn show him the consequences of his actions, and it’s worth watching just for their performances alone. This film isn’t for everyone, but I’ve always been a fan of slice-of-life stories. And wow, there’s a lot of life in this slice.

All you regular Cinema Sips readers know I love a good party scene, and Shampoo does not disappoint. There’s a celebratory dinner for Republicans (picture stuffed shirts glad-handing each other over Nixon’s presidential victory), and then there’s a wild, acid-fueled counterculture party at a Hollywood mansion. While I’d probably rather be with the hippies, I can’t deny that Republicans know how to make a lethal cocktail. Goldie tries to order a Stinger, which prompted me to ask, what’s a Stinger? Apparently, a drink that died out in the 1970’s. Let’s celebrate 1968 with this slow sipper. It certainly makes me feel like I’m drinking in another era.

Pour Cognac and Crème de Menthe in a cocktail shaker with ice, and stir to combine. Pour entire contents of shaker into a rocks glass. 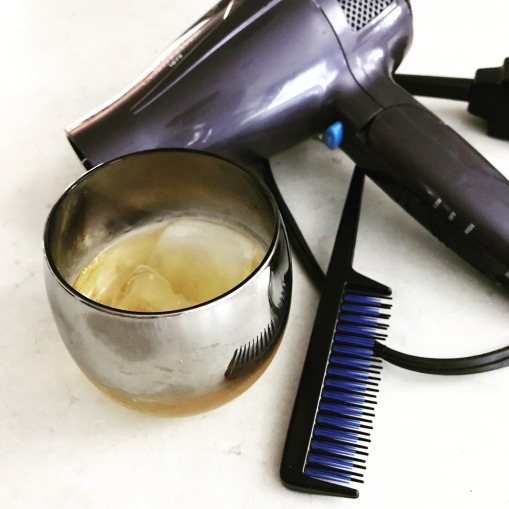 What I find fascinating about this movie is that it was made just after Nixon’s resignation, yet takes place on the night he was elected president in 1968. Such a short number of years in between, but what a difference those years make both in hair, and in politics. I wonder, will we be seeing movies set on 11/8/16 at some point? If the answer’s yes, I’d just like to say: I was a shell-shocked mess, but I think my hair looked pretty good. Cheers!

*Ironically, Beatty’s character has THE WORST haircut I’ve seen on a man. Where do the sideburns begin and end? Where are his ears? I have no idea!!!!! 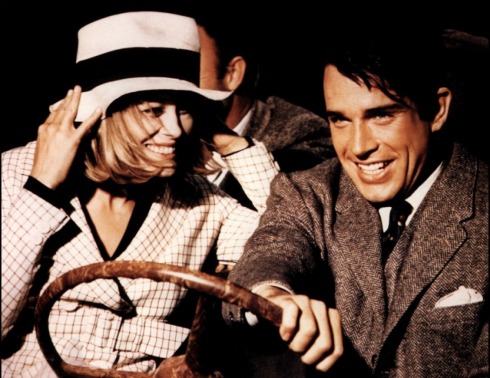 Throughout February Cinema Sips will be featuring some of the great couples of movie history.  To kick things off I’ll be starting with a classic.  Though they often ran afoul of the law and experienced a bloody ending to their love story, the legend of Bonnie and Clyde (DVD/Download) is one that will live in infamy. I’m going to pretend that the Hilary Duff remake of this film never happened (*shudder*) and instead concentrate on the Warren Beatty/Faye Dunaway masterpiece.

Directed by Arthur Penn, Bonnie and Clyde shares a similar gritty look to his earlier collaboration with Beatty, Splendor in the Grass. The actor is fantastic in both, and as Clyde Barrow he’s equal parts seductive charmer, wholesome Southern boy, and deadly criminal. Faye Dunaway as Bonnie Parker totally rocks a beret, and she’s a perfect counterpart to Beatty. They may rob banks, but with these two doing it, robbing banks never looked so good.

Because Bonnie and Clyde viewed the laws of our country as mere suggestions, I’m making a classic and appropriately-named cocktail. While watching Bonnie and Clyde, I recommend drinking a Scofflaw.

Combine ingredients in a cocktail shaker filled with ice. Shake vigorously until chilled. Strain into a coupe glass.

This film will always be remembered for the violent ending, but it’s also a gorgeous study of the dusty, Depression-era mid-west landscape. Bonnie and Clyde’s band of outlaws are mostly good people who happen to do very bad things, and perhaps that’s why the story is so riveting even today. Even though I know it’s impossible, I still root for Bonnie and Clyde to ride off into the sunset together. And of course, Bonnie would wear a fabulous hat. Cheers!

Splendor in the Grass

I’m switching gears a bit on my high school movie binge this May to revisit a classic high school film, and by classic I mean pre-John Hughes. Splendor in the Grass (DVD/Download) was released in 1961 and stars Natalie Wood and Warren Beatty (in his first feature film role) as two star-crossed Kansas teenage lovers. Though I’m of course a big fan of classic cinema, this film has always felt timeless to me. It captures teen angst in such a pure way- ie. that feeling of every little problem being a life or death situation, the intensity of emotions, and inability to wait for the future to happen. On the surface it’s a high school movie about “going all the way”, but really it’s about the passion of youth and the remembrance of things past.

Splendor in the Grass tells the tale of Bud Stamper and Deanie Loomis, two teenagers in rural Kansas. He’s a rich boy who wants to shirk the family oil business in favor of becoming a farmer, and she’s the daughter of a humble shopkeeper. When the movie begins, it’s clear that Bud and Deanie are the most popular couple in school, and genuinely in love. However, soon teenage lust rears its ugly head, and Bud can’t reconcile his passionate yearnings with the “good girl” on his arm. There is a betrayal, and Deanie is driven mad with grief. The film is set against the background of the Roaring ‘20s, and it’s fun to see Bud’s flapper sister come to town to shake up the family. Deanie’s clueless mother also deserves special mention, since her cure-all for mental illness seems to be a big plate of mystery meat and gravy.  As the Fresh Prince so wisely said, “Parents just don’t understand.”  The beautiful Natalie Wood does an amazing job of becoming unhinged, and it’s easy to see why Warren Beatty was a heartthrob in his day- Yowza! Sorry, but he puts pretty much any teen idol of recent years to shame.

My drink this week is inspired by the Wordsworth poem that is recited during the film- “Though nothing can bring back the hour of splendor in the grass, glory in the flower, we will grieve not; rather find strength in what remains behind.”  This drink references floral notes and farm life in Kansas, and I’m using a limited edition gin from Hendrick’s, Midsummer Solstice. When watching Splendor in the Grass, I recommend drinking a glass of Mabel’s Merriment.

I think everyone can relate to the feeling that what is happening in high school is so tragically important at the time, and this film shows the bonds formed during that period are never really forgotten. Perhaps this is why I love high school movies so much, for they are the films I watched over and over again as a teenager, as I was just beginning to shape my identity. In many ways I feel a closer bond with the characters in these films than I do to my actual classmates from that time. Watching this movie again (still on the VHS tape I bought in high school!) certainly makes me feel like I attended a reunion of sorts. It’s no secret I hated high school, but I absolutely loved that time in my life when I was discovering cinema, and watching anything and everything I could get my hands on. I miss those days, when every script and style and actor was new to me, but I will grieve not- rather find strength in the great films that remain behind. Cheers!