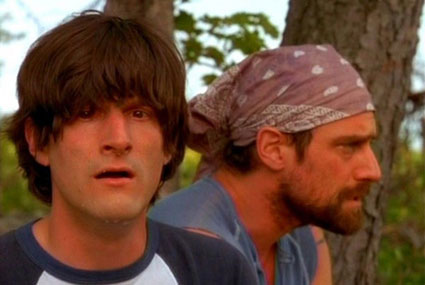 How do I get through summer in Texas? Day b’day, people. One thing that helps is watching a hilarious movie about summer camp, and no I don’t mean The Parent Trap (although I do LOVE Hayley Mills). This week on Cinema Sips, I’m featuring the cult classic Wet Hot American Summer (DVD/Download). Spoofing raunchy 80’s movies like Meatballs and Porky’s, this film is so unabashedly silly that you can’t help but laugh at the bad one-liners, the poor production value, and the plot points that make absolutely no sense. I was lucky enough to see this in a movie theater when it was briefly released in 2001, and I remember wondering why the entire world was not as obsessed with this film as I was. It was the funniest thing I’d seen in years. Well, the world has caught up, and WHAS fever has swept the country, even spawning an upcoming Netflix prequel series. Will all of the original actors make it their beeswax to be in the new series? God I hope so!!

Wet Hot American Summer launched the careers of many of the top comedic actors popular today, including Amy Poehler, Paul Rudd, Bradley Cooper, Elizabeth Banks, Ken Marino, and even Christopher Meloni (who plays the scene-stealing Vietnam vet, Gene). Janeane Garofalo and David Hyde Pierce are amazing as always, and kudos to Molly Shannon for playing weepy divorcee/art teacher Gail von Kleinenstein, who pulls off a romantic relationship with a very mature 12-year old in a surprisingly non-creepy way. Because this was a David Wain film, we’re also seeing a lot of his usual cadre of actors, including Michael Ian Black and the hilarious Michael Showalter, who plays both lovelorn Coop and Borscht Belt comic Alan Shemper. There are so many quoteable lines in this film, but my favorite has to be the Paul Rudd classic, “You taste like a burger. I don’t like you anymore.” What??!

In an ode to summer camp, I’m making an adult version of Bug Juice. Traditionally made with powder packets (let’s not even think about where Gene claims to keep his packets), I’m eschewing that sugary version for something a little more boozy. Of course if you don’t have the energy for a complex drink, vodka and green Kool-Aid will do the trick, but I think we can do better than that. This week, I’m serving up some Adult Bug Juice

Fill a glass (or mason jar) 3/4 full with chipped ice.  Add the first 3 ingredients one at a time over the ice.  Top with soda, and then the pineapple sherbet.

When I watch Wet Hot American Summer, I always feel like the actors who were in this film must have had the best time making it. I’ve read accounts that it was ridiculously cold and rainy during the filming of it, which makes me really feel for Elizabeth Banks in that skimpy bikini (wait a minute- with that body, I do not feel bad for her). No matter what Amy Poehler does with the rest of her career, I’ll always think of her as the controlling drama-nerd counselor, and ditto for Bradley Cooper, who despite various Academy Award nominations, will always be making out with Michael Ian Black in a tool shed in my mind. So mix up a big batch of Bug Juice, get out your “arts & farts & crafts” supplies and D&D dice, and blast some Loverboy because we’re headed back to 1981 like you’ve never seen it before. Cheers!

*Note:  This week’s cocktail can easily be made non-alcoholic.  Just leave out the Curaçao.  Also, my drink looks great perched on one of my new coasters from Monday Morning Crafts!