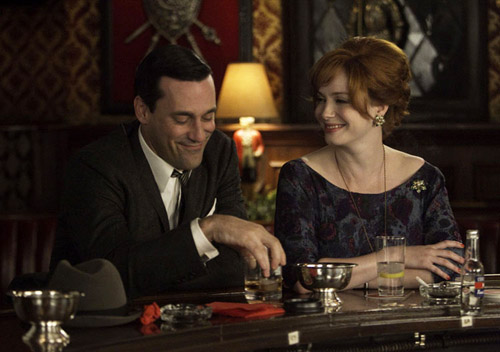 I generally make it a rule to not post about television series on Cinema Sips (other than those awesome made-for-tv movies I highlighted in January), but I had to make an exception for the series finale of Mad Men this upcoming Sunday night. I’m actually not sure there would be a Cinema Sips blog without Mad Men. This show was single-handedly responsible for making craft cocktails cool again, and it certainly got me thinking about the role that pop culture plays in our drinking habits. Pre-Mad Men, I was strictly a gin-and-tonic drinker (okay maybe a cosmopolitan if I wanted to get REALLY fancy), but after this show premiered, a new world of drinks was opened up to me. Old Fashioned’s!  Martini’s!  Mountain Dew and Vodka! I began to look forward to preparing cocktails to sip as I watched Don Draper spiral further and further down each week. And all that vintage barware! Thanks to this show, my cupboards are overflowing with retro-inspired glasses and shakers. As if holding a really beautiful glass full of vodka will make me as cool as Roger Sterling. Silly me- no one can be as cool as Roger Sterling.

To give it a proper send-off, I’m preparing an all-day marathon of favorite episodes, foods, and drinks. Here is my menu below. If you think of anything I’m missing, shout it out! Let’s party like it’s 1962.

My cocktail selection is one that I’ve featured on Cinema Sips before, and I think it’s a perfect send-off to this fantastic show. A White Negroni is strong, complex, and always classy- just like the characters on Mad Men.

Combine gin, Cocchi Americano, and vermouth in a mixing glass filled with ice. Stir until chilled. Strain into a chilled glass. Add lemon twist and serve.

I’m looking forward to revisiting some of my favorite episodes (“Shut the Door. Have a Seat”, “The Mountain King”, “The Suitcase”, “The Jet Set”, “The Hobo Code”, ANY episode with Miss Blankenship) and I’m really excited to slip on my best Betty Draper dress and relax on my mid-century modern sofa with a chilled cocktail. Is that all there is? Cheers!