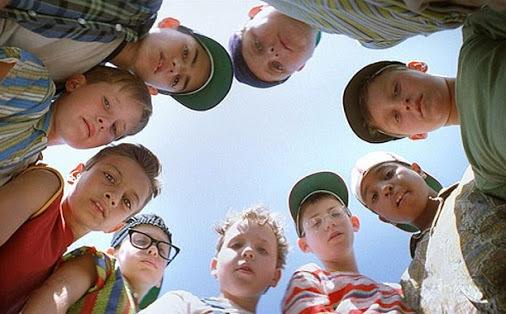 The Sultan of Swat! The Titan of Terror! The King of Crash! The Colossus of Clout! THE GREAT BAMBINO! Like Smalls in this week’s film The Sandlot (DVD/Download), I grew up clueless about all Babe Ruth euphemisms. You mean he’s not just a candy bar?? , said my ten-year-old self.  I credit The Sandlot and A League of Their Own with teaching me everything a gal needs to know about faking her way through an interest in summertime baseball. This was of course a helpful skill if I was ever going to become the future Mrs. Benny “The Jet” Rodriguez.

With Stand By Me-esque narration and a realistic depiction of awkward blended families, The Sandlot is a great coming-of-age story set in an era when kids could just play ball for hours without worrying about being kidnapped or strangled on the way home. Their greatest danger was a drooling English Mastiff behind a rusted fence, and the wrath of an oddly quiet Denis Leary once he learned his Babe Ruth-autographed baseball had been lost. And everyone knows Leary’s a Red Sox fan. So… yeah. No real danger there.

After gaining valuable life lessons on teamwork, the dangers of chewing tobacco, and kissing a hot lifeguard, the kids manage to get into “the biggest pickle” and have to resort to creative problem-solving. So while watching The Sandlot, I recommend drinking a Dirty Pickle.

In a shaker filled with ice, combine vodka, vermouth, and pickle juice.   Shake until chilled, then strain into a martini glass.  Garnish with a pickle spear. 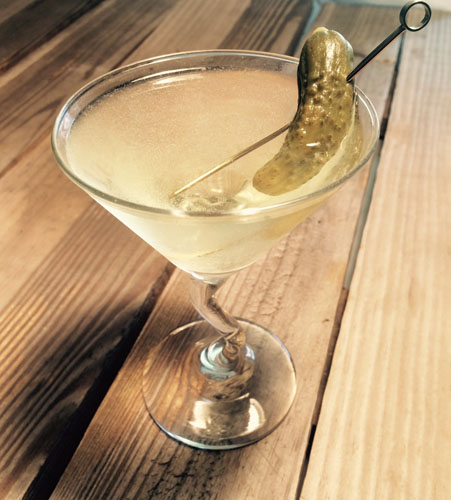 Who would have thought that 23 years later, I’d still be watching The Sandlot on a hot July day, hoping that nobody would make me go outside and play. Gotta say though, I’m glad to have graduated from a Fruitopia to a chilled cocktail. Cheers!