RSS Feed
← Much Ado About Nothing
Mamma Mia! →

The Door in the Floor

I’d like to give a shout-out to summer beach read season, or what I like to call, “that time of year magazines say it’s acceptable to read the books I actually read all year long.” One book that has found its way to the bottom of my beach bag multiple times is the John Irving classic A Widow for One Year, set in a Long Island seaside hamlet thick with privets and scandals. Although several Irving books have been adapted to the big screen, this one, and its film adaptation The Door in the Floor (DVD/Download), will always be my favorite.

Although this movie only covers the first half of the novel, it does this small bit exceptionally well. With Jeff Bridges as eccentric children’s book author Ted Cole, and Kim Basinger as his damaged wife Marion, the performances in this film are gut-wrenching and powerful. After losing their teenage sons in a tragic car accident, the couple struggle with being parents again to their young daughter Ruth (played by Elle Fanning). Marion starts sleeping with Eddie the intern, Ted continues sleeping with everyone, and little Ruth accepts it all with unnerving maturity. There is sand, there are waves, and there are cedar-shingled mansions. But there are also secrets, monsters, and stories best told in the dark.

For the record, Ted Cole is my hero. The man waltzes around in caftans (even on the squash court!) and a Van Gogh straw hat, just not giving a f*ck. His glass is always full, his barbs always the sharpest, and his squid-ink drawings like something out of a mental hospital. Enjoy this Ted Cole-inspired cocktail while you fantasize about afternoons dozing in an Adirondack chair, and nights drunk-peddling your bicycle home. While watching The Door in the Floor, I recommend drinking an Ink Well.

In a cocktail shaker, add all ingredients except bitters, and give it a dry shake. Add ice, then shake vigorously until egg white is foamy. Strain into a glass, and garnish with bitters. 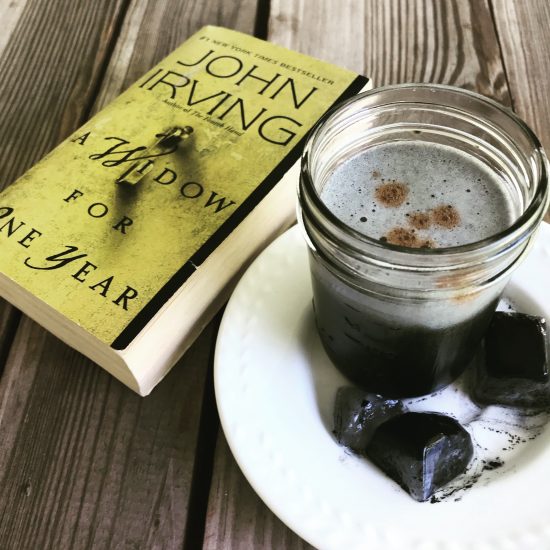 I have incredibly high hopes that there will one day be a film sequel covering the second half of the book, wherein young Ruth is grown up and experiences the sound of someone trying not to make a sound. Jeff Bridges- you better stick around for that one. It’s a doozy of a story. Cheers!