The Door in the Floor 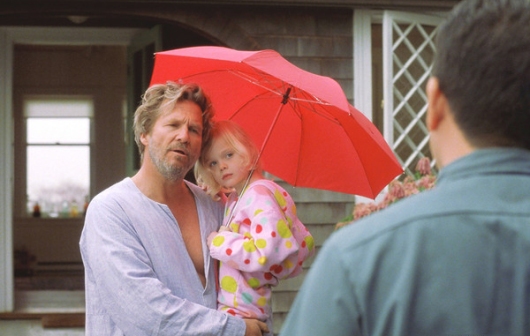 I’d like to give a shout-out to summer beach read season, or what I like to call, “that time of year magazines say it’s acceptable to read the books I actually read all year long.” One book that has found its way to the bottom of my beach bag multiple times is the John Irving classic A Widow for One Year, set in a Long Island seaside hamlet thick with privets and scandals. Although several Irving books have been adapted to the big screen, this one, and its film adaptation The Door in the Floor (DVD/Download), will always be my favorite.

Although this movie only covers the first half of the novel, it does this small bit exceptionally well. With Jeff Bridges as eccentric children’s book author Ted Cole, and Kim Basinger as his damaged wife Marion, the performances in this film are gut-wrenching and powerful. After losing their teenage sons in a tragic car accident, the couple struggle with being parents again to their young daughter Ruth (played by Elle Fanning). Marion starts sleeping with Eddie the intern, Ted continues sleeping with everyone, and little Ruth accepts it all with unnerving maturity. There is sand, there are waves, and there are cedar-shingled mansions. But there are also secrets, monsters, and stories best told in the dark.

For the record, Ted Cole is my hero. The man waltzes around in caftans (even on the squash court!) and a Van Gogh straw hat, just not giving a f*ck. His glass is always full, his barbs always the sharpest, and his squid-ink drawings like something out of a mental hospital. Enjoy this Ted Cole-inspired cocktail while you fantasize about afternoons dozing in an Adirondack chair, and nights drunk-peddling your bicycle home. While watching The Door in the Floor, I recommend drinking an Ink Well.

In a cocktail shaker, add all ingredients except bitters, and give it a dry shake. Add ice, then shake vigorously until egg white is foamy. Strain into a glass, and garnish with bitters.

I have incredibly high hopes that there will one day be a film sequel covering the second half of the book, wherein young Ruth is grown up and experiences the sound of someone trying not to make a sound. Jeff Bridges- you better stick around for that one. It’s a doozy of a story. Cheers!

Gangsters and high-class hookers. 1950’s movie stars. Glamorous fashions. Russell Crowe when he was young and thin. That’s right, I’m talking about L.A. Confidential (DVD/Download). This 1997 film based on a James Ellroy novel and directed by Curtis Hanson is one of my all-time favorites, and an absolutely perfect movie to pair with a cocktail. L.A. Confidential deserves and needs your undivided attention, so put down the iphones and laptops, and make your drink before you press Play because the plot has more twists and turns than a street in the Hollywood Hills.

L.A. Confidential centers on three cops in the LAPD who find their cases intersecting in one riveting vice/homicide mash-up. Guy Pearce plays bookish detective Edmund Exley, Russell Crowe plays the heavy-handed goon/good guy Bud White, and Kevin Spacey is the fun-loving Jack Vincennes who stumbles onto a vice case that was more than he bargained for. I love the way the script weaves back and forth between their cases, until eventually they are knotted together. Kim Basinger turns in a great performance as Lynn Bracken, the hooker dolled up to look like Veronica Lake. I love movies that reference classic cinema, and it’s a lot of fun to see actresses/models cut to look like Lake, Ginger Rogers, and Rita Hayworth. Of course one of the best scenes comes at the hands of Vincennes and Exley interrogating Lana Turner and Johnny Stompanato. I laugh every time because it’s one of the rare comedic moments in this pulpy noir film (outside of any scene with Danny DeVito of course).

For my cocktail this week, I’m serving up a drink that would have been fashionable around the time this movie takes place. It was popularized by Raymond Chandler, another noir writer, though I’m making it a little differently than he would have. In The Long Goodbye, he called for simply “half gin and half Rose’s lime juice,” but I like to add a little simple syrup to my gimlet. After all, Bud White is a sweetie at heart!

Mix gin, lime juice, and simple syrup together in a cocktail shaker over ice. Strain into a cocktail glass, and garnish with lime.

Enjoy this drink and pretend you’re Lynn Bracken entertaining either Russell Crowe or Guy Pearce in her glamorous Art Deco bungalow, or perhaps you’d rather be sipping it at the Brown Derby. This film makes me so nostalgic for the glamour of Tinseltown, because even when they’re crawling around looking for dead bodies or roughing up a gangster at an abandoned motel, these cops still call each other by their full names and wear hats. Things were so civilized back then! So enjoy L.A.Confidential as you sip your gimlet, and try not to get so drunk that you end up whispering Rollo Tomasi in your husband’s ear for the millionth time while he tries not to become annoyed with you (not that I’m speaking from experience, *wink*). Cheers!