90’s nostalgia seems to be everywhere these days. I’ve recently been combing through my stacks of VHS tapes to find a piece of movie magic that captures the heyday of high-concept action films the decade was known for.  What did I land on? The Harrison Ford/Tommy Lee Jones thinking-man’s thriller The Fugitive (DVD/Download).

Adapted from the 1960’s TV series (my grandpa was a big fan), Ford plays Dr. Richard Kimball, a renowned surgeon falsely convicted of killing his wife (hey Sela Ward! Where ya been?). He knows it was a one-armed-man that did the deed, but proof, and the actual killer, are long gone. While being transported to prison, his bus gets hit by a train, allowing him to escape. Tommy Lee Jones plays the US Marshall tasked with finding him, and thus sets off a manhunt through Chicago as the lawman hunts the doctor, who is simultaneously hunting the one-armed-man. The film manages to condense a 4-season TV show quite well, and Harrison Ford plays the smartest prison escapee since Andy Dufresne.   Tommy Lee Jones might be searching every farm house, hen house, and outhouse in the tri-state area, but he’ll have to be clever if he’s going up against Dr. Richard Kimball.

I love that there are essentially two man hunts going on in this film, and kudos to finding THE SCARIEST looking villain in the history of cinema. Not only does Andreas Katsulas look like the reincarnated Bela Lugosi, but he’s also got an undeniably creepy mechanical arm. Not that all prosthetics are creepy, but combined with a gun and a trench coat, it gives me the shivers. So while you watch the hunted Richard Kimball hunt the one-armed-man, sip on a Manhunt.

Dissolve the sugar in lemon juice and water at the bottom of a Boston shaker. Add the whiskey, and fill halfway with ice. Stir to combine and chill, then pour into a tumbler. Garnish with a cherry. 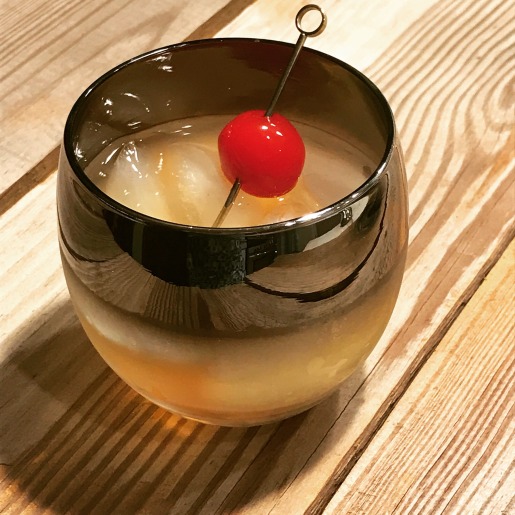 While watching The Fugitive, keep a look out for blink-and-you’ll-miss-her Julianne Moore, back in the days before anybody realized she could act. This is the movie I’ll always associate with Tommy Lee Jones, and his rugged Texas accent. Even in the big city of Chicago, he’s still the top lawman in town. Cheers!