If we’re talking about ‘man’ movies, I owe it to all you Cinema Sips readers to throw a little Tommy C. in the mix. But I’m not going to go with the obvious choice, by which I mean any of the two dozen Mission Impossible films he’s done (how many are we up to now- 8? 28?). No, I’m going to feature the movie that proved to me that Tom Cruise is so much more than just a tight butt and Chiclet teeth- the 1987 Barry Levinson classic Rain Man (DVD/Download).

Starring Cruise as a slippery car dealer who discovers he has an autistic brother (played masterfully by Dustin Hoffman), this film has so much heart, humor, and emotional growth that I dare even the biggest cynic to scoff. As Charlie and Raymond Babbitt traverse the USA in a classic convertible roadster, they learn what it means to be a family. In their world, family lets you borrow tighty wighties then fling them onto the highway. Family teaches you how to count cards and make a ridiculous amount of money on the blackjack tables in Vegas. And family gets you a tiny little TV so you can watch Judge Wapner and eat cheesy puffs in the middle of the day. We should all be so lucky to have a brother like that.

Raymond (or “Rain Man” as his little brother calls him) is a man of routine. He likes his apple juice in the afternoon, his orange soda with pizza (pizza on Mondays). Don’t even get him started on Fish Sticks. Frankly, I see nothing wrong with this. I eat the same breakfast every day, Chipotle every Monday, and rosé-all-day on Saturdays. Sometimes it’s easier to not overthink things. In that vein, I’ll be fixing a simple, Raymond-inspired cocktail to drink while I fall deeper in love with the Babbitt brothers. While watching Rain Man, I recommend drinking an Adult Apple Juice.

Combine apple juice, cognac, and simple syrup in a shaker with ice. Shake to chill, then strain into a coupe glass. Top with prosecco. Garnish with small apple wedges.

Although Dustin Hoffman won an Oscar for his portrayal of autistic savant Raymond, Tom Cruise is no slouch in this film either. It’s through his careful performance as Charlie that we start to empathize with the difficulties and triumphs that families dealing with autism face. In his flashy, big-hearted way, Cruise slowly worms his way into your heart. Tommy, if you’re listening, the world needs more Charlie Babbitt’s and fewer Ethan Hunt’s. Cheers! 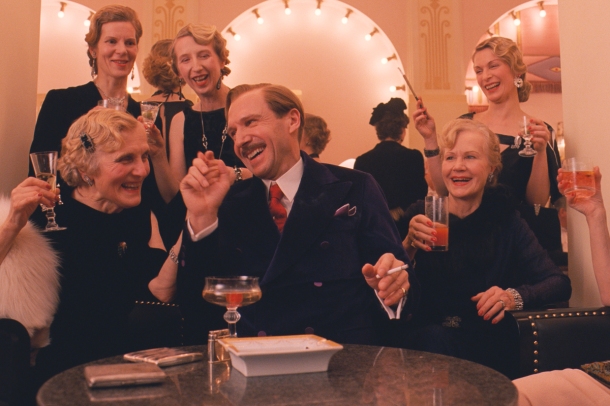 Oscar season is upon us once again, so this week I’m featuring the most cocktail-friendly of the Best Picture Nominees- The Grand Budapest Hotel (DVD/Download)*. Wes Anderson’s charming adventure/caper features all the classic Anderson tropes- fabulous sets, fabulous costumes, refined characters, and beautiful storytelling. It’s a world that I want to step into, martini glass in hand, wry smile on my face. Whatever happens on Sunday night, I’m just glad that more people are talking about this delightful film.

The Grand Budapest Hotel is about a resort hotel in the fictional European republic of Zubrowka (which incidentally is a Polish vodka brand) in the years between “The Great Wars”. M. Gustave is the concierge at this beautiful hotel, where he meets and –ahem- services Madame D. After her sudden death, he is bequeathed a valuable painting, but her family objects and charges M. Gustave with murder. The silky-tongued concierge must now escape from prison and make his way back to the Grand Budapest where the painting has been hidden. Helping him along is his trusted Lobby Boy, and the secret society of the Crossed Keys, a venerable who’s who of Anderson regulars. Ralph Fiennes is absolutely perfect as M. Gustave, playing the character as funny, charming, and desperate all at the same time. Of course I’m madly in love with the sets for the Grand Budapest Hotel, and wish I could check in for a two week break from reality.

My cocktail this week references the famous painting in the film, the fictional “Boy With Apple”. I’m excited to use Calvados this week, which is a French apple brandy. Surely, M. Gustav would have sipped this on many occasions. While watching The Grand Budapest Hotel, I recommend drinking a Grand Apple.

Mix all ingredients except champagne in a cocktail shaker filled with ice. Strain into a coupe glass, and garnish with pink champagne and apple.

The hue of this drink is not quite as pink as the Mendel’s boxes of confections in the film, but you get the idea. Because of the addition of pink champagne, this cocktail makes a great addition to your Oscar party this year. I know I’ll be sipping it during the telecast, and wishing I had a Lobby Boy to attend to my every need. Oh wait, isn’t that what they call a husband? 😉 Cheers!

*note: While I love The Grand Budapest Hotel and think it’s a great movie to watch with a cocktail, I will actually be rooting for Boyhood this Sunday. I cannot say enough good things about this film, nor even put into words the impact it’s had on me. If you haven’t seen it, watch it. Then buy the book.