Sometimes, you just need a good excuse for a Tiki cocktail. And what better excuse than Walt Disney’s CinemaScope extravaganza 20,000 Leagues Under the Sea (Disc/Download)? With island names like Volcania, and talk of “grog”, this movie seems like a perfect match for drinks involving fire and rum. Let’s climb aboard the Nautilus and pour one out!

Starring James Mason as Captain Nemo, with Peter Lorre, Paul Lukas, and Kirk Douglas as the men tasked with investigating a mysterious “sea monster”, 20,000 Leagues Under the Sea is based on the Jules Verne novel about the adventures of a futuristic underwater ship in the 19th century. What makes this such a joy to watch is the sheer opulence of the production design, with pipe organs, circular viewing portals, and grand salons not often found below deck. Additionally, the cinematic practical effects make this a true fantasy experience. You can practically taste the saltwater coming off that giant attacking squid, or feel the warmth of a lush, blue, tropical isle thirty seconds before the natives attack.

Speaking of tropical, with location shooting taking place in the Bahamas and Jamaica, a rum-based drink is practically required. This one is a slight variation of the Sea Serpent’s Embrace, served at Trader Sam’s Enchanted Tiki Bar in Disneyland. In a fun twist, I’m setting it on fire by using a hollowed-out lime filled with overproof rum. When watching 20,000 Leagues Under the Sea, I recommend drinking this Volcania cocktail.

Combine all ingredients with a cup of ice in a shaker. Shake until chilled, then strain over a glass filled with a fresh cup of ice. Top with half a hollowed-out lime filled with overproof rum. Light it on fire.

If sexy, bearded James Mason in a tight knit turtleneck does it for you, then you’ll definitely want to give this film a watch. Even if you’re not into sci-fi, there’s enough adventure in this to make 20,000 Leagues worth your time. It is, indeed, a whale of a tale. Cheers!

Beauty and the Beast

Ask any female bookworm who grew up in the ’90s what her favorite Disney movie was, and you’d probably get the same answer- Beauty and the Beast (Disc/Download). Smart, shy girl doesn’t fit in with the people in her small town, longs for the type of adventure she’s only read about in stories, but feels resigned to a quiet life with her dad and his gadgets. Then, a gruff hero comes into her life and woos her with a library and fancy soup. To say that I idolized this character in 1991 would be an understatement. I had Belle dolls, Belle posters, Belle Halloween costumes, and even a prized Belle Trapper Keeper gracing my desk. I also had a Beast doll you could pull the head off of to make him magically transform into a human (which, looking back on it, was a little creepy). In short, I was A FAN. I was skeptical that a live action version of this tale could ever work, but I should have known Disney would make all my adult Belle dreams come true too.

I remember the first time I saw this adaptation in the theater a few years ago. Emma Watson opened her mouth to sing “Little town, it’s a quiet village….” and reader, I got goosebumps. These songs were so ingrained in my memory that I could recall every word and note with perfect precision. It was like a trip back to childhood, where movies seemed completely wondrous, and characters lived in your head in a way they simply don’t when you’re an adult. I loved A Star Is Born, but let’s just say I don’t have Jackson or Ally dolls in my bedroom. But hey, if Disney wants to make a Dan Stevens “Beast” doll, or even a Luke Evans “Gaston” doll with that show-stopping baritone voice recorded on a pull string, they’ve still got a buyer in me.

Taking place in a small French village, and featuring a magic rose that slowly drops its petals, this movie deserves the kind of cocktail you could enjoy sipping for hours in a gigantic library by the light of a talking candelabra. While watching Beauty and the Beast, I recommend drinking a Rosewater Gimlet.

Combine all ingredients in a shaker with ice. Shake until chilled, then strain into a coupe glass containing an ice ball. Garnish with a rose petal.

Although there are some new tunes added to this version, the standout song is still “Tale as Old as Time”, sung here by Emma Thompson instead of Angela Lansbury. Really, this is the perfect anthem, for what’s more classic than an enemies-to-lovers story featuring a plucky girl and a gruff hero with a heart of gold? Thirty years later and it’s still bringing me as much joy as it did when I was eight. Cheers!

The Sword in the Stone 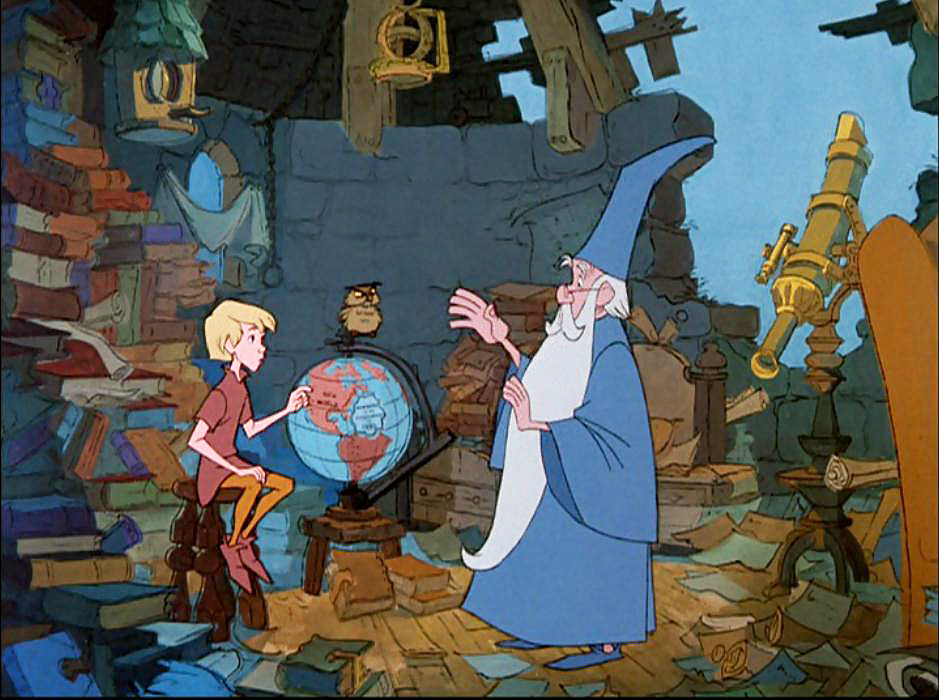 My anticipation and excitement for Wes Anderson’s Isle of Dogs has me itching to watch more animation this month.  I have very strong thoughts on modern animation, having grown up in the days before computers did absolutely everything. Back then, you could go to Disney World’s MGM Studios and actually watch artists use a pencil and paper to draw characters. I know, crazy right? If we’re talking animation, I think it’s essential to begin with Disney- the studio that turned this medium into a true cinematic artform. Although I love so many Disney animated features, my enduring favorite is undoubtedly The Sword in the Stone (DVD/Download).

Some might see this as an odd choice for me, since there is nary a ballgown or princess in sight.  However what it lacks in unrealistic romantic ideals, The Sword in the Stone more than makes up for it in visual sumptuousness. When I watch this story of young Arthur toiling away in poverty, learning about science from Merlin the Wizard and Archimedes the Owl, I feel like I can actually see the blood, sweat, and tears that went into drawing each frame. Every line and color cell is visible to the naked eye, with the ultimate effect being a moving painting. This is something I don’t get today with the Pixar films, where everything looks a bit like a plastic toy, regardless of whether it’s a Toy Story sequel or not.

I would be remiss if I didn’t mention the magnificent, marvelous, mad Madam Mim. She pits good old-fashioned sorcery against Merlin’s scientific approach, but gosh what a delightful villain! Of any character in this film, she seems the most likely to relax with a cocktail after a day of wreaking havoc. While watching The Sword in the Stone, I recommend drinking a Mad Madam Mim Martini.

Mix vodka, cranberry juice, and grenadine in a shaker filled with ice. Strain into a martini glass, then slowly layer blue curacao. Garnish with Cocktail Caviar balls (aka- the pox!)

1960’s Disney films have such a unique, gritty style that got lost in the Beauty and the Beast-era films of the 1990’s. Somewhere along the way, it became trendy to take the human element out of the equation. Maybe one day we’ll cycle back, but for now, watch this vintage gem and geek out on Merlin’s science lessons. After all, knowledge is true power. Cheers! 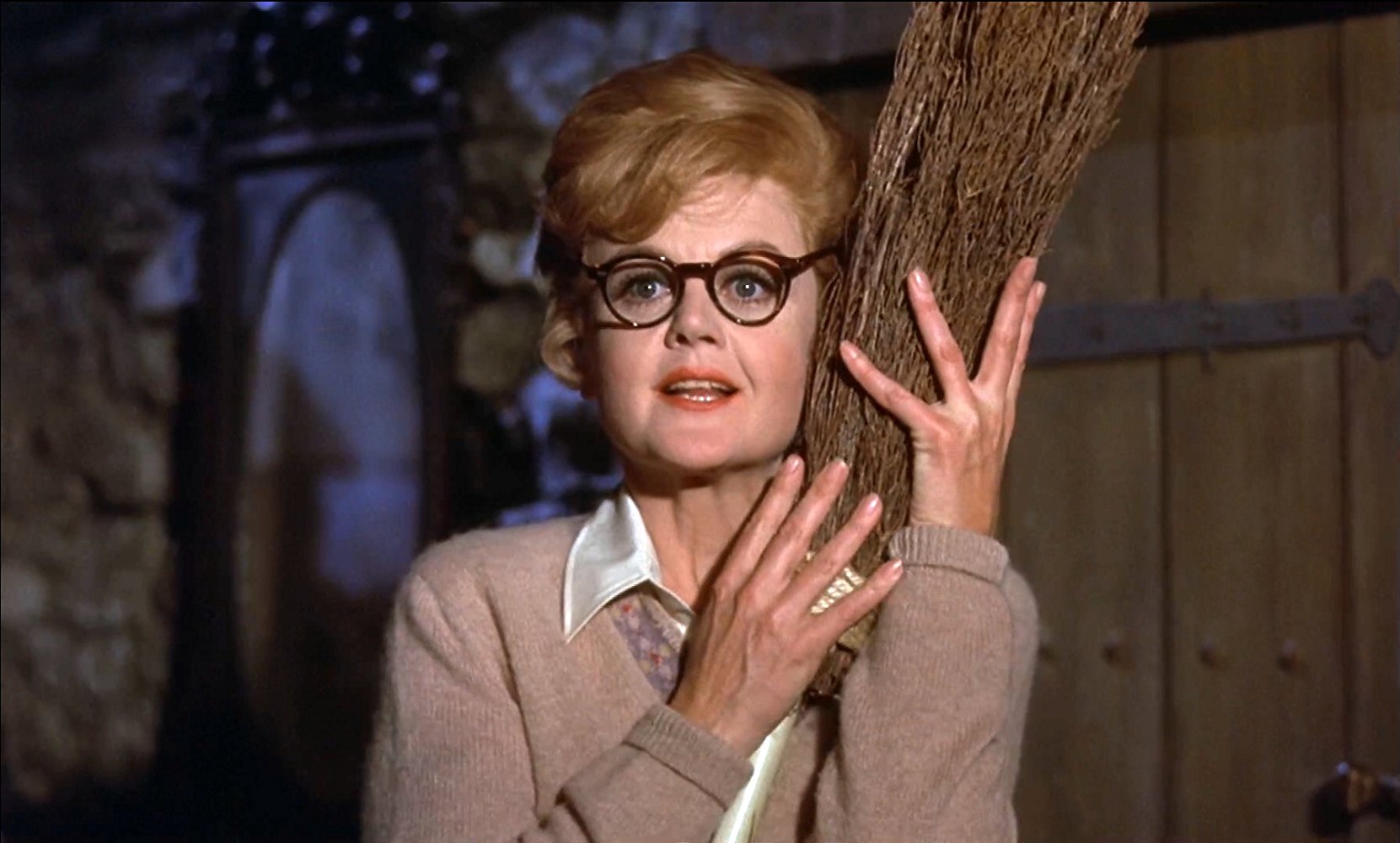 No matter how many sexy pirate or sexy nurse costumes flood the market in October, to me Halloween will always be a holiday for kids. Sure, I may still put on a funky hat or a fake moustache and eat my weight in fun-sized Heath bars, but I know I’ll never recapture the anticipatory magic of slipping a coat over my Little Mermaid seashell bra and heading out into a chilly Pennsylvania evening, empty plastic pumpkin in hand. Therefore this week on Cinema Sips, I’m closing out a month of witch movies with a childhood favorite, Bedknobs and Broomsticks (DVD/Download).

Many people tend to compare this movie to Mary Poppins, and they wouldn’t be wrong. Both feature beloved British actresses, catchy songs, a bit of magic, dirty London streets, and an unfortunate live action/cartoon interlude. However, Bedknobs and Broomsticks is slightly grittier than Mary and her penguins. This film follows a trio of homeless orphaned children sent to live in the village of Pepperinge Eye during the WWII bombing of London. They wind up in the care of Angela Lansbury, a secret witch-in-training with a surly disposition and an endless supply of tweed skirts, who feeds them grain bowls and can’t ride a broom to save her life. But in the end, they all work together on magic spells to defeat the Nazi’s, and live happily ever after. Because Disney!

Lansbury’s Eglantine Price is a buttoned up lady, whose one indulgence (I like to imagine), is a small glass of sherry and a good book.  Actually, that sounds kind of perfect to me as well.  Let’s celebrate this unlikeliest of witches with a classic EGG-white cocktail, the Sherry Flip.

Combine all ingredients in a shaker without ice and shake well to combine. Then add ice, and shake vigorously to chill. Strain into a small wine glass. Dust with nutmeg. 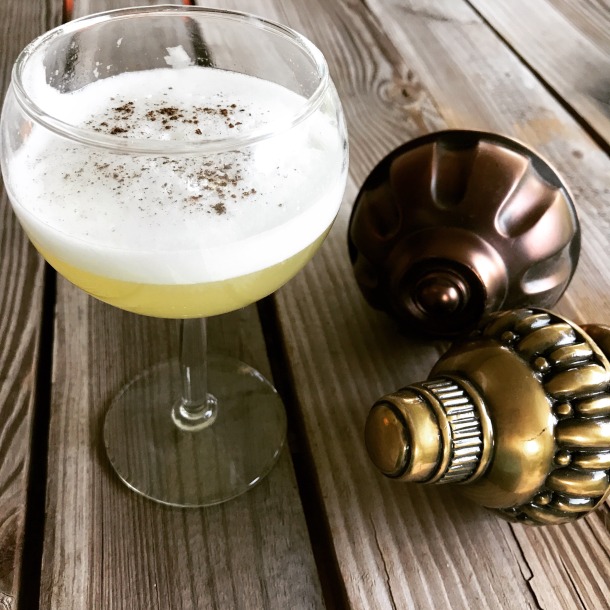 Although many witches in cinema use their powers for romantic love, I applaud Eglantine on using hers for the good of her country. You see, witches don’t have to be scary. They can be intriguing, intelligent, kind, and pragmatic. They can have a thirst for knowledge that takes them from the bookshops on Portobello Road to a magical undersea dance hall. It’s all in your perception. Cheers!