I’ve never been a fan of movies featuring dusty, sweaty actors, but when that movie contains Paul Newman and his impressive abs, all bets are off. Cool Hand Luke (Disc/Download) is an ironic title for a movie about an extremely hot man in an extremely hot place, but I’ve since realized there are a lot of ways to be cool. Leave it to this icon to school us.

I suppose winter is a great time to watch a film about a sweltering prison camp in the Deep South because you’ll really want to stick your head in a snowbank after Luke’s forth or fifth trip to “the box”. I don’t know what I expected going into this, but it wasn’t a Shawshank-esque tale of a maligned prisoner rising up against his sadistic guards. Frankly, I didn’t know work camps like this existed in the prison system after WWII. Paul Newman is perfect in his role as the smart, charismatic Luke because the viewer falls under his spell right along with his fellow prisoners. We believe that Luke is the one guy who can escape this hellhole because his smile, his zen attitude, his tenacity in an egg-eating competition tells us so. He doesn’t have much in the world, but he’s got the one thing that matters—grit.

Speaking of eggs, I’ll admit I had a hard time watching Luke chow down on fifty of the hard-boiled variety, his abs slowly disappearing under a sulfurous cloud of bloat. I like eggs, particularly in a cocktail, but only in moderation. While watching Cool Hand Luke, enjoy this classic egg-white cocktail, the Rum Sour.

Combine rum, lemon juice, maple syrup, and egg white in a shaker without ice. Shake vigorously for ten seconds, then add ice. Shake for another thirty seconds to chill, then strain into a coupe glass.

With a strong supporting cast that includes Academy Award winner George Kennedy, Dennis Hopper, and Harry Dean Stanton, this classic film is one I wished I’d watched sooner. Don’t let the dust and sweat turn you off—this is a damn cool flick. Cheers!

Cat on a Hot Tin Roof

This week, I’m all about bourbon.  And honestly, you can’t find a better bourbon movie than Cat on a Hot Tin Roof (Disc/Download).  I’m pretty sure Paul Newman had a highball glass glued to his hand throughout the shoot, and lord was there ever a sexier drunk than 1950s-era Newman?  I think not. If you’re sweltering through an endless summer like Brick, better grab the ice bucket and the full bottle—you’ll need them to get through this steamy drama.

Looking at this film purely from an aesthetic point of view, I’m immediately hooked by the gorgeous southern plantation sets, Elizabeth Taylor’s sensual costumes, and the rugged beauty of Paul Newman.  The man looks to be carved from marble, and is of course one hell of an actor.  Then there’s Elizabeth Taylor’s Maggie “the cat”, my role model for womanhood.  She’s tough, she’s conniving, and she’s not afraid to tell off bratty children.  Watching her smear ice cream over an annoying little girl’s head is SUCH a satisfying moment for me, and proof she’s the one with real Life in her.  It’s no wonder “Big Daddy” prefers her to his other daughter-in-law—you want the woman who will give you a cashmere robe for your birthday, not another loud-mouthed grandchild.

Although we’re supposed to feel anger or sympathy for Paul Newman’s alcoholic character Brick, I can’t help but be impressed.  This man knows how to hold his liquor!  Whether you’re sweating in a Mississippi plantation or just watching people onscreen do it, a cool drink will get you through the worst days of summer.  While watching Cat on a Hot Tin Roof, I recommend drinking this Mississippi Punch.

Combine all ingredients in a shaker filled with ice. Shake until chilled, then strain into a glass filled with crushed ice.  Garnish with an orange wedge.

Just like this cocktail, Cat on a Hot Tin Roof is INTENSE.  By the end I’m exhausted from the emotional turmoil of these characters, and I wish someone would put them all out of their misery. But then Brick smirks and tells Maggie to “lock the door,” and I get that warm, satisfied feeling only a classic film and a great line can deliver.  Well… a great line and a lot of bourbon.  Cheers!

Every year in December, I get out my boxes of ornaments and the plastic Christmas tree and put on that classic holiday record by Alvin and the Chipmunks. You know the main song, where Alvin longs for a hula hoop? Well, the hula hoop inspired this week’s Cinema Sips pick, an underrated Coen Brothers gem The Hudsucker Proxy (DVD/Download).

An homage to so many wonderful films of the 1930’s and 40’s (His Girl Friday, It’s a Wonderful Life, Sullivan’s Travels, etc.), The Hudsucker Proxy follows everyman Norville Barnes (played by Tim Robbins) on his journey from Muncie, Indiana to New York City circa 1958. He gets a job in the mailroom of Hudsucker Industries, but dreams of bigger things. His dream includes a piece of paper with a circle on it, which would later turn out to be the hula hoop. Through a complicated series of events, Norville finds himself promoted to CEO of Hudsucker, where he takes the company to great heights with the hula hoop idea. Eventually, things spiral out of control as his ego gets larger and larger, until he finds himself on the ledge of the forty-fourth floor of the Hudsucker building on New Year’s Eve, ready to jump. Unfortunately this film was a box office flop when it was released, but I still love it for the amazing production design (think Art Deco meets Bauhaus), fabulous costumes, and sparkling script. Plus, any film featuring Paul Newman is okay by me.

My drink this week is inspired by Norville and his lady love Amy Archer’s love of martinis. A great festive version of the classic martini is the pear martini. I like to dress it up with a little fresh pear and cranberries to give it a holiday feel.  When watching The Hudsucker Proxy, I recommend drinking a Holiday Pear Martini.

Fresh Pear and cranberries for garnish

Combine vodka, St. Germain, lemon juice, and pear liqueur over ice in a cocktail shaker and shake until chilled. Strain into a chilled martini glass, and garnish with fresh pear and cranberries.  Bendy straw optional. 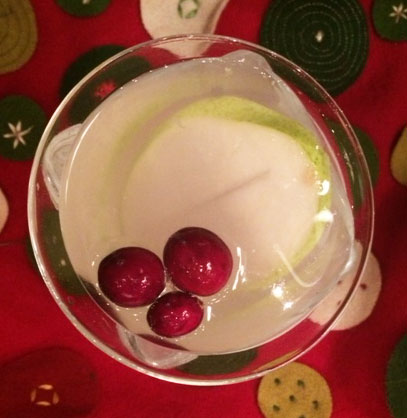 The Hudsucker Proxy is classic Coen Brothers holiday fun, and I’m so excited to watch it again this year. It makes me wish that women still wore hats and talked like Rosalind Russell. As the stress of the holiday sets in, remember to take a two-hour break with this film and a tasty cocktail, and maybe even put on that old Alvin and the Chipmunks record. You know, for kids ;-).