The World of Henry Orient

YA literature of the 1950’s and ‘60’s knew what girls wanted. I think of it as the three F’s:  Friendship, Freedom, and Fun. Some of my favorite authors of the time period, including Jane Trahey (The Trouble With Angels), Mary Rogers (Freaky Friday), and Beverly Cleary (Ramona books) covered the three F’s so well that their books and movie adaptations will always be timeless.  Such is the case with this week’s film, based on the novel by Nora Johnson, The World of Henry Orient (Disc/Download).

In many ways, this movie displays a fairy-tale version of Manhattan.  Two teenage girls roam freely through Central Park, leaping over sidewalk trash cans, having grand and glorious adventures under the shadow of skyscrapers and brownstones without fear of being raped, murdered, or mugged. Marian and Viv are like charming characters from a Wes Anderson film (down to the fur coat worn by disaffected Viv); more concerned with meeting heartthrob pianist Henry Orient (played by Peter Sellers) than they are with their parents’ divorces.  In fact, it’s only when Viv’s adulterous mother (played by a sexxxxxxy Angela Lansbury) has an affair with Orient that the adult world starts to seep into their halcyon afternoons.  They’re suddenly forced to grow up, to realize that the people who are supposed to protect them aren’t doing such a good job of it.  Maybe all a girl can really count on is her BFF. And, a cuddly Tom Bosley.

The Peter Sellers character Henry Orient is a strange bird.  He spends most of his time having affairs and playing piano very, very badly. His name gives rise to some Asian-influenced style choices by the girls, including one scene with conical hats, and his apartment is very red and very lacquered.  He also sounds like he hails from either Italy or New Jersey, depending on the scene and the sentence.  Truly, a man of mystery.  While watching The World of Henry Orient, I suggest drinking this Red Lotus cocktail

Combine ingredients in a shaker filled with ice, shake until chilled, then strain into a martini glass. 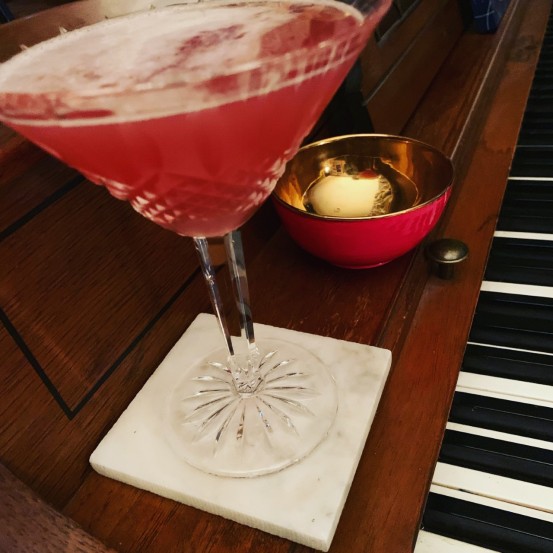 There’s something about these vintage teen girl stories which resonates even stronger with me than the YA literature we know today. In discovering The World of Henry Orient as an adult, I’ve found a tale that feels like a cool wind whipping through the leaves of Central Park. It allows me to imagine an innocent place where precocious girls giggle, whisper, and “adventure” long after the sun has set, experiencing the heady rush of true freedom. Cheers!

Where the Boys Are

Image Credit MGM 1960, Where the Boys Are

It’s spring break in Austin, TX and you know what that means- millions of co-eds fleeing in search of sandy beaches, while millions of music, film, and internet movers-and-shakers descend on the city to fill up our restaurants and hotels during the SXSW Festival. If I still got a spring break, I would definitely be heading for the beach, but since I don’t, the next best thing is watching a movie about spring break at the beach. No, I’m not talking about Spring Breakers– yikes! Rather, I’m watching Where the Boys Are (DVD/Download), a delightful film from 1960 starring Connie Francis, Dolores Hart, and a very young George Hamilton. Yes, that George Hamilton of the tangelo tan. The movie may have been somewhat racy for the time, (Necking on the beach! Giving it up to a Yale-y in a seedy motor lodge! Underage drinking- oh my!) but now it’s just quaint and adorable.

Where the Boys Are follows four northern co-eds who head to Ft. Lauderdale for spring break. Of course they meet boys and each girl must decide it she’s a “good girl” or a “bad girl” when it comes to shacking up. Except Connie Francis, that is, who unfortunately gets saddled with a dialectic jazz musician who looks to be about 40 years old but is playing 20. A self-professed girl’s hockey team member, she’s definitely the Lady Edith of this movie. Dolores Hart fares a little better with rich playboy-with-a-heart George Hamilton, and Paula Prentiss is matched with her usual co-star Jim Hutton (presumably because they’re both about 6 ½ feet tall). Then there’s poor Yvette Mimieux. She plays the girl who’s desperate to hook an Ivy Leaguer so she can drop out of college and be a housewife. Feminists would probably have a field day with this movie, but I look at it as simply her choice. I chose to stay in college, have a career, and make a great life for myself, but to each her own.

My drink this week is tiki-inspired, sort of a rum version of the Cosmopolitan. Fruity and boozy, this cocktail is a great way to kick off a week away from school. Even if you’re not sipping it while laying by the beach or pool, it’s still like a vacation in a glass. When you’re watching Where the Boys Are, I highly recommend drinking a Beachcomber.

Combine all ingredients into a cocktail shaker over ice. Shake well, then strain into a coup glass. Garnish with a maraschino cherry and a tiny umbrella.

With its catchy Connie Francis tunes, cute 60’s bikinis, Modcloth-esque dresses, and candy-colored motel set, this movie is pure fun. Think of it as a pre-Sex and the City, long before Carrie Bradshaw ever strapped on her Manolos. In Where the Boys Are, female friendship trumps boys every time, and even the sordid melodramatic scenes are still relatively innocent. Really, underwater bar mermaid Lola Fandango is about as trashy as this film gets. If spring break in Florida was actually as fun as it appears to be in this movie, I might be tempted to go back to school. Cheers!