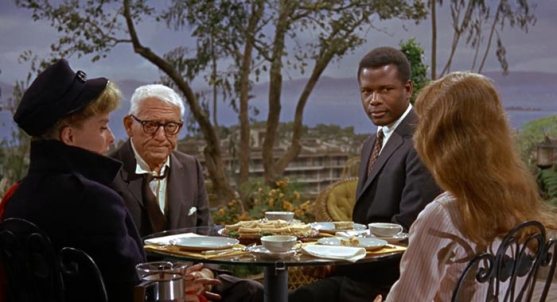 This week marks yet another Thanksgiving for Cinema Sips, and although in the past we’ve covered cinema feasts such as those in The Godfather and Giant, I really don’t feel like cooking this year. Luckily, Guess Who’s Coming to Dinner (Disc/Download) features no actual dinner; only cocktails.  In other words, my kind of party!

Made in 1967 during the height of the civil rights movement, this final Katharine Hepburn/Spencer Tracy film collaboration features Sidney Poitier as the fiancé of a white, upper-class daughter of two liberals who have difficulty practicing what they preach.  Sure, they proudly proclaim that African Americans should have equal rights, but when their daughter gets off a plane from Hawaii with a handsome black doctor, those beliefs become complicated.  Directed by Stanley Kramer, this richly drawn film presents all sides to the debate of love vs. societal prejudice.  The daughter (played by Hepburn’s niece Katharine Houghton) comes across as naïve, but with a pure heart untouched by prejudice and hate.  And isn’t that what we all wish for?  That kids would never have to hear ugly racist words, and never be faced with a “pigmentation problem” as Tracy puts it. This girl has found the perfect man, one who’s handsome, smart, and respectful, and looks ever-so-charming with a daisy behind his ear.  I’d say that’s worth fighting a few bigots for.

As this dinner party at a San Francisco mansion grows to include the bride’s parents, the groom’s parents, the central couple, and a priest, the bar cart gets some heavy use. Meanwhile, the sassy maid is hiding in the kitchen with her cauldron of turtle soup, wondering why these crazy people won’t sit down and eat something.  Let’s take our lead from the moms in this movie, those sensible moms with a preference for sherry and young love.  While watching Guess Who’s Coming to Dinner, I recommend drinking a Sherry Cobbler.

Combine simple syrup and one slice each of orange and lemon in the bottom of a shaker.  Muddle oranges, then add sherry and ice.  Shake well, until chilled.  Strain into a Collins glass filled with crushed ice, then garnish with a fresh orange slice, lemon slice and fresh cranberries. 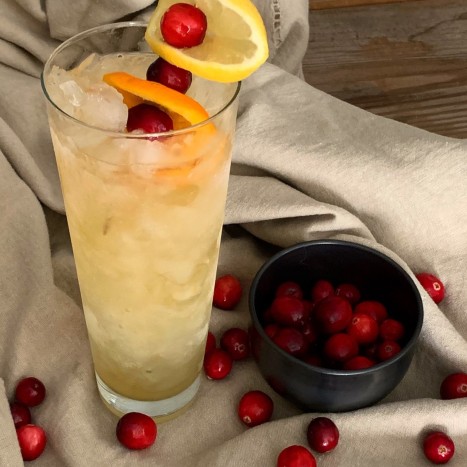 As I write this post, many dinner tables across America are still deeply divided.  There is a chasm between young and old, liberal and conservative, much as there was over fifty years ago in this movie.  Equal rights are still a dream we’re fighting for, but as this movie shows us, it’s worth fighting for.  It’s worth it to stand up to your elders and say love is all that matters; hate has no place at the table.  Cheers!