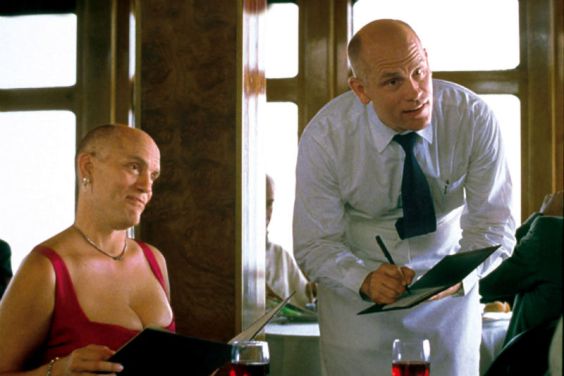 If you could crawl into the mind of a celebrity, who would it be? For me, the answer is easy- Nicholas Cage. Not only would it likely be a weird and wacky ride, but I might be able to save him (and the rest of humanity) from some truly terrible films. In this week’s film Being John Malkovich (DVD/Download), one of the great American actors of the 20th century becomes the host du jour. Why did screenwriter Charlie Kaufman choose actor John Malkovich? Because it’s just fun to say Malkovich.

Directed by Spike Jonze, Being John Malkovich has all the movie elements I love. Unusual sets (7 ½ floor, anyone?), puppets, good-looking celebrities going ugly (YIKES Cameron Diaz), and famous actors playing themselves. As greasy-haired puppeteer Craig Schwartz, John Cusack slides through the portal into John Malkovich’s mind and eventually opens the actor up to a slew of other people taking possession.  As the film progresses, we start to examine what makes a person uniquely themselves, and how much of our minds are controlled by outside influences.

Although many people try to inhabit the mind of Malkovich, the 105-years-young Dr. Lester has perhaps the biggest claim to this coveted mental real estate. It’s his building where the portal on the 7 ½ floor exists, and he’s spent his life drinking carrot juice to stay vital. Wouldn’t it be great to find a cocktail that reverses the aging process? I’m willing to try if you are. While watching Being John Malkovich, I recommend drinking a Carrot Collins.

Combine all ingredients in a collins glass over ice. Stir gently, and garnish with a sprig of mint.

One of the most interesting scenes in the film is when John Malkovich goes through his own portal, landing inside his own mind. What he encounters is a collection of Malkovich clones, who can speak only his surname; or as he puts it, “a world no man should see.” I can empathize. A room full of Liz Locke’s? TERRIFYING. Cheers!

Although I had already seen this week’s film Her (DVD/Download) while it was in movie theaters last year, I decided it was time to check it out again, this time with my significant other and a lovely, bright cocktail. This was by far my favorite film of 2013, calling to mind other personal favorites like Eternal Sunshine of the Spotless Mind and Lost in Translation. It’s an unconventional love story, set against the backdrop of futuristic urban beauty, and  moody instrumental music. I was thrilled when this film won the Academy Award for Best Original Screenplay because the script by Spike Jonze is truly beautiful. It makes me want to give up writing altogether because I fear that I’ll never be able to string words together as perfectly as he does in this film. Nevertheless, I was thrilled to sit back and let this lovely film wash over me once again.

Her is set in the future, however it feels like a just-out-of-reach future. People basically wear what we wear now (though men’s trousers are a bit more high-waisted), and spend their days glued to their smart phones. The architecture is a little more interesting, and most people don’t read books on paper anymore. Additionally, writing has become such a lost art that the main character Theodore (played superbly by Joaquin Phoenix) has a job crafting personal letters on behalf of others. It’s interesting to watch him writing these romantic love letters while his own love life is crumbling, as he’s still reeling from the dissolution of his marriage. Early on in the film, he gets a new computer operating system, but this OS named Samantha can actually talk to him. They begin a relationship, eventually falling in love. It sounds crazy to think that a man could fall in love with his computer, but oddly enough this is one of the most romantic stories I’ve seen on film in recent years. He’s happy with Samantha (voiced perfectly by Scarlett Johansson) and watching their romance progress is just riveting. I’ve often found that most literary love stories are totally ruined in their translation to film, simply because what I see on the screen never really matches up to the picture I’ve created in my mind. By taking away a physical half in this relationship, Spike Jonze has made a romantic film for the dreamers out there. Samantha the OS is anything I want her to be.

When I started raving about this film many months ago, I had another friend dismiss it by saying “ugh, too much orange.” Well, that’s true, there are a lot of warm colors used in the production design. I actually love all the orange though. Perhaps the reason is because I will always associate the color orange with my time spent studying in Valencia, Spain during college. The city was vibrant and alive, with futuristic architecture by Santiago Calatrava, and I found myself gravitating to bold oranges and reds both in my clothing and design choices. Thus my drink this week is inspired by that time in my life, and really does pair nicely with Her. This week, I’m enjoying Agua de Valencia.

In a large pitcher or bottle, combine all ingredients, adding sugar a little at a time until you get it to your desired sweetness. Chill for an hour, then serve in ice-filled glasses.

This is a great drink for a crowd because it can (and should) be made in advance of your party, and it’s refreshing on those hot days where should be autumn, but unfortunately still feels like summer (hello September in Texas). The drink is a beautiful yellow-orange color, and feels right at home with the visual styling of this film. The characters in Her might be a little lost, and a little sad at times, but they still seem hopeful to me. After watching this, I find myself feeling hopeful too, for even if we’re all eventually tethered to our technology, we’ll still find ways to make personal connections. That’s a world that I’ll still want to live in. Only, don’t expect me to wear unflattering trousers. Cheers!