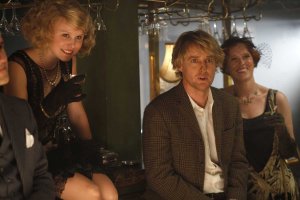 This week is something I’ve been looking forward to since I started Cinema Sips. I hate to play favorites, and obviously I’m still discovering new cocktails while I write this blog, but if I had to chose a favorite drink, it would definitely be the French ’75. Typically I’ve been starting with the movie and finding a drink that I think pairs nicely with it. But in this case, the French ’75 is so special to me that I couldn’t wait for a movie to come along that would inspire me to choose this drink. This week, I searched my DVD (and VHS and Laserdisc!) collections in order to find the best excuse possible to make a French ’75, and I finally settled on one of my favorite films of the past few years, Midnight in Paris.

I was never a huge fan of Woody Allen’s older films (sorry, not even Annie Hall) but I really love his newer works. What I love about Midnight in Paris is that although it’s a completely absurd scenario (a writer travels to Paris with his obnoxious fiance, and while walking the streets at night, finds himself in a time-warp of literary giants) I really root for the characters and want this plot to be a reality. Every night at midnight, this writer (played by Owen Wilson) is transported to his dream era- Paris in the 1920’s. It was the heyday of writers and artists and thinkers, and also a heyday for cocktail drinkers. Coincidence? I think not. He meets F. Scott Fitzgerald and his charming wife Zelda (played brilliantly by Alison Pill), along with Ernest Hemingway, Gertrude Stein, Man Ray, and Salvador Dali. When I first read about the plot of this movie I thought it sounded absurd; however, Owen Wilson’s wide-eyed, giddy portrayal of the modern writer makes me feel more than excited to go on this journey with him. And while you’re going on this journey, why not enjoy a fabulous gin cocktail?

Over the years, I’ve honed my recipe of the French ’75, and now lucky readers of Cinema Sips get to reap the benefits:

Combine gin, lemon juice, and simple syrup in a cocktail shaker over ice. Shake until cold, then pour into martini glass. Top with champagne and lemon twist.

I chose Midnight in Paris for my French ’75 pairing first of all because of the film’s Parisian setting, but second of all because it’s widely known that F. Scott Fitzgerald was a heavy gin drinker. This is my very favorite gin cocktail, so what better way to celebrate a literary hero of mine. Also, this drink feels like a cocktail of a bygone era, and like the main character, I dream of being transported back to a time when all of these amazing artists were mingling and creating and making history. By the end of the film, Owen Wilson realizes that everybody has their own unique ideal time and place. I’m lucky that I can truthfully say I’m living in mine right now-  Austin TX circa 2013. But if I ever want to take a vacation (in my mind) to the most fabulous version of Paris, I just have to put on this movie and make sure the gin is cold and the champagne is flowing. Cheers!