RSS Feed
← Special Edition: Oscars
Where the Boys Are → 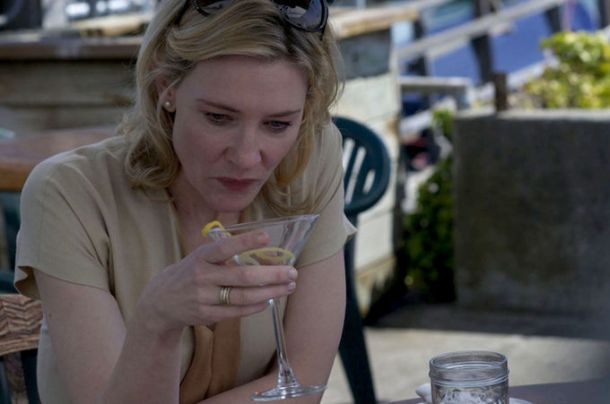 After a very late night spent watching The Oscars on Sunday, I admit I had a tough time getting up the next morning. The only thing that got me out of bed was the promise of seeing a recap of last-night’s dresses all over the internet. I admit that I did pretty darn well in my office Oscar pool, though of course there were some definite sure things on the ballot this year. One of those sure things was Cate Blanchett, who very deservedly won her Best Actress statuette  for Blue Jasmine. In celebration of her victory as well as her unfailingly good fashion sense, I’m watching the wonderful film for which she was honored.

Blue Jasmine (DVD/Download) tells the story of a wealthy New York socialite whose cheating, embezzling husband commits suicide while in prison for his financial crimes. Broke and lost, Jasmine seeks refuge at her sister Ginger’s apartment in San Francisco. Throughout the film, we discover that Jasmine’s seemingly perfect former life with her husband (played by Alec Baldwin) was decidedly imperfect. Jasmine manages to torpedo her own life as well as everyone else’s around her, resulting in a well-dressed shell of a woman who talks to herself and drinks Stoli martinis like they’re going out of style. Written and directed by Woody Allen, this film is very reminiscent of A Streetcar Named Desire. Bobby Cannavale is definitely no Marlon Brando, but Blanchette is a fabulous stand-in for Vivien Leigh.

For anyone watching this movie, you’ll notice that Jasmine drinks an awful lot of vodka. Specifically, her drink of choice is a Stoli martini. It’s a classic, but a classic for a reason. I’ve always preferred a twist of lemon over an olive in a martini because I think the tart lemon flavor complements the vodka much better than what is essentially a ball of salt at the bottom of the glass. When watching Blue Jasmine, you really can’t drink anything but a Stoli Martini with a Twist of Lemon.

Pour a small amount of vermouth into a martini glass and swirl it around, just so it coats the sides. Pour out excess. Add vodka into a shaker with ice, and gently stir until chilled (or shake it if you’re a James Bond fan). Pour vodka into prepared glass, and top with lemon twist.

The first time I saw Blue Jasmine, I knew it would be an instant classic. It’s a story that’s timeless, but yet so current. Jasmine is a woman who is unraveling, and it’s riveting to watch it happen. Whether she can be redeemed in the end, we’ll never know. I hope so. But for tonight, raise a glass to the great Cate Blanchette, and be glad that the Oscars only happen once a year (otherwise I might need to borrow a Xanex from Jasmine to manage my excitement). Cheers!