If you’re like me, the end of November is a panic-inducing time where I realize that I have a million people on my Christmas shopping list and NO IDEA what to buy. The rise in online shopping options means that I haven’t been to a mall in years, however I almost wouldn’t mind going if it meant I could run into Claire Danes at the Saks glove department in this week’s film Shopgirl (DVD/Download).

Adapted from the novella by Steve Martin, Shopgirl stars Claire Danes as Mirabelle Buttersfield, a 20-something visual artist caught in a love triangle between clueless hipster Jeremy and emotionally distant millionaire Ray. Steve Martin’s performance as Ray is quiet and nuanced, and refreshingly different from his broader comedic roles.  And as the well-meaning but utterly oblivious suitor Jeremy, Jason Schwartzman brings to mind so many hapless men of his generation.  With less-than-ideal romantic options such as these, it’s no wonder Mirabelle spirals into depression.

I love that one of Jeremy’s steps toward maturing is a newfound appreciation for cocktails. He tries a mojito for the first time, and we see the wheels spinning. Yes- there is more to life than cheap beer. As further ode to this film’s stunning visual depiction of the city of Los Angeles, while watching Shopgirl I recommend drinking an Echo Park Mojito.

Pour blood orange juice, lime juice, and simple syrup into a glass. Add the mint leaves and muddle them. Add rum and crushed ice, then top the rest of the way with Topo Chico. Stir gently.  Garnish with fresh mint. 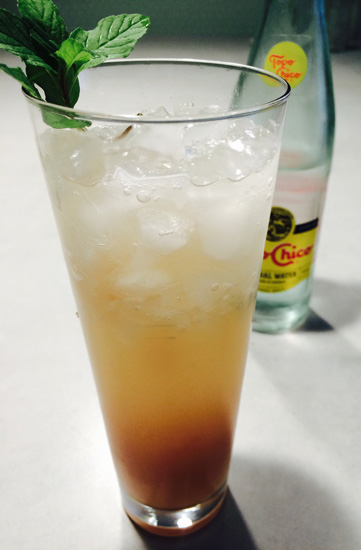 I can identify with Mirabelle’s plight of having to take a retail job to support her dreams of being an artist, because I too have been a shopgirl in the past. It’s just what you do when you have a creative dream. You stand behind that counter and hope that maybe someday, somebody looks at you and declares, “this one has value”. And in the meantime, there are cocktails.  Cheers!