Looking back, I think my love of dystopian Christmas films originated with this week’s pick Go (DVD/Download). For a sullen girl in the 90’s, this film about drug dealers, burnouts, and Timothy Olymphant’s upper body was everything I could ever want. Watching it now, as a semi-jaded adult who still questions the “magic” of the holidays among traffic jams, retail spam, and airline price gouging, it still resonates.

Told in a series of vignettes centered around a drug deal gone bad, we see the Christmas holiday from multiple points of view. There’s the entrepreneurial, desperate Ronna (played wonderfully by Sarah Polley), who’s just trying to keep a roof over her head by selling counterfeit Ecstasy to unsuspecting teens at a rave (so 90’s). Then there’s hot drug dealer Todd, played by a very young Timothy Olymphant, who gets screwed over by Ronna, but still wants to seduce her friend Claire (played by fresh-off-the-Creek Katie Holmes). Todd loans his credit card to Simon, who works with Ronna and Claire, for use on a wild Vegas getaway where he ends up stealing a car with Taye Diggs and shooting up a strip club. Then there’s Scott Wolf and Jay Mohr, a couple of TV actors participating in a failed drug bust who later run Ronna over with their Miata. As the plots all intersect and the characters find themselves converging at a warehouse rave on the outskirts of LA, we almost forget that it’s Christmas. Most of these people had given up on the idea of a jolly holiday years ago.

Although there isn’t much alcohol in this movie (save for some strip-club champagne), there are drugs.  Specifically Ecstasy.  And what goes with Ecstasy better than orange juice? (Not that I would know from experience or anything. I definitely don’t….). While watching Go, dive right into the Christmas underbelly with a Xerxes X-mas cocktail.

Pour orange juice, vodka, Grand Marnier and lime juice over ice in a cocktail shaker. Stir to combine and chill, then strain into a chilled coupe glass. Top with champagne, and orange twist. 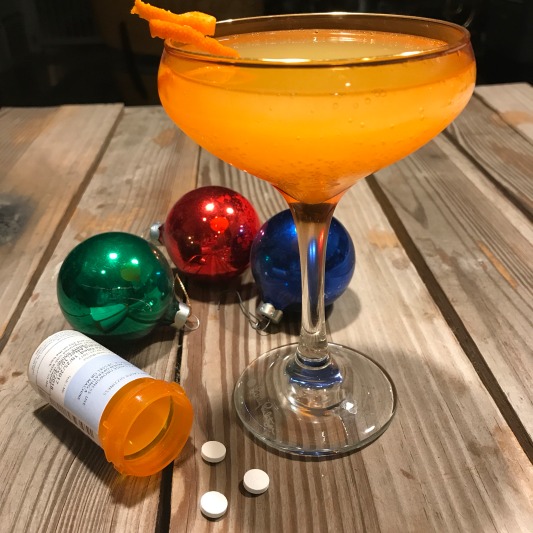 It’s really easy to be cynical around the holidays because, well, not much is actually different. The money woes you had in November are still there in December, you’re continuing to clock in at a job that may or may not be of the dead-end variety, and all the mistletoe in the world doesn’t necessarily equate to true love. But for one crazy night, sometimes it’s OK to just Go. Whatever that word may mean to you, wherever it may lead, just GO. Cheers!