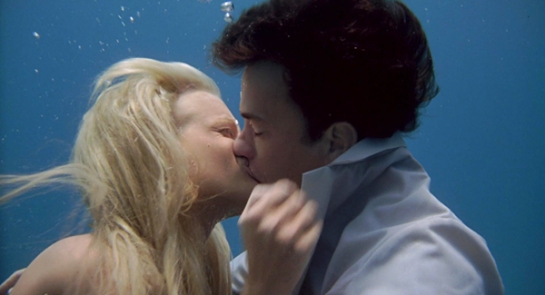 I know I’m supposed to care about modern underwater extravaganzas like Aquaman, but the truth is I’ve never gotten over my first deep-sea movie love:  Splash (Disc/Download).  Even The Little Mermaid pales in comparison to this delightful Tom Hanks/Daryl Hannah rom-com about a man who falls in love with a mermaid.  Funny and charming, with some pretty impressive fishtail effects, this film is a sea fantasy come to life.

When I was young, I totally wanted to be Daryl Hannah.  Alas, all the Morton’s salt in the world couldn’t turn my legs to scales and my hair into a soft, flowing nest of crimped perfection.  As mermaid Madison, she learns English in a single afternoon by watching daytime TV, goes on a Bloomingdale’s shopping spree, and somehow learns how to ice skate despite the fact that she’s never seen ice before.  Plus, she makes the wise decision early on to fall for Tom Hanks.  He’s the kind of guy who offers to get her a hotel room, even after she’s slept with him, because he knows their afternoon delight DOESN’T AUTOMATICALLY OBLIGATE HER TO DO MORE.  He’s the kind of guy who keeps fish tanks in every room because he’s never gotten over the mermaid who saved him as a little boy.  And he’s the kind of guy who will give up a lifetime of John Candy’s jokes for his one true love.  This man is a keeper.

Speaking of John Candy, he plays Hanks’ off-color, sleazy brother with a schlubby, good-hearted charm.  Sure he’s a walking sexual harassment lawsuit, but he also dispenses wisdom like, “Drinking is a matter of algebraic ratio.  It’s not that you had too much to drink; it’s that you’re too skinny.”  SO TRUE.  While watching Splash, capture the flavor of the ocean with some Himalayan Salt shot glasses, and this tasty cocktail:

Combine vodka, orange liqueur, and lime juice in a shaker with ice.  Shake until chilled, then pour into Himalayan Salt glasses.  Garnish with a lime wedge.

Rumor has it this film is being remade with a gender swap, but I’ll always love the original because it celebrates a mermaid who doesn’t have to change herself to fit into a man’s world.  Her world is pretty awesome already, and if a guy wants to be with her, he’s just going to have to hang out underwater and kiss her constantly for the rest of his life.  Now THAT’S a happily ever after.  Cheers!