Yes, yes, I know, Woody Allen is #cancelled.  And rightly so. But you know what isn’t cancelled?  My trip to Barcelona!  That’s right, Cinema Sips is headed to España this week, where I intend to drink all the cava in the city before flying off to a Menorcan cheese farm (because wine + cheese is YES).  To give all you readers a taste of my getaway, I’m featuring a movie steeped in Gaudí, glasses of Rioja, and strong female performances—Vicky Cristina Barcelona (Disc/Download).

Starring Scarlett Johanssen and Rebecca Hall, this film about two American students and their romantic entanglements with a Spanish artist (Javier Bardem) feels like a step back in time. It’s the sort of dialogue-heavy, sexually freewheeling, location-specific movie that would have gotten made in the early 1970s, before focus groups and big budgets sucked the life out of everything. Shot in Barcelona and the small city of Oviedo, the country of Spain is its own character within the story—costumed in sun-drenched days, mosaic-covered buildings, and red wine-stained tablecloths.   I love films where the setting is key, and truly I don’t think this story could happen anywhere else.  You need the passion and fiery history of this place to make sense of Penélope Cruz’s crazy ex-wife character Maria-Elena, who goes toe-to-toe with her real life husband Bardem in an Oscar-winning performance. It just wouldn’t have the same impact if the film was shot in, say, London.  The viewer needs Spain to understand that sometimes, women go a little crazy.  I blame the absurdly low price-point of wine.

Speaking of booze, I may have gone over my weekly quota at this point.  But when it’s cheaper than Diet Coke, AND I’m on vacation, what’s a girl to do? While watching Vicky Cristina Barcelona, I recommend drinking a glass (or three) of Red Wine Sangria.

Combine wine, brandy, orange juice, and sugar in a pot over heat until sugar dissolves.  Add the fruit, and refrigerate until chilled, about 1 hour.  Once chilled, add the club soda.  Serve in glasses over ice.

The thing about Vicky Cristina Barcelona is that none of the characters are likeable.  They’re all incredibly self-indulgent, make terrible choices, and betray one another left and right.  And yet, I really enjoy it.  Maybe I want to live vicariously, to imagine what it would be like to run off for the weekend with a sexy Spanish artist.  But when it comes down to it, I think I prefer running off for a whole lifetime with a sexy American artist.  Cheers!

My apologies in advance for the shameless promotion this week, but I just can’t help it. I am SO excited for the publication of my husband’s newest book Draw Like This!, a fun and instructional guide for budding artists. Seriously, I wish I’d had this book when I was in art class.  It would have saved me so much stress and eraser smudging. I’ve had my share of art teachers over the years, and many of them could have inspired Illeana Douglas’ character in this week’s film Ghost World (DVD/Download). Chunky jewelry, a checkered past, and a heavy appreciation of symbolism are apparently all you need to cut it as an art instructor. And if all else fails, set up a student critique and call it a day.

Based on the graphic novel by Daniel Clowes, Ghost World is probably in my top ten all-time favorite films. Perhaps it’s because I was Enid in high school- jaded against my hometown, indifferent about the future, and worshipful of anything weird or different. And yes, that includes Steve Buscemi (still a movie-star crush of mine). I had the colored hair, the sketchbook, the vinyl records, and the scowl.  The story of Enid and her best friend Rebecca (played by a very young Scarlett Johansson) growing apart is so honest, and very true of the journey most of us take in young adulthood. We have to figure out ourselves first before we can figure out how to relate to other people.

Let’s face it, late adolescence is all about making bad choices. Not that I would call drinking too much champagne and sleeping with nice-guy Steve Buscemi a bad choice per-se, but for Enid it isn’t the smartest move. While watching Ghost World, I recommend drinking a One Night Stand.

Place brown sugar in the bottom of a coupe glass, and top with bitters.  Add brandy, then top with champagne until full.  Garnish with an orange twist. 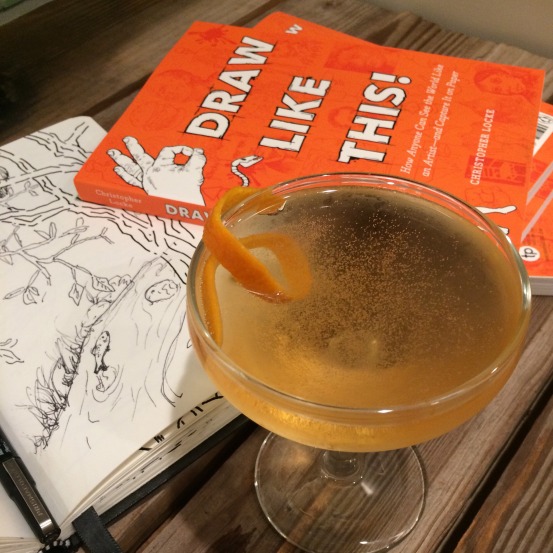 As I think about what it means to be an artist, I realize that making great art is not about shocking viewers or arbitrarily assigning deep meaning to something ordinary. To me, it’s about finding what you enjoy, sticking with it, and finding your own voice. Whether it’s writing or drawing, any good teacher would tell you that practice is what makes the difference between success and failure. Of course, it helps to have some really great technical advice along the way (like the lessons in Draw Like This!). And, maybe some chunky jewelry. Cheers! 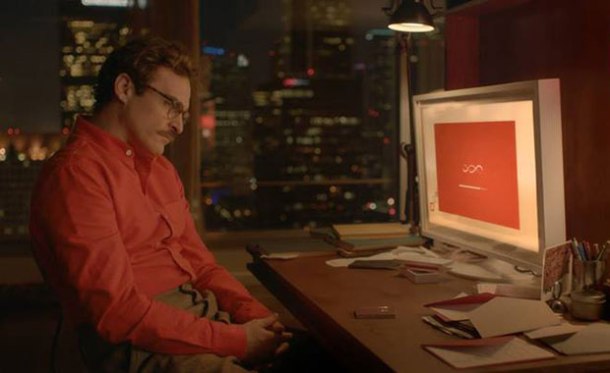 Although I had already seen this week’s film Her (DVD/Download) while it was in movie theaters last year, I decided it was time to check it out again, this time with my significant other and a lovely, bright cocktail. This was by far my favorite film of 2013, calling to mind other personal favorites like Eternal Sunshine of the Spotless Mind and Lost in Translation. It’s an unconventional love story, set against the backdrop of futuristic urban beauty, and  moody instrumental music. I was thrilled when this film won the Academy Award for Best Original Screenplay because the script by Spike Jonze is truly beautiful. It makes me want to give up writing altogether because I fear that I’ll never be able to string words together as perfectly as he does in this film. Nevertheless, I was thrilled to sit back and let this lovely film wash over me once again.

Her is set in the future, however it feels like a just-out-of-reach future. People basically wear what we wear now (though men’s trousers are a bit more high-waisted), and spend their days glued to their smart phones. The architecture is a little more interesting, and most people don’t read books on paper anymore. Additionally, writing has become such a lost art that the main character Theodore (played superbly by Joaquin Phoenix) has a job crafting personal letters on behalf of others. It’s interesting to watch him writing these romantic love letters while his own love life is crumbling, as he’s still reeling from the dissolution of his marriage. Early on in the film, he gets a new computer operating system, but this OS named Samantha can actually talk to him. They begin a relationship, eventually falling in love. It sounds crazy to think that a man could fall in love with his computer, but oddly enough this is one of the most romantic stories I’ve seen on film in recent years. He’s happy with Samantha (voiced perfectly by Scarlett Johansson) and watching their romance progress is just riveting. I’ve often found that most literary love stories are totally ruined in their translation to film, simply because what I see on the screen never really matches up to the picture I’ve created in my mind. By taking away a physical half in this relationship, Spike Jonze has made a romantic film for the dreamers out there. Samantha the OS is anything I want her to be.

When I started raving about this film many months ago, I had another friend dismiss it by saying “ugh, too much orange.” Well, that’s true, there are a lot of warm colors used in the production design. I actually love all the orange though. Perhaps the reason is because I will always associate the color orange with my time spent studying in Valencia, Spain during college. The city was vibrant and alive, with futuristic architecture by Santiago Calatrava, and I found myself gravitating to bold oranges and reds both in my clothing and design choices. Thus my drink this week is inspired by that time in my life, and really does pair nicely with Her. This week, I’m enjoying Agua de Valencia.

In a large pitcher or bottle, combine all ingredients, adding sugar a little at a time until you get it to your desired sweetness. Chill for an hour, then serve in ice-filled glasses.

This is a great drink for a crowd because it can (and should) be made in advance of your party, and it’s refreshing on those hot days where should be autumn, but unfortunately still feels like summer (hello September in Texas). The drink is a beautiful yellow-orange color, and feels right at home with the visual styling of this film. The characters in Her might be a little lost, and a little sad at times, but they still seem hopeful to me. After watching this, I find myself feeling hopeful too, for even if we’re all eventually tethered to our technology, we’ll still find ways to make personal connections. That’s a world that I’ll still want to live in. Only, don’t expect me to wear unflattering trousers. Cheers!

This week’s selection was a bit of a challenge. In my opinion, a blog on cocktail and movie pairings wouldn’t be complete without Sofia Coppola’s 2003 masterpiece Lost in Translation. Set in Tokyo, this unexpected love story features Bill Murray in one of his finest roles, playing an American movie star sent to Japan to endorse a whiskey. While there, he meets Scarlett Johansson’s character Charlotte, a fellow American and malcontent. They share a drink at a swanky hotel bar, and spend the rest of the movie exploring Tokyo and maybe possibly falling in love.

The reason I say that this selection was challenging is because I personally am not a frequent whiskey drinker. I skew more toward gin and vodka concoctions, which for this movie seems all wrong. Bill Murray does a fantastic job of selling us on Suntory whiskey, and by the end of the film I want to drink a glass on the rocks and do goofy impersonations of the Rat Pack, just like him. So here’s what I suggest. If you like whiskey, buy this movie and a bottle of Suntory’s Hibiki blended single-malt, drink a glass or two and imagine you’re as cool as Bill Murray.

However, for the non-whiskey drinkers of the world, I’ve come up with a cocktail that I personally enjoy and that also stays true to the spirit of the film- The Whiskey Amour.

Combine all the liquid ingredients into a cocktail shaker filled with ice. Shake and strain into glass, garnish with grapefruit twist.

This drink is basically a Brown Derby, but I like to sweeten it a bit by adding more honey syrup than is typically called for. In relation to the film, it works on several levels. I’m using an American whiskey as a nod to the two American protagonists. The pink hue of the grapefruit juice references the opening scene of the film, and the honey references the music over the final scene of the film. This cocktail is to be enjoyed while you’re marveling at the amazing shots of Tokyo, and yearning for Charlotte to leave her hipster husband and run into Mr. Bob Harris’ arms. Drink enough and you may be tempted to sing along during the karaoke scene. Drink too much and you’ll be singing along with Sausalito.

What this week has taught me is that sometimes life surprises you. Whether it’s a May-December romance in Tokyo or a bourbon cocktail in your living room, the best experiences are often the ones you never saw coming. Cheers!