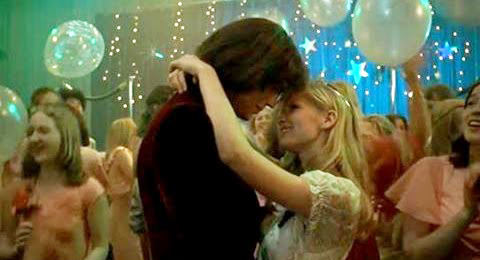 Ninety-nine percent of the time, I watch an adaptation of a work of literary fiction and think, “The book was better.” But The Virgin Suicides (Disc/Download) is one film where this phrase does not apply. Though I loved Jeffrey Eugenides’ novel, Sofia Coppola made me see things within the pages that I missed the first time around. The angst of adolescence, the impulsivity, the dreaminess—I definitely need a cocktail if I’m going to put myself back in the mind of a thirteen-year-old girl.

Starring Kirsten Dunst as the rebel within a family of five beautiful sisters, the film’s narration uses Eugenides’ words as a roadmap, treating us to his gorgeous prose. Set in 1970’s suburban Detroit, we get to know the Lisbon sisters through the eyes of their admirers, a group of hopelessly besotted neighborhood boys. When one of the sisters commits suicide, their overbearing parents (James Woods and Kathleen Turner) place the remaining girls under house arrest, and their only contact with the outside world is through their vinyl collection and a vintage phone. The boys try to rescue them, but that’s the thing about being a teenage girl—nobody can really save you from it.

One of my favorite parts of the film is when the Lisbon sisters attend a homecoming dance. They laugh and drink peach schnapps and make out with inappropriate boys, and it’s such a microcosm of what we expect adolescence to be, but rarely is. For these characters, it was like a dream that couldn’t last. While watching The Virgin Suicides, celebrate the hope of being a teenage girl with a First Blush.

Pour chilled peach schnapps and grenadine into a flute, and top with champagne.

What Sofia Coppola does so well as a director is capture a specific time and place with her unique artistic flair. ‘70s suburbia looks like a Formica fantasy filled with patterned wallpaper, female grooming detritus, and records strewn across the floor. It looks like a place where nothing bad could ever happen, until of course, it does. It always does. Cheers!

As if I needed another excuse to drink champagne and eat French macarons- HA! Cocktails & Corsets month shifts to Versailles this week with the film Marie Antoinette (DVD/Download). Written and directed by Sofia Coppola, it truly is quite the female fantasy. Silk, ruffles, pretty pastries, champagne overflowing coupe glasses, and tiny adorable dogs- damn it was good to be a French royal in the mid-18th century! (well, until the peasants revolted and stormed the palace, but let’s not go there).

Inspired by the book by Antonia Fraser, Kirsten Dunst’s Marie Antoinette is simply a young girl with extraordinary privilege and power, in the wrong place at the wrong time. She seems too naïve to realize that it’s a big deal to have your royal subjects starving while you and your friends are living bucolic, lazy days in the French countryside. Why not let them eat cake when bread has become scarce? Cake is amazing. At least, the cakes in this film look amazing. The delectable sweet treats are in line with the clothes, the shoes, the actual Versailles interiors, and the incredible wig achievements that this film beautifully showcases. If the dialogue’s a little sparse, it’s only because it’s almost unnecessary against such beauty. The 80’s New Wave soundtrack and sly inclusion of Chuck Taylors in the bedroom reminds us of the similarities between these French royals and today’s modern wealthy- drunk on money, power and fame. Eventually, it will all come crashing down.

Apparently champagne was preferable to any other beverage in Marie Antoinette’s day. I think I only spied water once, and even then it was in a crystal martini glass.  This sparkling beverage goes very well with all the delicious tarts and pastries on full display, and by adding some berry flavors it’s almost like dessert in a glass. While watching Marie Antoinette, I recommend drinking a Versailles Sparkler.

First make a raspberry syrup.  Muddle fresh raspberries through a sieve, straining out the seeds.  Mix with a dash of simple syrup, then pour mixture into the bottom of a coupe glass.   Top with crème de cassis, then chilled champagne. Garnish with raspberries. 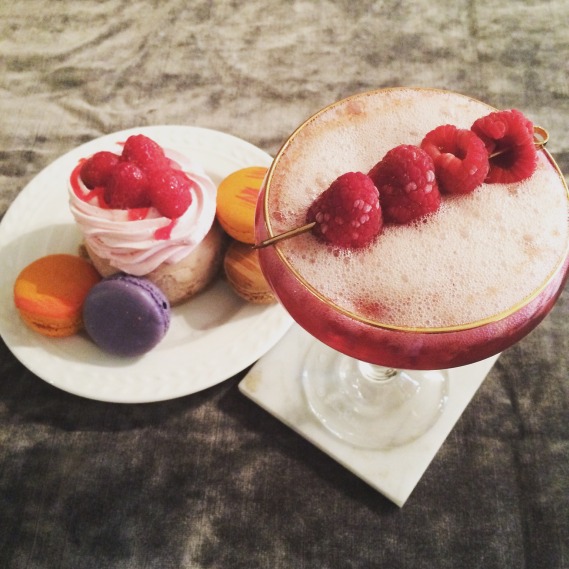 In addition to copious amounts of champagne, I’d also recommend stopping by your local bakery and picking up some delicacies to enjoy during the 2-hour running time. Marie Antoinette might have been spoiled, vapid, and naïve, but two things are certain- she knew how to dress, and she knew how to drink. Cheers!

This week’s selection was a bit of a challenge. In my opinion, a blog on cocktail and movie pairings wouldn’t be complete without Sofia Coppola’s 2003 masterpiece Lost in Translation. Set in Tokyo, this unexpected love story features Bill Murray in one of his finest roles, playing an American movie star sent to Japan to endorse a whiskey. While there, he meets Scarlett Johansson’s character Charlotte, a fellow American and malcontent. They share a drink at a swanky hotel bar, and spend the rest of the movie exploring Tokyo and maybe possibly falling in love.

The reason I say that this selection was challenging is because I personally am not a frequent whiskey drinker. I skew more toward gin and vodka concoctions, which for this movie seems all wrong. Bill Murray does a fantastic job of selling us on Suntory whiskey, and by the end of the film I want to drink a glass on the rocks and do goofy impersonations of the Rat Pack, just like him. So here’s what I suggest. If you like whiskey, buy this movie and a bottle of Suntory’s Hibiki blended single-malt, drink a glass or two and imagine you’re as cool as Bill Murray.

However, for the non-whiskey drinkers of the world, I’ve come up with a cocktail that I personally enjoy and that also stays true to the spirit of the film- The Whiskey Amour.

Combine all the liquid ingredients into a cocktail shaker filled with ice. Shake and strain into glass, garnish with grapefruit twist.

This drink is basically a Brown Derby, but I like to sweeten it a bit by adding more honey syrup than is typically called for. In relation to the film, it works on several levels. I’m using an American whiskey as a nod to the two American protagonists. The pink hue of the grapefruit juice references the opening scene of the film, and the honey references the music over the final scene of the film. This cocktail is to be enjoyed while you’re marveling at the amazing shots of Tokyo, and yearning for Charlotte to leave her hipster husband and run into Mr. Bob Harris’ arms. Drink enough and you may be tempted to sing along during the karaoke scene. Drink too much and you’ll be singing along with Sausalito.

What this week has taught me is that sometimes life surprises you. Whether it’s a May-December romance in Tokyo or a bourbon cocktail in your living room, the best experiences are often the ones you never saw coming. Cheers!